Discovery: That’s what makes the Sundance Film Festival so fascinating year after year. But that also can be what makes it so frustrating for a would-be attendee. With 120 features and a handful of shorts programs to choose from, how do you get a sense for where to spend your time and money when the catalog is full of rookie directors, fledgling actors and other unknown quantities?

In years past, Sundance has made a significant number of films available for early preview, but the practice has been curtailed. With hard data lacking, the best bet is to mix it up: Look for intriguing concepts, add a few recognizable names, and hope it all adds up to a winning festival experience.

And there are some familiar names in the lineup. In the Park City at Midnight category alone are two talented directors visiting territory with which they’ve already had great success. Michael Haneke, the provocateur behind Hidden and Code Unknown, brings an English-language remake of his unnerving thriller Funny Games. It’s hard to imagine a second version being as deeply disturbing as the first, but those unfamiliar with the original are bound to be in for a memorable experience. Also among the Midnight entries is George A. Romero’s Diary of the Dead, in which the zombie master brings yet another topical spin to his favorite subject: a filmmaker’s video blog of a zombie infestation in progress.

The competition categories usually are filled with first-timers, but even there you can find something to latch on to. Directors Anna Boden and Ryan Fleck (2006’s terrific Half Nelson) return with Sugar, the story of a Dominican-born baseball player in the American minor leagues, struggling to adjust to the American heartland while taking his shot at the big time that could mean a better life for his family. Also in the Dramatic Competition, veteran character actor Clark Gregg takes on Fight Club author Chuck Palahniuk for his writing/directing debut, adapting Choke. On the documentary side, Patrick Creadon moves from the crossword enthusiasts of Wordplay to the financial instability of a debt-ridden nation in I.O.U.S.A., while the director of 1999’s On the Ropes, Nanette Burstein, explores the adolescent experience through the four Indiana high-school students of American Teen. 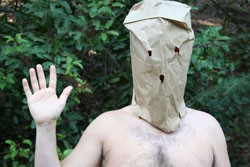 Other Sundance veterans are scattered throughout more categories. Documentary filmmaker Stacy Peralta (Dogtown and Z-Boys, Riding Giants) moves away from edgy sports histories to a chronicle of South Central Los Angeles in Made in America. Mark and Jay Duplass brought the charming road movie The Puffy Chair to Park City a few years back and return with more low-key relationship comedy in Baghead, about a quartet of would-be actors trying to write a script for themselves. The Station Agent director Tom McCarthy brings The Visitor, about a professor who discovers an immigrant couple squatting in his Manhattan apartment. And, for his first feature documentary since hitting it big with Super Size Me, Morgan Spurlock takes on America’s most wanted man by asking Where in the World is Osama bin Laden?

You’ll always find quite a few familiar names and faces in the Premieres category, as well, but it’s also good to remember that every one of them started somewhere. Spice up your Sundance menu by trying something that just looks uniquely interesting. Learn about a pair of social scientists racing against time to preserve the vocabulary of dying languages in the documentary The Linguists. Get in touch with the plight of gay zombies with Bruce LaBruce’s Midnight comedy Otto; or Up With Dead People. If you’re feeling particularly avant-garde and want a unique perspective on a local landmark, try experimental film legend James Benning’s 80-minute study of the Great Salt Lake’s Spiral Jetty, casting a glance. Your mileage will certainly vary—but a whole lot of the fun of Sundance is taking next year’s model out for a little test drive.