From past years' hits to this year's tips, a primer for what to expect from the 2016 Sundance Film Festival

by Scott Renshaw and David Riedel

Sundance 2016 Director Paths
Win, Lose or Draw, your Epitaph Lies at the End of One of These Roads.

Each year when the Sundance Film Festival rolls around, the movie pundits blow the dust from their thesauri (just kidding—the dust never settles on those things) and pontificate on the nature of the festival. Is it a career launching pad, or a Hollywood party with lift tickets?

For better or worse, there's no other festival quite like Sundance, and as a singular type of event, it's developed its own mythology. The myth goes that total nobodies and super-famous players have equal shots at making a big splash.

But what happens after being at the festival, or even winning an award? Well, there's no single answer to that question. Here are four roads out of Sundance that seem to be the most traveled:

• The "It's a farm club for future big-swingin'-dick Hollywood directors" road:

Take a look at some of the festival's most successful alums, and you'll find a common thread: They have only a few feature films under their belts, but they're nonetheless entrusted with enormous franchises.

Colin Trevorrow's second feature as director was Jurassic World. His first, Safety Not Guaranteed, was in the U.S. Dramatic Competition at Sundance 2012, where it won the Screenplay Award. It's easy to see Safety's indie bona fides (the presence of Mark Duplass and Jake Johnson, for instance), but not necessarily what made Jurassic World's producers say, "Hey, this is the guy who's gonna reboot our hugely successful dinosaur franchise." Nonetheless, he got the nod to helm World, and—understatement alert—that decision paid off: It was the biggest movie of 2015 until Star Wars showed up (and maybe it still is, depending on how grosses are counted). And, as it happens, Trevorrow has also been announced to direct Episode IX of the Star Wars franchise. 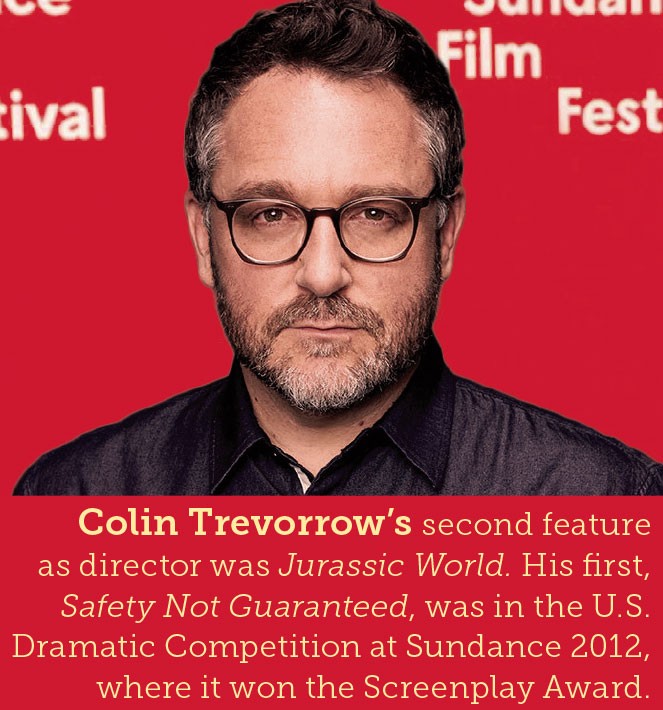 Unlike Trevorrow, Catherine Hardwicke didn't leap from winning the Directing Award for her 2003 Sundance hit thirteen directly to Twilight—probably because of sexism, but that would be lobbing accusations I can't prove. She directed two medium-size features in between, Lords of Dogtown (a surfing movie) and The Nativity Story (a Jesus flick), then got the Twilight gig. Say what you will about the Twilight series, Hardwicke's entry at least has the distinction of being one of the best-reviewed in a series that critics love to crap on.

Finally, much like Trevorrow, Ryan Coogler went from being an indie darling—Fruitvale Station won the Grand Jury Prize and the Audience Award for drama in 2013—to a franchise guy. For his second feature, Coogler brought Rocky Balboa back from the proverbial dead. Sylvester Stallone had retired the champ after Rocky Balboa. Coogler, because of a well-documented love of Rocky movies, pitched Stallone a story in which Rocky's pal Apollo Creed has a son (Michael B. Jordan) who's gotta do what he's gotta do. Coogler's transition from small personal indie director to blockbuster helmer seems like a big leap until you realize that, just like Fruitvale Station, Creed is a personal story—it's just on a much bigger scale. Coogler's next assignment is directing Marvel Studios' Black Panther adaptation. Making arguably the best Rocky movie has its perks.

The "Do some movies, but find your footing in television" road:

Now that working in TV doesn't have the funk of failure—some of us would argue there's better work being done these days on the small screen, if a 65-inch screen can be considered "small"—it's become a go-to medium for past Sundance favorites.

After winning the directing award in 2009 for Sin Nombre, Cary Joji Fukunaga directed a well-received but little-seen adaptation of Jane Eyre. He followed it with a short, and then directed all eight episodes of the first season of HBO's successful True Detective. Fukunaga's direction elevated Nic Pizzolatto's scripts, which were sometimes dripping with bathos, to make the first season a must-watch. After Pizzolatto and Fukunaga parted ways, Fukunaga made this year's decent-but-not-great Beasts of No Nation (alternate title: Child Soldiering 101) for Netflix.

Edward Burns' 1995 Sundance Grand Jury Prize-winner The Brothers McMullen isn't particularly great. It feels long at 98 minutes, it basks in Irish stereotypes, and it looks like the 16mm film was covered in a thin layer of grime before it was exposed. Still, it's about as indie as Sundance gets; Burns made the movie for $25,000 while he was a production assistant at Entertainment Tonight. In short: He was no one. His follow-up movies haven't fared so well, though The Fitzgerald Family Christmas and Purple Violets are worth watching. Burns finally achieved across-the-board critical acclaim with Public Morals, a TNT period cops-and-gangsters series that died after one season. Such is life, but what Burns does next will be worth seeing.

Nicole Kassell's debut feature, The Woodsman, starring Kevin Bacon as a maybe-reformed child molester, was nominated for the Grand Jury Prize in 2004 but lost out to Shane Carruth's Primer, an excellent film with a noted absence of child molestation. Kassell's second feature was the critically reviled Kate Hudson vehicle A Little Bit of Heaven. Kassell has fared much better in television, however, directing episodes of highly regarded shows such as The Following, Better Call Saul and The Killing. Rumors of a Kassell-directed big screen version of Arthur Miller's The Ride Down Mt. Morgan have floated around for years, but so far, the project hasn't surfaced.

The "Directors lucky enough to become their own brands" road:

Honestly, would you rather watch Kevin Smith's Mallrats, or listen to its DVD commentary track? Smith came onto the scene when Clerks was a big deal at the 1994 festival. Then Mallrats happened. Then Smith came back, sort of, with Chasing Amy (which hasn't aged well). Then he made a movie about God, and then disappeared so far up his own ass (Jay and Silent Bob Strike Back), it's a wonder he made it back. Smith's SModcast empire (a series of podcasts) has roughly a bajillion shows, many of which are hosted by Smith, and if you find his brand of humor funny, it's maybe the best thing on the Internet. Smith has, despite his own protestations, improved as a film director, if Red State and Tusk are barometers. Next up: This year's Sundance entry Yoga Hosers (starring his daughter and Johnny Depp), then Clerks III.

Much like Smith and Burns, Robert Rodriguez was a nobody when his debut feature showed at Sundance. El Mariachi (made for just $7,000, according to lore) was shut out of the Grand Jury Prize in 1993, but won the Audience Award. Since then, Rodriguez has been churning out films in which he's director and screenwriter and composer and shooter and editor (he could farm that particular gig out more often, really) and a bunch of other jobs. Except for the oddly sluggish Sin City, his hyperkinetic directing style is instantly identifiable from picture to picture, whether it's a Spy Kids flick or one of the Machete movies. Just look for the Troublemaker Studios logo.

Morgan Spurlock got noticed with Super Size Me, which won the 2004 Documentary Directing award. Spurlock ate McDonald's for every meal for 30 days, then he, his then-girlfriend, and doctors watched in horror (and a little bemusement) as his body went to shit. Since then, Spurlock has made several other documentaries like The Greatest Movie Ever Sold in which he has been the star, as well as his CNN show Morgan Spurlock Inside Man. He's made the occasional Spurlock-less film (the mostly-a-concert film One Direction: This Is Us), but would you rather watch a boy band or a guy in his late 30s getting fat?

Finally, there's the sad trombone road: "Those who fade into obscurity or semi-obscurity" road:

If you know who Wendell B. Harris Jr. is, you're either a fan of early Steven Soderbergh and Todd Phillips, or one of the few people who has seen Chameleon Street, Harris' 1990 Dramatic prize-winner. Harris wrote, directed, and stars in the film as William Street, a man who changes his identity at will to get ahead. It's an unfortunately little-seen and inventive piece of filmmaking. To hear Harris tell it, he couldn't convince distributors to take the film. Harris told 20/20 in 1991, "[There was] an uncomfortable reaction to what [distributors] perceived what white America would think when Chameleon Street was shown." Outside of Chameleon Street, Harris has appeared in Soderbergh's Out of Sight and Phillips' Road Trip. He's tops in both.

Debra Granik has won at Sundance twice, for directing Down to the Bone in 2004 and for co-writing and directing Winter's Bone in 2010. In 2014, she released Stray Dog, a documentary about Ronnie Hall, a man she met while making Winter's Bone (he has a small part in the movie). In 2015, Granik told the now-defunct movie website The Dissolve that she wrote a couple scripts after Winter's Bone, one of which didn't turn into a movie, and another of which worked its way into a new project.

In 1985, the year the Coen brothers' Blood Simple won the Grand Jury Prize, Adam Brooks' Almost You won the Special Jury Prize. Since then, Brooks wrote and directed the Ryan Reynolds vehicle Definitely, Maybe (meh), was one of four writers credited on Bridget Jones: The Edge of Reason (ugh) and one of three credited on Practical Magic (gah!), which was directed by Almost You's lead, Griffin Dunne. Brooks also wrote Last Vegas (double barf). How is it that Brooks is working, but Harris isn't?

With the 2016 festival upon us, how will the new winners (and almost-winners) fare? Check back next year. The filmmaker who will take over the Batman/Superman franchise from Zack Snyder might be submitting this year's $30,000 Audience Award winner.