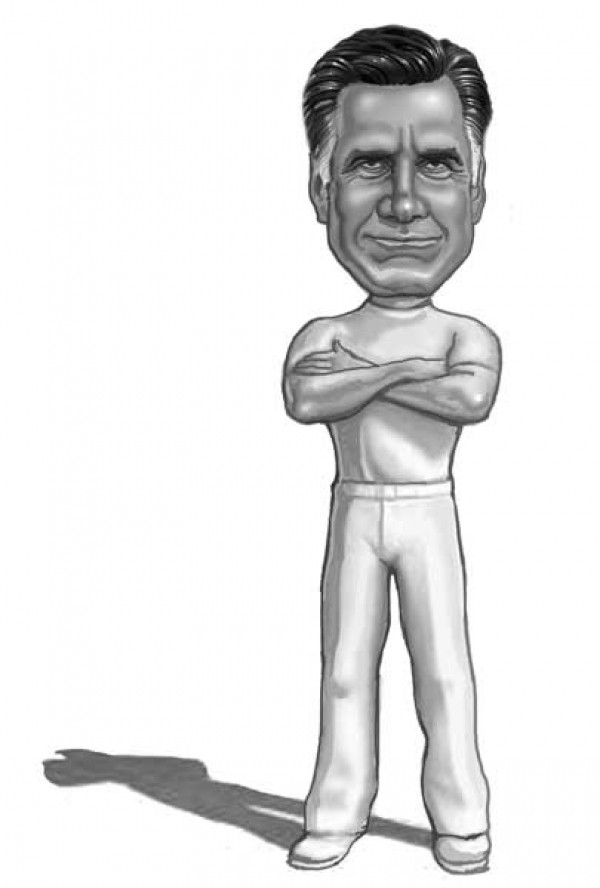 “Without a word, he joined me and started helpfully plucking clothes from around the room and folding them. By the time Mit(t) left, not only did I feel welcome, my laundry was done.” —Mormon mom recalling how Bishop Romney paid a visit to her laundry-strewn house soon after her family moved into the local LDS ward

Speaking just for me, the speech by the Mormon mom, meant to humanize the wooden nominee, was the highlight of last week’s Republican Convention. Memories came flooding back of my mission days with Elder Romney in Paris. The first thing I noticed about Elder Romney when we moved in together in our garret in the Rue de Grande Frommage in the 17th arrondissement was what a good folder of laundry he was: Unlike most missionaries, he didn’t just toss fresh laundry into a drawer, he made damn sure everything was folded just right.

Elder Romney had a knack for spotting unfolded laundry. Many is the time we would knock on a door of some messy apartment to bring our special message of joy to the stiff-necked citizens of Paris, and somehow Elder Romney would catch a glimpse of unfolded laundry hanging from a door knob or light fixture or TV antenna. The next thing you knew, he was making a beeline to a freshly laundered but wrinkled chemise, and before a startled mademoiselle could even say a word, the chemise was smoothed out, neatly folded and ready to be hung in the closet.

Sometimes my old missionary companion gets tagged, quite unfairly, in my opinion, as a bit of a prig, but he didn’t at all differentiate between outer garments and undergarments, laundry-wise. Whether confronted with modest blouse or a lacy brassiere, Mit(t) just rolled up his sleeves and went to work. It was all the same to him.

But it wasn’t just the laundry of strangers that Elder Romney showed such an affinity for. Very quickly word got around the mission that Mit(t) was a whiz at laundry—not just the folding part, but the soaking, washing, rinsing and drying parts, as well. Piles of soiled outer garments and undergarments would appear outside our room. And you can just imagine how soiled our unmentionables would get in the steamy Parisian summers. But he never complained; in fact, he saw it as a challenge, boning up on bleaching agents and detergents and figuring out just how far you could push various fabrics in the squeezing and twisting department.

It wasn’t long before Elder Romney made a name for himself around our neighborhood. He became known as Elder Mr. Clean, or in the French vernacular, Monsieur Ancien Nettoyer. People would stop him on the street and ask for advice on how to get out stubborn stains (the French were forever spilling food or wine on themselves). On occasion, some desperate soul would take off the soiled article in question—shirts, socks, trousers, skirts, blouses, lingerie, you name it—and hand it to my companion, Elder Clean. Particularly difficult were items saturated with cigarette smoke: The French smoked like chimneys, especially those stinky Gauloises, which smelled like sun-ripened horse apples.

I have to say, however, it was a great way to get people interested in the church, though most of the time once the investigators got their laundry back—freshly clean and neatly folded—they lost interest in hearing stories from the Le Livre de Mormon, even exciting tales about Captain Moroni, Shiz or Samuel the Lamanite.

I expected that after our mission, Mit(t)’s deep commitment to doing laundry would fade, what with making money, bringing spirits to Earth to get bodies and progressing to the highest office in the land, which he has rightly regarded as his birthright. But I was always pleasantly surprised that whenever we got together, the first thing my old missionary companion would do was to fold my laundry. He never lost his touch for folding, getting all the seams and edges to line up perfectly.

One aspect of the Mormon mom’s humanizing story of Bishop Romney doing her laundry is what it cost him on the domestic front. After their marriage, Sister Romney took over the laundry duties, though Mit(t) always made sure the folding was up to snuff. It’s not well known, but my old missionary companion caught H-E Double Hockey sticks when he got home from doing another wife’s laundry.

For months afterward, Mit(t) did all the laundry at his house, and not just the folding part.