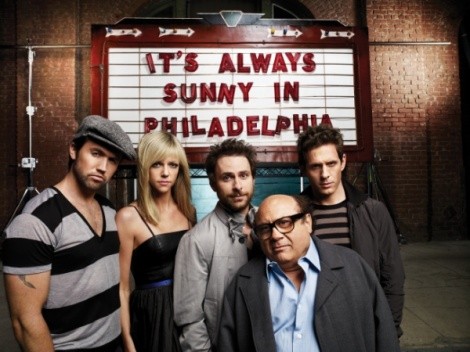 
Season Finales: Best season ever of It’s Always Sunny In Philadelphia? Highly subjective, like saying the most recent run of Entourage was its absolute worst—which it was, and now they want to make two more and an Entourage movie? The “boys” have become as listless as that collection of leather handbags known as the Sex and the City cast. Not so with the Philly gang, who graduated from simply un-P.C. to WTFingF? this season with a cartoonish bravado to rival anything on HBO or Showtime (and that’s not even counting the DVD-only A Very Sunny Christmas—recommended for your next family holiday gathering). Which only made FX’s new comedy entry The League look more anemic, but at least it’s better than anything else they’ve attempted to pair Sunny with. Since fantasy football is equally funny and pathetic, it’s still a tough sell for The Only TV Column That Matters™.

Dexter, Californication
Sunday, Dec. 13 (Showtime)
Season Finales: It’ll be sad to see the Trinity Killer (John Lithgow) go; he’s the best, creepiest and most fascinating adversary Dexter (Michael C. Hall) has faced over four seasons. Then again, maybe he’ll stick around in some form—better him than Rita (sorry, Julie Benz). Sure, the late-breaking “daughter” plot twist and the onboring LaGuerta/Batista romance were useless distractions, but this season of Dexter has proven that a series about a domesticated serial killer has more sustainable life in it that previously imagined. Same goes for Californication’s horndog writer Hank Moody (David Duchovny); any fears that he’s lost his grounding and soul will be allayed in the surprisingly heartbreaking season finale. It ain’t pretty, but it was necessary.

The Sing-Off
Monday, Dec. 14 (NBC)
Series Debut: Will reality-filler crapola like this survive the new NBC/Comcast regime? Holy Hasselhoff, let’s hope not. The Sing-Off is a four-night a capella group competition … wait, come back! I didn’t even get to the part about it being hosted by Nick Lachey! Or celeb-judged by Ben Folds and one of the Boyz II Men! And, there’s a Utah entry in the competition: Noteworthy, from Provo! Hey, if I had to stay awake to type that, you have to read it.

Better Off Ted
Tuesdays (ABC)
New Season: A long-shot sitcom survivor from ABC midseason earlier this year, Better Off Ted is as funny as critical darling Modern Family minus the subtle sentimentality and Valuable Life Lessons. Ted, about worker drones navigating life within Veridian Dynamics (an international conglomerate that develops everything from military weaponry to “cowless meat”), is more upbeat (if still deadly cynical) about corporate life than those sad-sacks over at The Office, and Portia De Rossi is the kind of evil-sexy boss Jan Levinson- Gould could only dream of being.

Gordon Ramsay: Cook-Along Live
Tuesday, Dec. 15 (Fox)
Hell’s Kitchen host Gordon Ramsay is going to scream at you, er, show you how to prepare a three-course dinner for your family—live, you donkey! Sure, you’d be eating sometime after 9 o’clock (10 Eastern), but sleeping easy with a stomach full of angel hair pasta with shrimp and chili peppers & tomatoes (appetizer), steak Diane with sautéed potatoes & peas (main course) and quick tiramisu (dessert). Me, I’ll simply be handing off a copy of Cook-Along Live to my personal assistant Jackie, who’ll be preparing this dinner at the True TV Studios (where the shamelessly unplugged True TV Podcast is recorded) on Christmas Eve. Far as you know, your invite is in the mail …