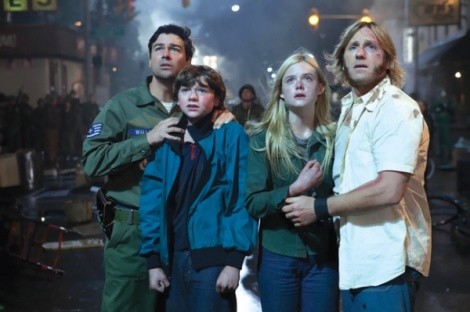 Give J.J. Abrams credit for having stones the size of bowling balls, because he practically gift-wraps the pike on which his science-fiction thriller Super 8 could be skewered. Early in the film, aspiring middle-school filmmaker Charles (Riley Griffiths) explains to his pal, Joe Lamb (Joel Courtney), why he has added new scenes to the zombie movie they’re shooting with Charles’ Super 8 camera. It can’t be just about the creatures, Charles quotes from the screenwriting books he’s been brushing up on; you have to care about the characters, so that you want them to live. Wink, wink. Nudge, nudge.

Then, for much of the first hour, Abrams delivers exactly what he knows we need, as he introduces us to the residents of small town Lillian, Ohio, circa 1979. He sets up the tragic death of Joe’s mother in a steel-mill accident, leaving him in the care of his father (Kyle Chandler), a sheriff’s deputy who doesn’t know nearly enough about his son as a person. He establishes a loose, enjoyable dynamic between Charles, Joe and the other members of their film-crew posse, including budding firebug Cary (Ryan Lee) and puke-prone lead actor Martin (Gabriel Basso). And he brings an almost effortless charm to Joe’s wide-eyed crush on classmate Alice (Elle Fanning), newly recruited to act in Charles’ movie. The kids—and Abrams’ handling of them—are so money that, for around 45 minutes of Super 8, I was enthralled by the prospect that I was watching one for the ages.

Eventually, however, it comes time for those kids to encounter … something. It begins with a magnificently staged train derailment near the depot where they’re shooting a scene for their movie, an apocalypse of raining boxcars and fuel explosions the kids barely escape with their lives—and film of the incident that could put their lives in jeopardy. As Abrams keeps his mystery hidden—and the town is plagued by weirdness like disappearing dogs and random power failures—there’s still plenty of opportunity for the story to remain an adventure involving these youngsters.

But little distractions keep tugging Super 8 away from what should have been its focus. Abrams drops signifiers of his time period—posters on the walls of the kids’ rooms, a newscast about Three Mile Island, an early Sony Walkman—without providing a compelling reason for why this story needed to be a period piece, other than a nostalgic reference to the early-period youth-oriented fantasy adventures of executive producer Steven Spielberg. Abrams turns nearly every scene into an opportunity to showcase his trademark visual fillip, adding bright blue lens flares to the Spielbergian under-the-chin awestruck-reaction shot. He provides a tragic tension between Joe’s father and Alice’s alcoholic dad (Ron Eldard) that, rather than providing Shakespearean heft, simply feels like extra sentimental baggage.

And it’s maddening, because Super 8 keeps circling around to the stuff that could have made it a classic. One gem of a scene finds Alice—in full zombie make-up, courtesy of Joe’s skills—practicing her blank-eyed undead shamble straight toward Joe. Even as she’s nailing the creepy look, she’s also got Joe transfixed as she moves toward him and leans in for his neck, leaving a smudge of lipstick. Abrams brilliantly captures the ambiguity of early adolescent romantic longing that’s also, in general, absolutely terrifying.

There’s enough of that stuff—including during the film’s climactic rescue—that Super 8 never devolves completely into rote genre action. Yet the more Abrams pulls the focus toward the hows and whys of his monster, the less uniquely charming the film becomes. And as Joe’s story seems to build inevitably toward making peace with his dad—and both of them making peace with their grief—you begin to appreciate the subtlety with which Spielberg handled Elliot’s fatherlessness in E.T even more. The deft touch that marks so many of Super 8’s best moments keeps getting knocked aside by a heavy hand.

Abrams drops another knowing nod to adventures with young protagonists when he has Charles say, during a peril-filled encounter with secretive soldiers, “We’re kids; they’re not going to kill us.” As a filmmaker, he knows exactly how to play with our expectations of this kind of movie. When he gets away from the strengths of his own story, he turns Super 8 into something merely pretty good, instead of the kind of movie other filmmakers will be making references to a generation from now.