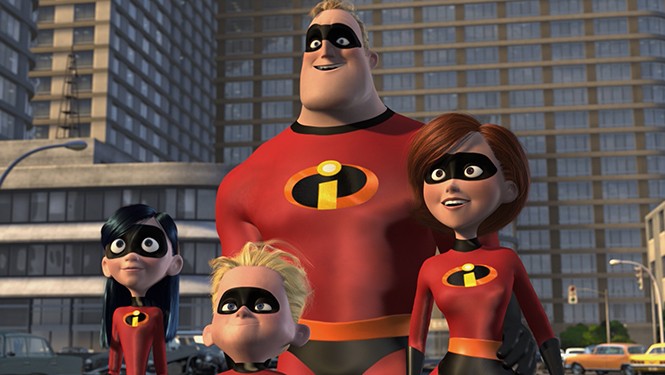 In a world gone mad, it should be easy simply to embrace Incredibles 2. Where so many franchise extensions feel like cynical cash grabs, this one emerged only when its creator believed he had a new story worth telling. It's a visual wonder, full of breathtaking set pieces and an energy that makes most modern super-hero movies feel positively inert.

So why can't I stop thinking about all the ways Brad Bird movies frustrate me?

You put yourself on thin critical ice when questioning the cinematic bona fides of the guy behind such beloved animated features as the original The Incredibles and The Iron Giant. And indeed, it's hard to argue against his status as one of the most talented contemporary craftsmen of genre adventure. But from the exceptionalism embodied by The Incredibles and Ratatouille to the dense mythology of Tomorrowland, Bird has shown himself to be philosophically ambitious—and sometimes his big ideas get in the way of his kinetic chops. If his magnificent work on Mission: Impossible – Ghost Protocol showed anything, it's how gifted he is at constructing action when he's not also trying to deliver a message.

Now here we are with Incredibles 2, which picks up more or less where the original left off as the Parr family of superheroes—Bob/Mr. Incredible (Craig T. Nelson), Helen/Elastigirl (Holly Hunter), Violet (Sarah Vowell), Dash (Huck Milner) and baby Jack-Jack (Eli Fucile)—battle the Underminer. The ensuing damage reinforces the notion that "supers" are destructive and dangerous, but Winston Deavor (Bob Odenkirk) believes it's just a PR problem. Along with his tech-savvy sister Evelyn (Catherine Keener), Winston hires Helen to change the image of supers with some low-impact saving-the-day, leaving Bob the job of stay-at-home dad to the three kids.

The mostly split action between Elastigirl's crime-fighting missions and Bob's domestic challenges offers two distinct arenas for comedy and choreography, both of which offer plenty of delights. Bird makes magnificent use of Elastigirl's unique physicality as she tries to save a runaway monorail, her motorcycle dividing into segments connected by her elongated torso when necessary. Meanwhile, Bob faces his biggest challenge in dealing with Jack-Jack's newly manifested multiple powers, including the baby's decision to treat a raccoon as his arch-nemesis. The action sequences snap with Bird's mastery of geography, and his gift for finding a kind of majestic slapstick in characters bounding through dimensional portals or trying to slow down a speeding hydrofoil.

Yet there's also a level on which this feels like a lot of modern super-hero sequels, where the driving principle is often "do what the first one did, but more." So Incredibles 2 takes its returning elements like costume designer Edna Mode (Bird himself, still a scene-stealer), Violet's adolescent insecurities and Bob's frustrations with feeling unable to be his Mr. Incredible self, and adds several new supers to the mix. The climactic battle might be bigger than The Incredibles' showdown with the Omnidroid, but also busier in a way that doesn't allow for a clean, sharp focus on our heroes.

The "more" manifests itself even more in the ideas percolating throughout Incredibles 2, and there are plenty of them. On the one hand, Bird actually comes at his tendency to celebrate pure innate talent from a new angle, offering a suggestion that waiting for a hero to save the day diminishes us. The story's primary antagonist, The ScreenSlaver, also addresses a culture of passivity, while Bob's sub-plot takes on the changing gender roles of the story's 1960s setting. There's even a nod to the power of representation in heroes grateful for Elastigirl's work bringing supers out of the shadows. If you want to know what Incredibles 2 is "about," there's no one easy answer.

It feels hypocritical to knock a franchise movie for attempting to have a brain, when so many get knocked for never even trying. And maybe there's a little cognitive dissonance in a studio like Pixar that's so focused on heart going so much for the head instead. There's also a sense that Incredibles 2 is a manifestation of Dash's pure unfocused forward motion. Brad Bird delivers a whole lot of movie here, and a lot of that movie is great. That greatness generally shows itself when he's letting you experience his talents, and not so much when he's trying to make you think about them.