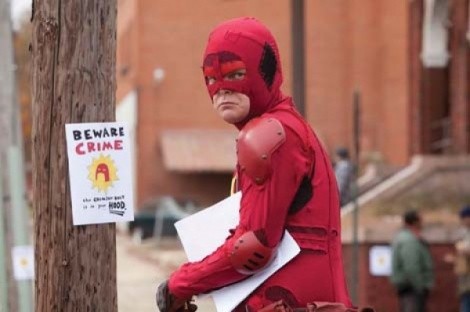 The idea of the painfully realistic superhero story—the sort of thing where a potential do-gooder realizes that donning a cape and tights is harder than it looks—has been around since well before Adam West first started mangling his syntax. While comic-book writers such as Alan Moore and Grant Morrison have made hay out of the hilarity and pathos inherent in the premise, the films attempting to do the same have generally been less successful—hands up, those of you who remember the 1980 John Ritter vehicle Hero at Large.

After Christopher Nolan started making utility belts cool again, the non-powered movement got a major boost with the release of 2010’s Kick-Ass. A few cool moments and Nicolas Cage aside, however, the film disappointingly never really did much with the idea of regular folks in spandex, switching quickly to a swaggering, hipper-than-thou example of the modern pre-ordained, Ain’t It Cool-approved cult film. It wanted to have its cake and chew it in front of you with its mouth open, too; the first issue of the current comic-book sequel contains a fight scene capped off with a Rhianna joke.

Anyway, enough: I come here not to bury that film, but to (mostly) praise Super, a sloppy, tonally inconsistent quasi-satire that nevertheless contains some surprisingly moving elements. Eschewing wirework and bullet-time in favor of painful contusions and awkward pauses, writer/director James Gunn’s film is a skillful, occasionally blackly hilarious deflation of superhero movies by someone who knows his way around the nooks and crannies of the genre. On another, more intriguing level, though, it’s about a mentally unstable guy who lurks behind Dumpsters and hits unsuspecting people in the face with a big wrench. This combination of Taxi Driver, religious satire and long underwear won’t appeal to all tastes, but that’s a good thing, really. Rather than trying to shoehorn in its fanboy fodder, it comes by its dark spots organically. Amid a glut of prepackaged, reflexively ironic black comedies, here’s one that actually still has some dangerous edges.

Beginning with a sweetly crude animation sequence during the opening credits, the story follows a devout, slightly dense short-order cook named Frank (Rainn Wilson) who flips his lid when his 12-step recovering wife (Liv Tyler) takes up with the local Big Bad (a joyfully skeezy Kevin Bacon). Following an anime-inspired message from God, he cobbles together a suit, adopts the secret identity known as The Crimson Bolt, and sets out to fight crime, picking up an overly caffeinated comic-book store employee (Ellen Page) as a sidekick in the process. Tall buildings do not get scaled.

Gunn packs his supporting cast with a number of B-movie mainstays, including Michael Rooker, Brian de Palma regular Gregg Henry, and Nathan Fillion in what may be the most ridiculous wig ever caught on celluloid. (Blink at the wrong time and you’ll miss former Greatest American Hero William Katt as a cop.) As for the chemistry between the leads, those fearing a reprise of the tooth-grindingly hip opening scene of Juno can rest easy. Here, Wilson adopts a poker-faced dimness that, while initially flat, pays dividends once his character begins having difficulties modulating his levels of justice between mobsters and jaywalkers.

The real standout, however, is Page, who ditches her traditional sardonic affect for a wide-eyed Red Bull clumsiness that’s mighty appealing, even when it occasionally bubbles over into psychosis. A scene depicting a late attempt at romance between her and the temporarily incapacitated main character attains a level of latex-clad awkwardness that might have even Lars von Trier taking notes.

Before going semi-mainstream with his script for the Dawn of the Dead remake and the clever, almost-a-parody Slither, Gunn first cut his eyeteeth at Troma, the cheerfully reprehensible exploitation studio that delivered such late ’80s VHS lulus as The Toxic Avenger, Class of Nuke ’em High and Surf Nazis Must Die. Even if the titles were generally—OK, almost always—better than the actual films, they carried a grotty, anarchic energy that distinguished them from Hollywood’s carefully sanitized, audience-tested attempts to get down and dirty. When it’s cooking, Super feels like a smarter descendant of those earlier grade-C classics, from a filmmaker fit and primed to carry the sticky grindhouse torch. That’s a compliment, honestly.