Brine Dance and RDT work together to give showcase opportunities to dancers and choreographers. 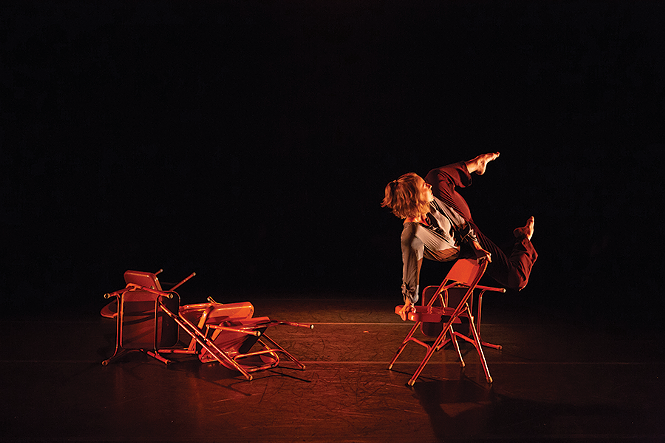 Like many young dancers, Lauren Broadbent began her artistic path before she'd even started kindergarten. At the age of 4, she was enrolled in dance classes. By the time she moved to Utah from New York City, at the beginning of high school, she was talented enough to immediately earn a spot on the Olympus High School dance team. She even represented her new school as the Sterling Scholar for dance.

No dancer thinks that it will be easy to establish a professional career, but Broadbent was dedicated and continued pursuing dance into college, declaring her major in modern dance at the University of Utah. Now entering her junior year, Broadbent will soon have to find a new way to sustain her passion—a tricky proposition with so few professional dance companies in the state.

But she might be set up better than most. Earlier this year, Broadbent—along with many other young up-and-coming dancers and choreographers—submitted a performance proposal to Brine Dance, vying to be one of the few chosen to participate in the collective's annual choreographer's showcase. She made the cut. This week, Broadbent, along with four other choreographers—Rebecca Aneloski, Daniel Do, Mar Undag, Trevor Wilde—present her original work at Brine-5, part of the Repertory Dance Theatre Link Series.

Brine Dance Collective came together in 2015 under the direction of Utah natives Symmer Andrews, Ashley Creek and Sara Pickett, who found themselves loosely connected through the local dance scene. Each woman was facing the same daunting reality that dancers like Broadbent still face today: Their professional careers would not likely include a spot in a company line-up, and had little other direction. Still, they wouldn't give up. With a dash of ingenuity and lots of self-determination, Andrews, Creek and Pickett decided to create their own opportunities for performance. Along the way, they'd also make space for their friends.

"We wanted to create space for artists to come together, make work and perform really professionally produced concerts," Creek says.

"We also knew that the venues we wanted, these professional stages, would be costly," Pickett adds. "That's when I spoke with Linda Smith [executive and artistic director of RDT]." Pickett had previously worked with RDT as a guest performer and as a teacher for the RDT adult school (she is also currently setting a piece on the company for their November concert). Through these connections, Pickett became familiar with the company's Link Series, a sponsorship series that supports local independent dance projects. Pickett and her Brine colleagues created a proposal and submitted it for funding. They were accepted and, since then, every Brine performance has been supported through the series.

That support means that Brine (and other small local companies and choreographers supported through the same fund) are able to benefit from discounted rental space. They can afford designers, videographers and costumer support. And, in the case of Brine, they can opt to put money toward hiring William Peterson, Ririe-Woodbury Dance Co.'s technical director and stage manager. Peterson brings to each of Brine's performances professional lighting design and stage direction. "William believes in our mission," Andrews explains, praising Peterson's contributions. "Working with Brine fuels his creative spirit, and in turn he brings professionalism to our show. He works closely with our choreographers and helps them in realizing their vision."

Getting professional guidance and mentorship from people like Peterson, Pickett, Andrews and Creek is a big part of what makes choreographing for Brine such an important experience for young would-be dance professionals like Broadbent. Through this last summer, she worked closely with her group of seven dancers. Expanding on a trio she had created for the University of Utah spring dancers' concert, Broadbent further developed her story, and movement, exploring ideas of trauma and loss.

"I wanted to get a lot done before Symmer, Sara and Ashley came to watch," Broadbent says. "I had a two-week intensive with the dancers, and then everyone came to observe and give feedback. Even after the changes I had already made, having other people looking at it helped me to see how I could better communicate my ideas. Not only was it helpful for this piece, but it will also be going forward and applying it to the next piece. I never want to choreograph without feedback."

In the last few weeks leading up to the show, this team of dancers, choreographers and directors has been putting in extra hours—on top of full time jobs—rehearsing, hanging lights and working on final sound design touches. It's all hands on deck to ensure that Brine 5 is a professional product in every way.