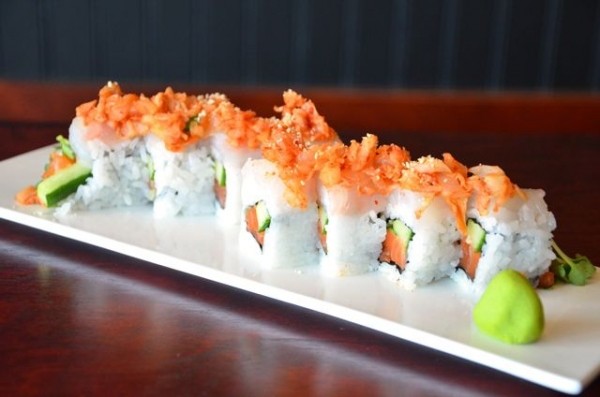 When Shakespeare came up with his “A rose, by any other name” line, he probably wasn’t looking at a menu. Words matter when it comes to food, triggering responses ranging from salivating to stomach-churning. Dishes named after celebrities take the taste-bud/moniker relationship to a whole new level.

Such was the case when we recently lunched at Sushi Blue, which opened in Park City over the summer. It’s the latest arrival in the stable of the Bill White Restaurant Group, and those who have already come to enjoy the likes of Chimayo, Grappa and Wahso will be impressed with the latest entry. Several of the Sushi Blue rolls are named after the famous—or infamous, as the case may be. One entry that caught our eye had a delectable-sounding spicy tuna combined with basil, red bell pepper and peanuts topped with hamachi, lime and Thai coconut curry—and the name Mike Thai Son. Naming a sushi roll after a guy whose most famous dining experience was munching on Evander Holyfield’s ear? To be fair, in both cases, the meat was served raw, but still.

There’s a long tradition of naming dishes after celebrities, most famously at the Stage Deli in Manhattan, which has been naming sandwiches after celebrities who dine there for 75 years. We’ve seen firsthand how names can affect what people order. We once had a dining companion boldly and loudly order the Mitt Romney burger at Mr. Bartley’s Gourmet Burgers in Cambridge, Mass. She insisted it was because she liked the combination of Swiss cheese and grilled onions, but we knew that she, as a staunch Mormon Republican, would never order the Barack Obama.

At Sushi Blue, we decided to take a chance on Iron Mike’s roll, and were rewarded with a knockout—pun intended—of spicy combined with crunchy. It was every bit as good as the Kimchi Kardashian.