Bouncing between these flavors can be quite a ride. 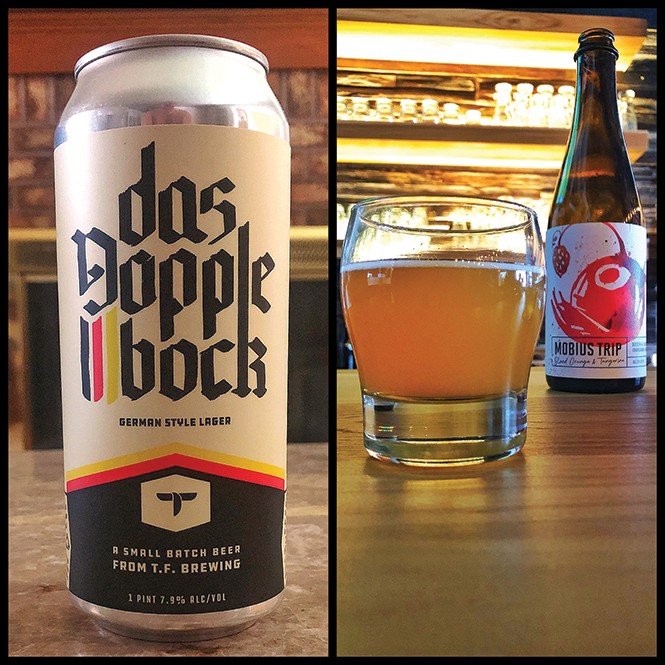 If you're interested in giving your taste buds a real workout, we've got a pair for you. Their sweet and sour contrasts of beers are so extreme, you'll be begging your palate's coach for another lap around the beer pool.

SaltFire Brewing Co. Mobius Trip: It poured mostly clear until the end of the bottle, mostly showing an amber-orange color with a very fizzy head that quickly faded to nothing. The aroma starts off with a slightly higher amount of medium sweetness, along with a funky yeast aroma; it's a little more straight funky than barnyard-like, and there's a hint of balsamic vinegar. Blood orange imparts a touch of citrus aroma. It mixes with the vinegar notes creating a dry and complex orange perfume.

The taste seems to be fairly similar to the aroma, and it starts off with a lighter amount of medium sweetness, with the tart base beer still being the first to show up. It's got a little bit of that same funk that I got in the aroma, but there's an herbal element present as well. Up next comes a higher dose of medium sourness that leads into the blood orange, which still imparts more citrus juice-like flavors, with a tangerine peel showing up a little more noticeably right in the finish. Throughout, this is a fairly dry beer that does its best to keep the tartness from the citrus additions from getting lost in the sour of the base beer.

Overall: This 8.0% ale is the first barrel-aged sour to come out of SaltFire, which seems to have tapped into a zippy flavor profile few local beers have attempted. Mobius Trip will feature various blends, and will undergo many incarnations as we get to know.

T.F. Brewing Das Doppelbock: The body has a dark amber-brown color with slightly lighter amber-red hues. Carbonation is visible through the mostly transparent body; a tall head of beige-colored foam creates a slightly frothy cap. Retention is average, lasting slightly more than a minute, and the foam leaves modest lacing on the sides of the glass in the form of a few scattered spots and lines. The aroma is toasted bread crusts and a bit of caramel malt, dried dates and figs—better than average, but not particularly expressive aside from the bread crust and caramel malt sweetness.

The flavor starts with toast and caramel malts that create a browned bread crust flavor. This would normally be too much for this style, if it weren't for the light caramel, dried date and dried fig flavors that immediately swell up from the rich malts. Mild German hops begin to emerge, adding herbal and bitter qualities that keep the lager from becoming too cloying and syrupy. There also seems to be a woodsy quality, though I might be imagining it. The hop herbal-woodsiness lingers in the background. In the end, toasted bread, caramel and nuts give way to a modest dose of Germanic-driven hops.

Overall: This 7.9% doppelbock is a well-made example of the style that shows lots of malts, but isn't overly sweet. It's a drinkable, enjoyable beer from T.F. Brewing that might be a nice change of pace from what is quickly becoming downtown's lager house.