Utah companies say they can’t control how their natural supplement products are marketed. 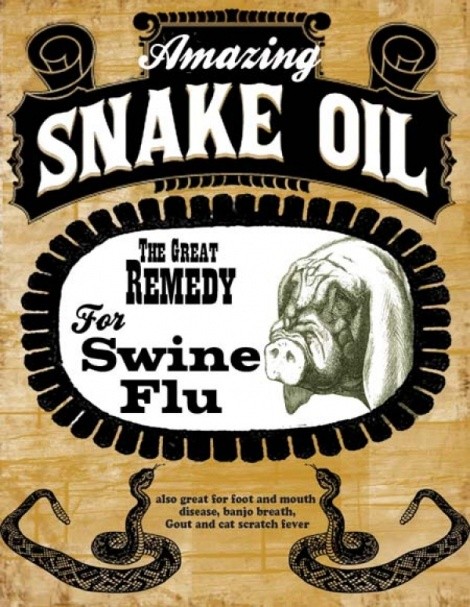 Swine flu has quickly gone from a note on the back pages to an all out panic in Utah. The disease has taken among its largest toll here, where at least eight people have died. But Utah also is the place where swine flu sufferers can find a cure, if the claims of alleged snake-oil salesmen are to be believed.

The Beehive State is the center of the world’s “dietary supplement” industry peddling lotions, capsules and juices with alleged health effects. Now distributors of some of those Utah products are touting them on the Internet as swine-flu cures, according to the federal Food & Drug Administration, which is trying to crack down on the fraud.

On June 15, the FDA released a list of more than 100 products allegedly marketed as cures or protections against the H1N1 virus. Among them a swine flu-preventing shampoo. The FDA has been monitoring such Internet claims since early May. Announcing the action, Margaret Hamburg, FDA food and drugs commissioner, warned of criminal charges against “those who attempt to take advantage of a public health emergency.”

The FDA did not allege that either Utah company was involved in improper marketing. The legal office of Nature’s Sunshine, in Provo, said the company was aware of the FDA action and referred City Weekly for comment to the company’s public relations department, which was not immediately available.

“There is nothing we can do about what our distributors say except to tell them to stop,” says Ned Jensen, founder and president of MBi Nutraceuticals in Lindon. Jensen was not aware of the FDA enforcement action, but said his company would contact the distributor allegedly making false claims. Jensen noted that MBi Nutraceuticals hasn’t itself made any claims for its supplements in relation to the swine flu and generally shies away from making any claims about its products.

Loren Israelsen, head of the United Natural Products Alliance, a Utah-based industry group, says such fraudulent claims hurt the industry, worth around $5 billion in Utah alone. The alliance responded to the FDA action with an announcement advising against using dietary supplements as a remedy for swine flu. The alliance issued a similar statement in 2003 when member company products were being flogged as cures for Severe Acute Respiratory Syndrome, that year’s pandemic virus.

“When we have exceptional circumstances, such as swine flu, restraint and discipline is called for,” Israelsen says. “We share the concern that consumers not be mislead or misguided. … At the same time, we want people to continue to use best practices to stay healthy and continue to use natural products for all the good reasons they do now.”

The FDA’s ability to regulate natural and homeopathic products is limited by a 1994 law written by Utah Sen. Orrin Hatch. The Dietary Supplement Health and Education Act says the agency can’t treat such products like drugs, which must be proven effective and safe. The law bars companies from claiming their products treat specific diseases but says the FDA can’t intervene in sales unless it can prove “a significant or unreasonable risk.”

Still, the FDA is increasingly using its power to stop the sale of products it believes are dangerous, such as in the recent recall of Zicam, a homeopathic nasal gel. Manufactured by a company that began life in Utah, Zicam was found to be causing people to lose their sense of smell.

Israelsen predicts increased FDA scrutiny will ultimately be good for the supplement industry. Bad press like the fraudulent swine flu marketing hurts everyone, he says. More regulation means more consumer confidence, and “as consumers have higher confidence, usage and sales will go up.”