At least Inferno brings some goofiness to its absurd plot. 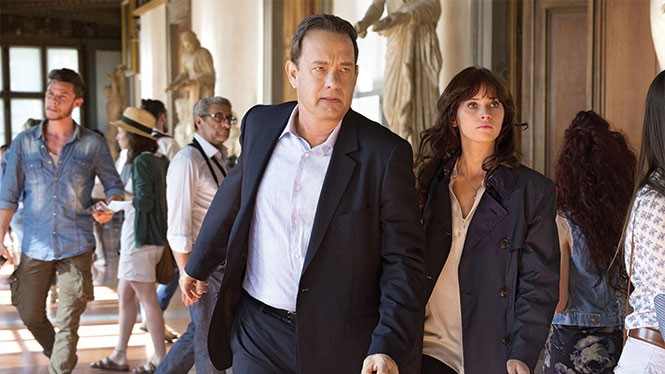 I'm not sure any of this Inferno movie makes sense, on any level whatsoever. And that's sayin' something, considering that this is based on a Dan Brown novel.

See, there's this tech billionaire, Bertrand Zobrist (Ben Foster), and instead of funding the eradication of all disease like Mark Zuckerberg, he spends his power and money on developing a virus that will wipe out half the human race before we get to a Soylent Green situation (overpopulation, resource depletion, eating the dead in cracker form, etc).

OK, but what does that have to do with "symbologist" Robert Langdon (Tom Hanks)? Funny you should ask: Langdon is having some weird and perhaps prophetic dreams about Dante's epic poem Inferno—that's the one with all the circles of Hell—and maybe Zobrist's virus is also called Inferno, but still, why would an art historian and runner-around of photogenic old European plazas and museums have any connection to a very 21st-century bioweapon?

Well, Langdon wakes up in Florence hospital with amnesia in his brain and a high-tech medical vial in his pocket. It has a biohazard warning symbol on it; could it be the virus? Also, some shady characters are trying to kill him for nefarious reasons, probably. So now he's on the run, with no memory of how he got into this mess, or even what kind of mess it is—he still knows who he is, and who Dante is, conveniently—with the help of a pretty doctor, Sienna Brooks (Felicity Jones).

If you're still not clear on why an academic like Langdon would be anywhere in the vicinity of an apocalyptic virus, wait till you get to the end of the movie and realize that there was no reason any of what we've seen had to happen. Inferno is sort of the cinematic equivalent of a moustache-twirling villain monologuing long enough so that the hero can save the day, when any decent villain who didn't actually want to get caught would have just pushed the big red button without sending out press releases in advance. On the other hand, while fans of the book will likely be disappointed to learn that the ending here is significantly different from that of the novel, the sense of "none of this needed to happen" that the book exudes remains intact. So there's that.

The first Robert Langdon flick, The Da Vinci Code, was dull; the second, Angels & Demons, was a grand intellectual adventure. Inferno exists in a muffled middle between them: completely absurd, ultimately pointless, but just about gloriously goofy enough to be momentarily diverting. It's a Nancy Drew mystery with Scooby-Doo overtones and a thin veneer of bookishness. Langdon himself is the puzzle this time, as he tries to regain his memory, figure out why he's being chased and by whom, and if he himself could be a carrier for that deadly virus (what is that suspicious rash?).

There are, of course, clues to be found—in paintings and fountains in the magnificent museums and stately churches of Florence, Venice and Istanbul. There are anagrams to be solved, and secret organizations to be uncovered. Museums will exhibit not only art and artifacts, but a convenient and shocking lack of adequate security as required by the plot. There will be much running, through secret passages under medieval buildings and across wide cobblestoned plazas (scattering pigeons). It's a more exciting Continental vacation than anyone who isn't "the world's most powerful mind" (as the trailer describes Langdon) ever gets to have. And if it actually gets some people interested in Dante's death mask and the Hagia Sophia, eh, there are worse fads a movie could produce.

The absolute best thing about Inferno, however—and this is simultaneously hilarious and also a supercool fantasy that we need to make happen—is that the World Health Organization's Mobile Response Unit, as depicted here, is like something outta the CIA or MI6, with all sleek black sedans and badass agents and soldiers. As if. Maybe some of what are sure to be the enormous profits from the movie could go to fund WHO to this level. Tough and intimidating kickers-of-disease-in-the-butt would be an amazing thing for such a silly movie to inspire.