Popular eatery caters to the masses in Morgan. 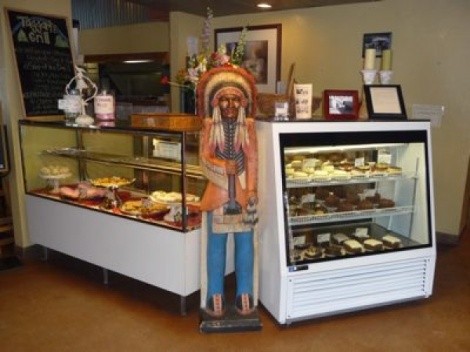 Unless you happen to cruise Weber Canyon on Interstate 84 near Morgan regularly, Taggart’s Grill is most certainly off the beaten path. The classic Morgan eatery isn’t technically even in Morgan, but past it, near Devil’s Slide. The restaurant has its own freeway exit; there’s nothing else really there. So, look for the exit sign that says “Taggart” and viola! you’ll find this historic restaurant, tucked away in a stand of trees just off the highway.

Despite the location—or, perhaps because of it—Taggart’s is wildly popular. Plan on waiting for a table; the restaurant doesn’t accept reservations, although insiders know to call a half-hour before they arrive. That won’t guarantee a table, but your name will be put on a priority waiting list, which in our case meant only a few minutes before a table opened, despite the crowd of people waiting outside.

Visit Internet review sites and you’ll find comments about Taggart’s saying things such as “Best restaurant in Utah!” or “The best food ever!” and “Definitely worth the drive!” I wish I agreed. Taggart’s Grill is the kind of place—a little piece of Americana—that I really want to love. But, I just don’t.

The décor and ambiance is rustic log cabin: Loads of wood, a stone hearth fireplace, peacocks strolling the grounds and an outdoor patio for dining al fresco. But, you can’t take kids onto the patio since they spill stuff and mess up the flooring, which means kids eat indoors and, thus, the restaurant is usually noisy. Servers seem rushed and frazzled, perhaps because of the typically big crowds. On a recent Friday evening—after our server took my wife’s dinner order and mine, but forgot the kids’—she said, “We’ve been slammed like this since we opened this morning!”

Specials at the restaurants come with a loaf of slightly sweet-tasting homemade bread—one of the best things about a meal there. They also come with a choice of soup or salad. Whatever you do, stay away from the clam chowder, which is the consistency of spackling compound. A better choice is the not-very-spicy “spicy” black-bean soup, which comes smothered with shredded cheese and blue corn tortilla chips. The red-chili poppers ($6.95) appetizer would be a good idea were they not stuffed with cream cheese. A better choice of starter would be the pita bread (made from scratch at the restaurant), served with a choice of pesto or marinara sauce for dipping ($5.95). My question is: Why not serve the pita with both sauces?

Burgers come on a choice of homemade bun or pita bread, and the special jalapeño burger is so popular the owner keeps threatening to put it on the regular menu. Overall, the cuisine here is classic American, with some tostadas and enchiladas thrown in. My teenage stepson loved the chicken enchilada ($10.95)—shredded chicken wrapped in a flour tortilla, topped with cheese, tomato, lettuce, black olives, a splotch of guacamole and cream sauce, with black beans and diced tomato on the side. I think I’d have been happier with that dish than my pot roast ($13.99) of shredded meat (chuck, I think) atop a gigantic mound of mashed spuds with baby carrots and brown gravy. My main complaint was that there just wasn’t much meat to be had, but plenty of potatoes and carrots. Overall, the dish was average, not “incredible,” as I’ve seen others describe it. Ditto the salmon steak ($16.99), which was predictably overcooked and topped with teriyaki-rum “marinade.” Alongside were undercooked au gratin potatoes and sautéed veggies.

The clientele at Taggart’s ranges from tourists passing by to local ranchers, and lots of families apparently not deterred by prices such as $2.29 Pepsis and $5.95 for a kid-size burger. There were real cowboys at the table next to us and only one other party who I could see drinking wine. I was happily surprised, frankly, that Taggart’s even served wine; I hadn’t expected it. And, I was even more surprised to find—on the very skimpy wine list—one very good California Chardonnay: Morgan ($46). How did this ever get on the wine list? I wondered. And then it dawned on me: Morgan —as in, Morgan, Utah. Well, the wine came to the table at almost room temperature, but with frosted wine glasses—a wine-service spin I’ve not encountered before.

Desserts would seem to be a main attraction. There are two dessert cases featured prominently at Taggart’s entrance, next to a wooden Indian, where kids can’t miss ’em. They vary daily, but you can usually find brownies, carrot cake, pink sugar cookies, cheesecake, chocolate cake and lots more, all made in-house from scratch, daily. We opted for the flourless chocolate mousse cake ($5.50) which had, unfortunately, a slightly off taste—as though it had been sitting out near the stewing pot roast or something. Oh, well.

I didn’t come to Taggart’s Grill looking for anything exotic—not even for modern American cuisine. I came looking for classic American comfort food and was disappointed. And that’s a shame, since there are a lot of things about this unique roadside eatery to love. I just wish the food were one of them.%uFFFD