Exotic dancing can be a grind 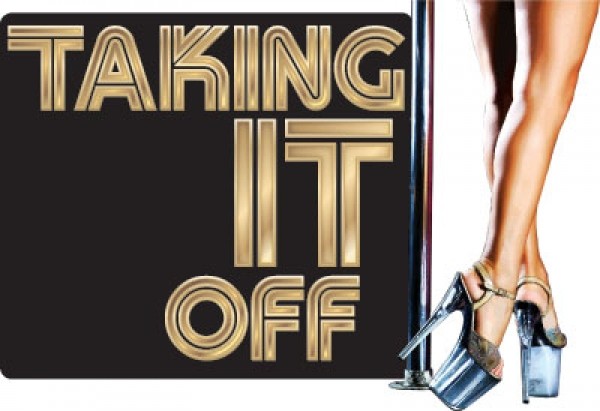 “No one says, ‘I can’t wait to be a stripper,’ ” says Anne Yeargin about her identical twin, Amy Freeman.

Freeman was at a low point in her life in January 1999—not because of what she would be doing, but because of what drove her there. “I was very helpless,” she says. “My girls were suffering, and I couldn’t get any child support—even after I sent the state after my ex-husband.”

Freeman felt that in her financial bind, she could depend on no one. When she ultimately called a strip club for a job, she was told to bring in a bikini so she could audition. The 27-year-old entered what was then The Million Dollar Saloon (now the Southern X-Posure club at 3420 S. State) shaking with nervousness.

She literally trembled as the music started. When she was asked to take off her top, “the modesty issue was kind of freaking me out, but I’d already developed the ability to shut down in my marriage.”

From the moment her bikini top dropped away, Amy became Sapphire, an exotic dancer named after her birthstone. “I’m a pretty shy person—the last person you would ever think would have the guts to do this. I just created an alter ego and was somebody else onstage. I was terrified the first day, but after a while, it got really easy. Dancing was exciting and exhilarating for Sapphire.”

Long, Hard Road
Before she learned to take it all off, Amy Freeman had worked as a Continental Airlines reservationist, where she got travel perks—but low pay. Working as a licensed massage therapist for a chiropractor also didn’t provide a living wage. Even with multiple jobs, she didn’t pull in enough to support her two daughters. Her former husband was still in the picture but often quit working and stopped sending child support. 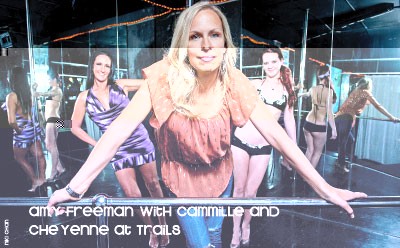 Oddly enough, Freeman’s lifelong dream was to become a professional dancer— a ballerina. She was on her way to meeting her goal when she got pregnant at 18. “I still tried to pursue it, and took the girls to class with me. I really tried, but it was too demanding. I realized this was no way to raise two young children.”

She got to the point where she wasn’t making any money and was desperate. Sitting on her bedroom floor one day, sobbing, she decided to try working as an exotic dancer. “It was a long, hard road for her,” says her sister Yeargin.

The three clubs where she eventually worked had opulent names: The Million Dollar Saloon, The Golden Fleece and the Gold Bar Saloon (now known, respectively, as Southern X-posure on State Street and Duces Wild on 300 West. The Gold Bar Saloon on 3300 South has closed). Arriving for her first shift from 11 a.m. to 6 p.m., Freeman soon learned the routine of donning a g-string, using a glue stick to attach pasties to her nipples (she would remove them later with a baby wipe) and adding stiletto heels before heading out to dance on five different stages. A bouncer escorted her between the stages. After the fifth dance, she went backstage to put on a dress and re-emerge to mingle with men in the main club area.

She’d heard about dancers in Las Vegas beginning their evenings with a couple of drinks to loosen up and summon courage, but such imbibing isn’t legal in Utah. “If they were high or something,” she says, “they did it before they came into the club. It was never an issue for me; I’ve never been a big partier.”

She utilized her talent as a longtime dancer and never needed to take pole-dancing lessons. “I just watched, and it sort of came naturally. A lot of girls could do amazing tricks on the pole. I could spin around, but I just taught myself.”

Master of Drink Tickets
Freeman discovered she had a knack for letting men talk about themselves and making them feel important. She recalls a broad spectrum of men who worked on oil rigs, drove trucks and owned their own businesses. Occasionally, there was a bachelor party. Her sister Yeargin might stop in to say hello but, mostly, she remembers a lot of solitary men who seemed lonely, were extremely quiet and just sat there. “One guy who appeared to be totally unemotional suddenly handed out a huge chunk of money that seemed to come out of nowhere,” Yeargin recalls. And a man with a foot fetish threw money at Freeman whenever her toes were painted perfectly.

Yeargin saw a man she knew from the business world who jokingly—but seriously—admonished her not to spread it around: “Don’t say anything.” Yeargin saw a wide range of people “who I wouldn’t guess that’s what their habits are.” 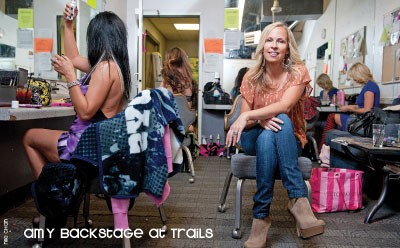 There is a wide age range among dancers, too, from the 18-year-olds allowed to dance fully nude at the alcohol-free American Bush to a 50-ish woman with the stage name of Jasmine who could still do the splits.

Dancing is similar to waitressing, Freeman says, in that each dancer receives a small paycheck—like a food server—and that tips received are an important aspect of being paid. The dancer, in effect, rents out her time when she dances on the stage and receives tips. Her dances are followed up with subsequent mingling with the customers, who buy her drinks as a way of paying for her stage time that night. Two types of drinks are available at the club: traditional drinks purchased from the bar and nonalcoholic “dancer drinks” that cost $5 each.

At the end of the night, each dancer has to turn in five drink tickets, or pay $25. “Every time they would buy you a drink, you would get a drink ticket. I would sit down with a man, order a drink, excuse myself briefly, saying ‘Just a minute,’ then go sit with another guy. I was a master at getting drink tickets. Whenever somebody came up short, I gave them away.”

Freeman usually worked Thursday through Saturday nights, bringing home anywhere from $50 to $400 a night. “A lot of girls go down to Vegas where you can make more money,” she says. "You can touch the men and climb on them." Dancers also drive to Wyoming to make more money because  lap dances are allowed in bars where alcohol is served—not so in Utah. Also, oil-field workers there are known to leave big tips.

“I know that some men will pay $1,000 for a private dance,” when a patron pays to have time alone with a dancer at a private stage where only he can sit. “There are golf tournaments where they pay girls hundreds of dollars. It is quick, easy money.”