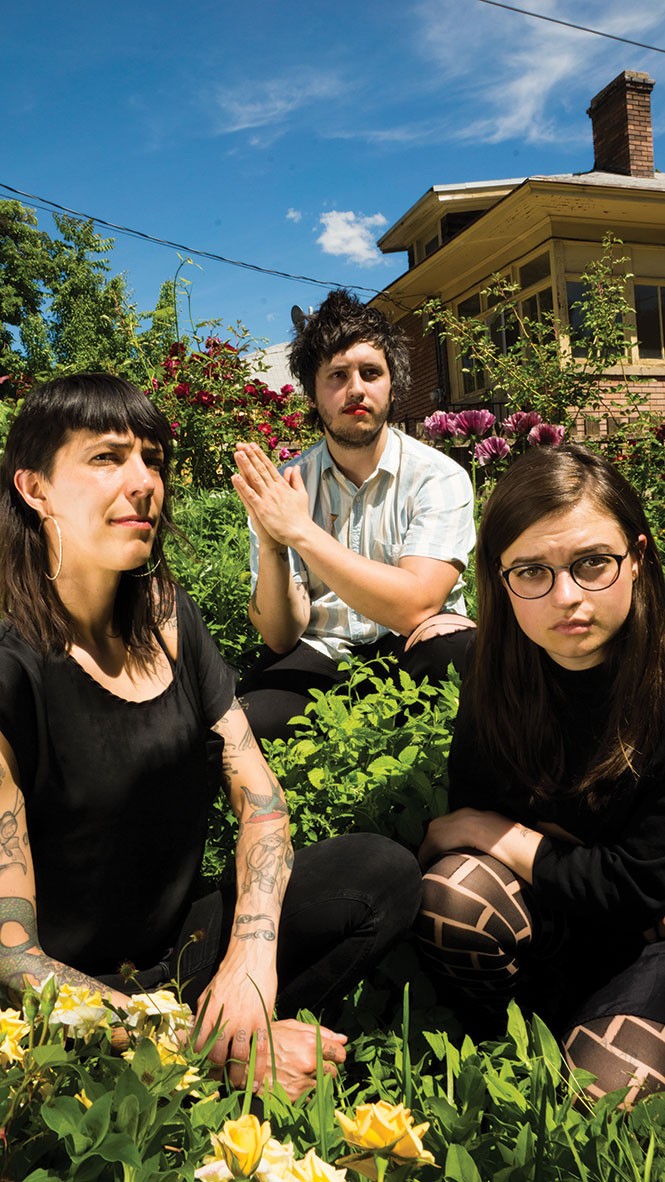 There's a point for every band where you have to make a decision about the future of the group: Stay the same and become stagnant, or adapt and survive. For Salt Lake City trio JAWWZZ!!, that moment happened last spring, when they became Sculpture Club, releasing a new album to mark the occasion.

The band originally formed in 2011, when singer/guitarist Chaz Costello and drummer Madison Donnelly wanted to make more music and tour more frequently than they were doing in their other band, Broken Spells. The two took influences from acts like The Chameleons, The Smiths, Nü Sensae, The Raincoats and Xiu Xiu to create the new-wave post-punk sound they have today. They launched JAWWZZ!! as a duo, put together a list of 10 songs (most of which were released on their debut album, CHUMMZZ) and hit the road during 2012.

The group got a lot of early buzz and became an intricate part of SLC's indie punk scene, capitalizing on it by releasing the Party Problems EP in July 2013. Their live sets became the talk of the city—particularly the ones at record stores and private homes, where the band implemented visual effects like CO2-propelled confetti cannons, laser lights, fog machines, piñatas, streamers and glitter.

Shortly after their EP dropped, the band brought in Chris Copelin on bass in order to push both their songwriting and sound in new directions. "I was a pretty big Broken Spells fan, and had actually seen that band play a lot more than I had seen JAWWZZ!!," Copelin says in an email interview. "But I was really impressed with both Madison and Chaz's musical inclinations and stage presence, and was truly flattered when they asked me to potentially join their band."

The band continued to play as JAWWZZ!! until shortly after the 2016 Treefort Festival, when Donnelly brought up the idea of changing names. It turned out that Costello and Copelin had also been mulling it over, stemming from a point in 2014 when their newer music didn't feel like it fit the old name. In May, they decided to release their newly recorded album A Place to Stand as Sculpture Club—and retire the band name with a festive JAWWZZ!! funeral at Diabolical Records.

The album itself demonstrates amazing growth, in both sound and lyrics. When sequencing the album, the band discovered a loose, accidental concept that "kinda tell a story of my mental state over the last five years," Costello says. His vocals are haunting, almost Robert Smith-like in their delivery, pouring into the microphone like a fountain of verbal riches. Songs like "Blooming" and "It Doesn't Get Better" show off his emotional range, shifting demands to pleas in a heartbeat. Copelin and Donnelly interact well, standing out when needed but always in tandem, shining on songs like "Lovely Lashes" and "My Favorite." A Place to Stand proves a punk band can be much more than loud, and new wave can be powerful instead of quirky or mopey.

While the band prepares for a short statewide tour, many of their other projects (Big Baby, Choir Boy, Human Leather and Fossil Arms) are finishing albums—all due for release this year. And although Donnelly will take a six-month break for school this fall (with Jacob Hall filling in for her during that time), she says the band is ready to "commit super-hard" when she returns in February. "We are talking about touring again in the spring, and releasing a seven-inch ... Also, this is the funnest band I'll ever be in, with the best band dynamic, so I have to bask in it while it lasts."

Does that mean they'll be keeping the cannons and papier-maché candy delivery vessels? So far, they haven't discussed it but, "I think we probably will [keep them]," Donnelly says. "I think the 'dance party to keep from crying' concept is very close to our band, and the piñatas and confetti add to that."