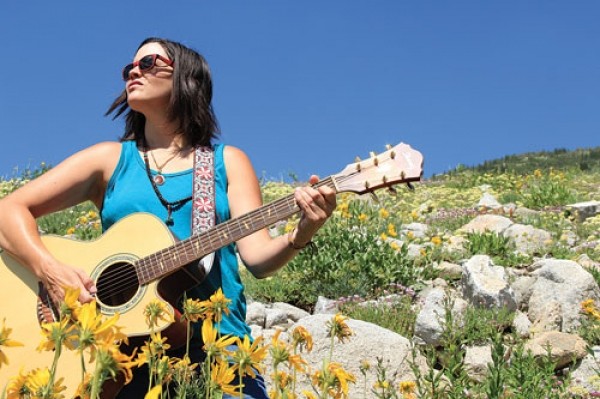 Finding a voice wasn’t necessarily easy for Talia Keys even though she can now own just about any stage with her truth-telling lyrics and bold onstage banter. “Growing up, I was a pretty shy kid,” says the Salt Lake City native, who’s the frontwoman of two local rock bands and is also a burgeoning solo artist. “I was a tomboy, and people would like to call me ‘that little lesbian,’ and I harbored almost a kind of a hatred of myself.”

In her “intensely personal” first solo EP, Gemini Mind, Keys reveals her journey to becoming the brazen, free-spoken musician she is today. The new six-track EP includes original songs recorded with both of her bands—Marinade and Lady Legs—and two solo songs, and highlights the life-changing experiences that shaped her. “It’s weird the way the whole album fell chronologically into place; it’s a sort of a semi-life-story for me,” says Keys, who leaves for a summer solo tour soon after her album-release show.

Gemini Mind delves into several personal subjects, and that level of self-exposure is new for Keys. In the four-plus years she performed with her first band, the “saucy” funk-rock outfit Marinade, she says, she had a different stage persona from the more authentic one she sees herself evolving into now. “I’ve been pretty crass to get people’s attention, in a way,” Keys says. “I see why I did it back then: because I was afraid of what people would think of this girl and her baseball hat playing drums and singing songs.”

Nowadays, Keys, a full-time musician playing up to four nights a week both solo (as Gemini Mind) and with her new soulful, bluesy rock band Lady Legs, fearlessly gives voice to her truth. “I’ve been more passionate about talking about human rights, and about things like the tar-sands project and oil companies and the government—being crass and in your face about those things, as opposed to making jokes or being sexual to get people’s attention,” she says. “I’m finally not afraid to do that, but it took some time.”

Keys is similarly honest in the songs on Gemini Mind. In the song “In My Beer”—one of the two solo tracks for which she recorded all the instrumentation and vocals on her own—is “a kind of love song about drowning yourself in your beer and smoke and whatnot, something I definitely had a problem with at one point,” Keys says.

Following that darker period of excess came two years of sobriety, a time of self-discovery that Keys describes as “when the sun came out” and that is the subject of the song “Face in the Clouds,” about stopping running and turning around to face yourself. “I thought, ‘Why am I so afraid? So what if I could be into women, what’s wrong with that?’ ” she says. “I became more independent and confident, and the frontwoman I am today. And that’s when I met the love of my life, Melahn.”

In summer 2013, Keys went back to the diabetes camp she often attended as a teen, the place she first performed music and discovered she had a voice onstage. She opened up to the youth about her self-hatred in high school, how fat and ugly she felt, and where she is today. And she performed “Me”—one of her first deeply personal songs about “being yourself.”

“Kids were in tears, and a girl came up to me after and told me how that song changed a lot of things for her,” Keys says. “And it made me realize I am doing more than just party music now.”

And she’s determined to always speak her mind. “Sometimes people say things like, ‘I wish that girl would just shut up and sing,’ ” Keys says. “But I’m not gonna let those things get to me; I’m still gonna do what I’m gonna do.”