Radio host, author on being LDS, black and happy 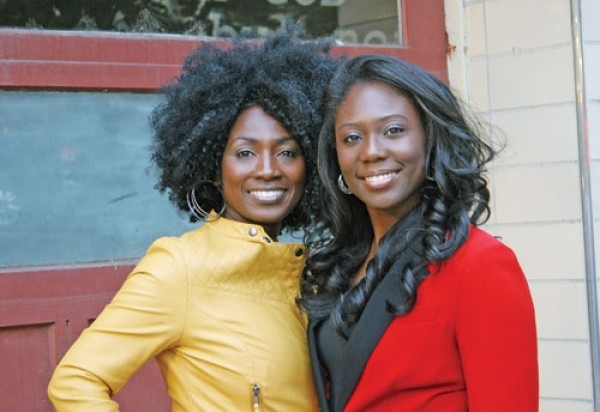 Tamu Smith and Zandra Vranes, two black Mormon women living in “Zion” (Utah), are radio hosts and authors of the new book Diary of Two Mad Black Mormons (SistasInZion.com). The book, composed of diary entries from both Vranes and Smith, is a humorous take on finding the Lord’s lessons in everyday life and attaining balance between culture and their religion. Smith, who was born in Southern California and joined The Church of Jesus Christ of Latter-day Saints as an adolescent, talked with City Weekly about their book and message.

What made you two decide to write Diary of Two Mad Black Mormons?
We felt that our voice had been, to some extent, underrepresented. When you think of what a Latter-day Saint is or what a Mormon person is, you have an image of the Osmond family or two white guys on bicycles. We have something to add to the conversation, and thankfully, Deseret Book agreed.

People think faith is not fun. It is, it’s a lot of fun. It’s a very important part of people’s lives, so why can’t we have fun, why can’t we laugh, why can’t we smile? Our book is actually humorous, and that’s how we get though the hard things in life, with humor. We feel that whether you are a religious person or a spiritual person or anyone who feels disenfranchised, you have something to relate to in this book. You don’t have to be black and you certainly don’t have to be black and mad. It is not for anyone who is mad and wants to stay mad. If you want to stay mad we are probably not the people for you. If you hang out with us long enough, you’re going to find some sort of happy.

How did you attain balance between your culture and religion?
It is important to stay connected to information that is passed on at black churches and other social groups that we wouldn’t get at our church, that wouldn’t necessarily be important to our bishop. We stay connected to the black community that is not LDS. Sometimes, especially when people come from other countries, there is a feeling that you have to give up that culture for Mormon culture, but we think that they really go hand in hand.

Who do you get more backlash from—Mormons or non-Mormons?
Mormons. People have asked us, “Why do you have to be mad black Mormons, why can’t you be mad Mormons?” and I just have to say, “Did you hear that? They don’t want us to be black.” People don’t like that we refer to ourselves as “Sistas.” They feel we are distinctly making a separation because of color. We’re saying “Sista” as a term of endearment. Mormon culture has a tendency to want their members to assimilate. We want to be able to spot a Mormon very easily. If they could opt for uniforms, I think they would. For some LDS people, we are unsettling, because they can’t spot us; they don’t understand who we are right off the bat. What is crazy is that sometimes Mormons don’t get our title. Some people don’t even know who Tyler Perry is, which is crazy. They don’t even know that our title is a play off of Diary of a Mad Black Woman. So that reference is gone. Non-Mormons think we’re mad crazy because we’re black and Mormon.

How did you attain balance between your culture and religion?
One of the ways is through Genesis group. They were people who were culturally just like we were, black and living in America, and had similar cultural backgrounds as us and they also shared our religious experience. Genesis was a way to blend culture and religion. It is also important to stay connected to information that is passed on at black churches and other social groups that we wouldn’t get at our church, that wouldn’t necessarily be important to our bishop. We stay connected to the black community that is not LDS. Sometimes, especially when people come from other countries, there is a feeling that you have to give up that culture for Mormon culture, but we think that they really go hand in hand.

How do you handle angry callers on your radio show?
Hit the mute button. We’ve had very inappropriate sexual callers, we’ve been cussed out, and we’ve been called the n-word. This is the life of a black American, whether we’re talking about faith or not. I wish it wasn’t so, but that’s something I learned how to handle that a long time ago. They can try if they want to but they will get muted and hung up on so fast.

How have your lives changed since releasing your views to a larger audience?
Now our neighbors and friends and people in wards know that sometimes we steal and sometimes we lie. They know our business. We quit our jobs to write this book, and when we put our two weeks in, it was a big Mormon coming out party, everyone found out I’m one of them.