Tanner Dance kicks off a 70th anniversary celebration of its influential program. 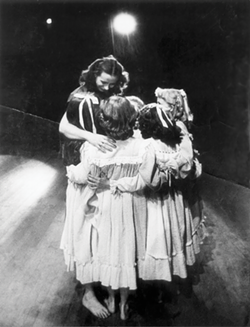 A group of 40 young children, dressed in simple tunics, peek out from behind the black curtains lining the wings of the Kingsbury Hall stage. The excited energy of the young bodies is palpable. When the music begins, they take to the stage dancing to poetic verses by Ernest Bloch. Their movements are swooping and graceful.

The year is 1949 and, though this is Salt Lake City, and though these modern dancers are children, the world is watching. Doris Humphrey is a guest of honor at this inaugural performance of the Children's Dance Theater (CDT). Dance Magazine publishes an article about the event. Four years later, the children, led by their teacher Virginia Tanner, perform at the renowned Jacob's Pillow dance festival in Massachusetts and at the American Dance Festival in Connecticut.

Critics applaud the children's troupe. The dancers are featured in Life and Newsweek and on national television. Walter Terry, in his review of the Jacob's Pillow performance for the New York Herald Tribune, writes, "Other children have danced such themes ... but none, I think, have conveyed so perfectly the bright (not pallid) purity of child-dance. It is difficult to describe even the most potent intangibles and the best I can do is to say that the children danced as if they had faith in themselves, had love for those of us who were seeing them."

While Tanner Dance and the Children's Dance Theater might no longer excite the same national attention that it did at the start of Tanner's career, the work she began continues to grow in importance within our local community. As they head toward the 70th anniversary of their ground-breaking debut, Tanner Dance invites the community to join in a year-long celebration of the life and work of Miss Virginia (as she was known affectionately), and who passed away in 1979. Kicking off festivities are two screenings of the Tanner Dance documentary Building Center, this weekend; later events will include a speaker series and the annual CDT spring performance at Capitol Theater.

"It's amazing to look at the breadth of Tanner Dance programming and consider just how much it has grown from the seeds of dance and that initial performance in 1949," says Tanner Dance artistic director Mary Ann Lee. These days, the umbrella of Tanner Dance spreads far across the community. According to Lee, the organization serves nearly 5,000 children each week. In addition to the performing group, CDT, Tanner Dance leads arts in education and Dancers With Disabilities classes, the Tanner Fine Arts preschool and other programs. And it all started with a young Salt Lake City girl who preferred dancing on her front lawn in black bloomers to standing at a barre in ballet class.

Virginia Tanner, born on April 25, 1915, always had a natural attraction to movement. Her connection to some of modern dance's greatest choreographers, however, began when she left home at the age of 18. While working as a governess in Washington, D.C., Tanner began attending evening dance classes with Evelyn Davis, a contemporary of Martha Graham and Doris Humphrey. Though Tanner moved back home two years later, she continued studying dance during summer programs in Colorado, including at the Perrty-Mansfield summer dance program in Steamboat Springs where Humphrey taught. Tanner became an important student of Humphrey's, and was eventually persuaded to move to New York where Tanner continued studying at the Humphrey-Weidman studio, performing Humphrey's work and taking over many of Humphrey and Charles Weidman's teaching appointments at a number of universities and schools.

But the struggling life of a professional dancer was not the path for Virginia Tanner. After a two-year stay in New York, Tanner returned home. She reentered the education program at the University of Utah and in the fall of 1940 at the age of 25 completed her undergraduate degree. During the next decade, Tanner directed the dance department of the McCune School of Music and Art in Salt Lake City and, by the end of the decade, she staged that first Children's Dance Theater performance that captured the nation's attention.

Tanner's gift, explains Ann Dils, a teacher of dance history at the University of North Carolina-Greensboro, was her unique ability to see children's need and ability for creative expression. "Tanner did not disentangle the education of young people from the training of dancers," writes Dils in Dance With Us: Virginia Tanner, Mormonism, and Humphrey's Utah Legacy. "Dancing was a means of belonging, of learning to cooperate, of giving to community. Being a Tanner dancer gave children a valued place in the Salt Lake City community, but it also set them apart and connected them to a world beyond the boundaries of home and hometown."

Lee, who as a youngster trained with Miss Virginia, couldn't agree more. "I think that dance allows children to find their voice in so many ways," she says. "It becomes a channel to see the world in a new way and make the world your own, to live your life in an alive and curious way."