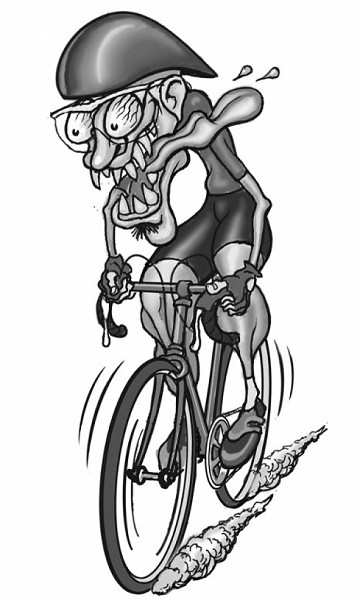 One of the pleasures of walking my dog along Wasatch Drive, just above the mortuary, is imagining the mayhem that would result from a motor vehicle scattering the colorfully clad spandex bicyclists, shouting inanities at the top of their lungs, who routinely breeze through stop signs posted at every cross street.

I couldn’t predict when such a splashy Technicolor scene would present itself to me, but I knew it would happen sooner or later. Now, after actions taken by our dedicated public servants up on Capitol Hill, I know the spandex-and-metal mayhem could occur at any moment; maybe this evening, if I’m lucky.

(Some hopeful people—probably liberals who believe in evolution—hold on to the belief that, over time, our legislators will become less stupid; they are apparently unaware of the longtime mission statement of the Utah Legislature: “Stupid? You betcha! Every day in every way we is getting stupider and stupider.”)

To recap the events that have ensured imminent mayhem up on Wasatch Drive, or coming soon to a neighborhood near you: No. 1, the bill (HB91) introduced by Rep. Carol Spackman Moss (or is it Moss Spackman?), D-Holladay, that would exempt bicyclists from obeying stop signs. No. 2, the remarks by Scouting enthusiast John Valentine regarding a bill (SB113) forbidding minors from driving and cell phoning.

The bill sponsored by Ms. Spackman Moss would make legal what is already a universally illegal practice; to wit, spandex cyclists ignoring the most basic rule of the road, i.e., coming to a stop when a red octagonal sign with the word STOP whitely painted upon it comes into view. According to one of the bill’s cycling supporters, Rep. Don Ipson, R-St. George (intimate friends say he likes to lounge around the house in his cycling spandex), it is difficult, yea, dangerous, to stop his bicycle at a stop sign. Not only is it very hard to get his surprisingly small feet out of his pedal clips, but nigh impossible to prevent his body from falling onto the pavement.

“If I don’t keep moving,” joked the spandex enthusiast, “I tip over.” (Apparently, when the jocular St. George legislator finds it necessary to stop in circumstances other than stop-sign situations, he looks for a convenient bush to propel himself into.)

What is it about spandex-cycling fanatics? Whence comes the paranoia (every one hates us!) and associated sense of entitlement?

When they don their splashy yellow and red and green Tour de France outfits, they undergo a profound and scary transformation. Maybe they actually think their spandexed derrieres have been teleported to the hills of Normandy or the outskirts of Paris, and imagine they hear the encouraging roar of goose-necking and frog-eating Frenchmen as they pedal toward the finish line.

A noted scientist I talked to recently has another theory: He has laboratory data conclusively proving that the form-fitting spandex suppresses capillary action in the epidermal fornix, especially in the groin region, which, in turn, activates specialized enzymes that stimulate the pancreatic islets of Langerhans, resulting in dangerous levels of polypeptides in the hippocampus. Cyclists soon start speaking in a slight French accent and are flooded with a feeling that they are lords and ladies of the highways and byways.

On that other front, the bill banning teens from cell phoning in their motor vehicles (probably the only humans, given their youthful reflexes, who, in a pinch, could pull it off) is a small step out of legislative stupidity, but it doesn’t go far enough.

No one should be allowed to drive and phone, least of all doddering senior citizens like Sen. John Valentine, the Scouting Republican from Orem. Although he admits that he finds himself “drifting lanes, trying to dial a number or trying to look up a number” (barreling up Interstate 15, presumably), he nevertheless opposes the bill on grounds that safety takes a back seat to “the freedoms that we lose all the time up here” from such legislation. [As quoted on KCPW, Feb. 26.] A warning to Utah drivers: If you see a geezer in a Boy Scout hat fumbling with his cell phone, give him a wide berth. He is just exercising his freedoms.

But somewhere down the road, he will fumble with his phone long enough to take his eyes off the road and plow into cyclist Carol Moss Spackman, or Spackman Moss, who is likewise exercising her freedoms to wear spandex as she breezes through a stop sign.