What to do with Utah’s superfluous menfolk. 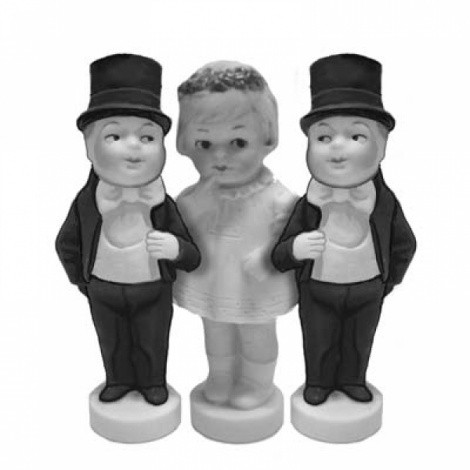 The first signs that something was wrong in the state of Utah were scattered reports of males barging into female restrooms. Experts, asserting the right of hindsight, say there were earlier indications that men were availing themselves of the inviolable female bastion: toilet seats in the upright position, sticky stains on white porcelain, mysterious puddles on the tile floor.

What was going on? Was the phenomenon just another skirmish in the eternal battle of the sexes? Had there been an increase in dyslexia, always a predominantly male affliction, which resulted in the perceptual glitch of turning a W into an M?

Only last week did the answer come in on the subject of lavatory violations. It turns out that Utah has the fourth highest ratio of men to women in these United States, according to the Census Bureau: 50.5 percent men, 48 percent women, and 2.5 percent other. (A big surprise was that Beaver County had the fewest females.) Of course, men being the expendable sex, nature has been more prodigal in the production of males, their statistical advantage diminishing with age as men outdo women in the death department, succumbing as quickly as possible to hunting accidents, heart attacks and a variety of stupid accidents.

Governor Huntsman took time out from packing for China to appoint a task force on the situation. An unreliable source in the governor’s office has supplied the Deep End with a preliminary top-secret memo:

Memo: An Inquiry Into the Surplus Male Situation, or Utah Men No Longer the Jolliest That You Have Ever Seen.

Cause: Four possible causes have been suggested: increased motility of male homunculi, insufficient secretion of the gynodynamic hormone in the guadocanal, idiopathic segmentation of the Mason-Dixon gene, or numerationally challenged census takers.

Symptoms: For a long time, observers have witnessed an increase in crossdressing of Utah males, and not just on Halloween. Researchers speculate that the Maxwell-Fickinger Gender Equilibrium might be manifesting itself in the general population, as the two sexes seek to selforganize into equal numbers.

Exacerbations: The male surplus situation is made worse by the lesbian craze sweeping the nation. Once just a widely disputed hypothesis, the lesbian craze is now accepted as scientific fact, largely due to an Oprah show on the subject.

Benefits: An overwhelming number of women have expressed relief at no longer having to wait in interminable restroom lines at theater and sports events, except, of course, at those venues where prostate-impaired men crash the female facilities.

Solutions: Solutions to the surplus male situation fall into three broad categories: Social, surgical and marital. Social solutions involve some form of redistribution, such as exporting (or “donating,” which is the preferred expression) excess males to other states or countries.

Said one potential transsexual, “Hey, if it meant I could take showers with females, I’d do it at the drop of a hat. But marry some guy? No way, Jose.”

Perhaps the best solution is the marital one. Utah already has a long tradition of plural marriage, and the only difference now would be a plurality of husbands instead of wives. This is known as polyandry. Random polling has indicated that many women would look at polyandry in a positive light. A typical response was, “I don’t care what Dr. Laura says, one husband is not enough. I’m just getting started when George peters out. I like the idea of a fresh player from the bench.”

The task force refused to consider gay marriage, on the grounds that it was totally against nature.