The siren song of PACs will try to lure the citizens' candidate. 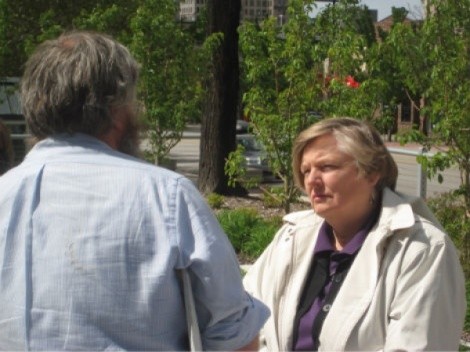 On a cold spring morning on the plaza of the Wallace F. Bennett Federal Building in downtown Salt Lake City, 20 or so people stand in small groups, earnestly debating issues like health-care reform and bank regulations. Unlike at many political rallies, people develop their points with lengthy expositions instead of half-sentence sound bites, and listeners allow speakers to conclude before launching into a rebuttal.

Among those engaged in a small group is Claudia Wright, the upstart “citizens’ candidate” who has found herself in a primary with Rep. Jim Matheson, D-Utah for the state’s 2nd Congressional District. Yet, two weeks after the Utah Democratic Convention, Wright is still campaigning one person at a time, at rallies like the Coffee Party gathering at the federal building May 22.

Wright remains the grassroots candidate, especially financially. When asked how the fundraising has gone since the convention—when she had raised slightly more than $8,000—she says they’ve almost doubled their money, having topped $15,000 in donations. Matheson, however, has $1.4 million in the bank.

Wright is getting attention nationally, and has received the endorsement of the Blue America political action committee, an arm of the ActBlue fundraising machine that is focused on taking down moderate Blue Dogs such as Matheson in the U.S. House. Blue America has more than $100,000 in cash on hand, while ActBlue has raised more than $30 million for candidates in the 2010 election.

Other interested groups include Planned Parenthood’s PAC and unions, which are angry with the approximately three-dozen Democrats—again, mostly Blue Dogs such as Matheson—who did not support health-care reform.

That national attention, however, will also bring greater temptation to Wright’s campaign. As the "citizens’ candidate," she is running under the banner of a group started by an ad, placed by environmental activist Tim DeChristopher, seeking a representative who would not be beholden to corporate donors and special interests. Yet by their very nature, PACs are special interests, and often provide a front for corporations.

Wright says that she will only accept money from PACs whose positions she already shares. She plans to examine PAC contributors to make sure they are not a front for corporate money and that she supports their causes. The Blue America PAC receives money from individuals across the country who support election reform and the health-care legislation, as opposed to major corporations. Wright says that she will accept Blue America’s money also because one of its key issues is election reform. Regardless, “we will be doing our homework.”

To make that possible, the PACs cannot play games with the identification of their donors. “Transparency would be a big issue,” she says. “I would want to know where their donations come from.”

The campaign will also be transparent by providing “our most up-to-date information” about donations from PACs and individuals. So far, the largest individual donor to the campaign is Bruce Bastian, a longtime supporter of Democrats and, especially, gay candidates like Wright. He gave her $2,400.

Whichever PACs and individuals support her candidacy, Wright says she will make sure their intentions are good. “Money is power, so I want them to be responsible.”

While Wright takes the stance that she will only accept money from individuals and PACs with whom she shares ideology, Matheson has long maintained that the significant donations he receives from corporations and special interests do not influence his voting in Congress.

In mid-May, OpenSecrets.org released reports on PAC funding for incumbents. Matheson received 83 percent of his money from PACs—almost double what the typical House member receives and amounting to more than $800,000. The top three industries represented by those PACs were health care, pharmaceutical and oil companies.

In a statement to the Open Secrets blog, Matheson said: “I am proud that people choose to make campaign contributions to my campaign from across the political spectrum. There is zero connection between the source of the contributions that I receive and how I vote. I make each decision based on what I believe to be the merits of the issue. I run every campaign based on my approach to this job and on my record. This primary election will be no different.”

Additionally, the Blue Dog PAC—which supports Democrats like Matheson—has almost $2 million in cash. About half of its donations come from the health-care, financial-services and pharmaceutical industries.

Matheson’s spokeswoman Alyson Heyrend says, in an e-mail, that they expect PACs opposed to Matheson to get involved in every election cycle. Typically, it’s conservative PACs backing the Republican challenger, but having a liberal PAC like Blue America support Wright is not surprising, since Wright is in the primary.

“We’ve seen outside groups and outside money try to sway the electorate before,” she says. “[Matheson’s] confident that Utahns see through that and make up their own minds.”

If Wright’s early supporters are concerned that the possibility of beating Matheson is going to tempt her to take money from PACs that may not mesh with their liberal stance, they aren’t showing it. Instead, they continue to emphasize that what will push Wright to victory in the June 22 primary is not money, but on-the-ground support.

DeChristopher says Wright’s honesty is the biggest shield she has against the undue influence of PACs.

“The most important thing she is doing is clearly identifying her positions. She is not mincing words about those positions,” DeChristopher says.

Should Wright actually win the primary—she is still a long-shot—there would be another temptation in the form of money from the Democratic National Committee, which comes from many sources, including corporations and lobbyists, and is given to party nominees, especially those in swing districts. DeChristopher says that the DNC money has been a concern since the beginning, when they decided on an intraparty challenge to Matheson instead of running a third-party candidate. At the same time, “she’s running in the Democratic Party, so it wouldn’t make sense for her to turn down the money from the party.”

Ideally, Wright and her supporters would prefer publicly funded campaigns, because any private donation could be considered a corrupting influence. But until then, they have to work within the current fundraising parameters.

“We realize that all private money is special-interest money, even the $10 donation from a friend,” he says. “The only money that isn’t from a special interest is public money. But running a campaign with a system that doesn’t exist is hard.”