The ABCs of a Changing SLC 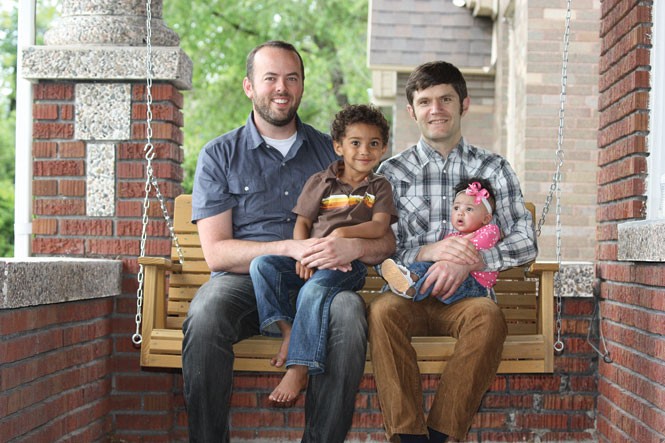 A well-rounded candidate for the Salt Lake City School Board ideally would have experience both as an involved parent and as a teacher in Utah's embattled public-education system. Weston Clark, who's looking to represent Salt Lake City School District 6, can check those boxes and then some.

While Clark jokes that he's still a traditional white male candidate, he hopes that, as an out-and-proud gay stay-at-home dad of two adopted biracial children, he can represent a school district that's charged with educating Salt Lake City's diverse population.

The importance of understanding the realities of the lives of those from different backgrounds is a lesson Clark likes to share. A former high school teacher in the Davis County School District, Clark says that one of his favorite assignments in his senior-level sociology course was to ask his students "to put themselves in an uncomfortable situation in the community and write about it; see if it changed their perspective." Students visited the churches of different faiths, dropped in at the Utah Pride Center and even visited a homeless shelter to see how reality matched up with their preconceived notions.

Now, as a candidate, Clark wants to not only help district policies reflect and support the diverse minority student populations in the city, but also educate the Legislature and other government organizations about the root causes of inequality that affect the education of Salt Lake City's schoolchildren—even if the issues aren't directly under the school board's purview.

He says that while he supports the Common Core curriculum, the state could do more to streamline the testing process that goes along with it. Currently, the testing is all done by computer, which, he says, has the double-whammy negative effect of pulling students out of their classrooms for two to three months of the school year and clogging computer labs with students testing instead of using technology to learn.

Clark also worries that the state, through its excessive testing, sends the message that teachers can't be trusted to do their jobs.

"We need to rely on them and trust them to educate our kids and to know what is best," Clark says.

Beyond his background teaching for three years and now being a stay-at-home dad, Clark has also been deeply active in Democratic politics. He served as the chair of the Salt Lake County Democratic Party from 2008 to 2011 and has, at different times, managed or advised campaigns for Salt Lake City Mayor Ralph Becker, Salt Lake County Mayor Ben McAdams and State Sen. Jim Dabakis, D-Salt Lake City.

He also spoke out publicly in 2012 when the Davis County School District pulled the book In Our Mothers' House from school shelves for its depiction of a family with same-sex parents.

Clark would like to see the Salt Lake City School District draw upon the national Human Rights Campaign's Welcoming School Initiative, which offers resources on preventing bullying and supporting diverse families. He says it could be modified to help support students of all minority groups, whether they're children of LGBT families or ethnic minorities struggling to fit in.

"I'd like to see what we can do to make the Salt Lake City School District a leader on that in the state—if not in the nation," Clark says.

He'd also advocate for more outreach to help disadvantaged students and their families learn about scholarships and other resources that they otherwise might not be familiar with.

The school board doesn't have authority over some of the dimensions of education policymaking that Clark is stumping on, but University of Utah political-science professor Matthew Burbank says it's not uncommon for candidates to want to use an office to influence other agencies—especially since the American system has so many different levels of government.

"If you talk about something like education policy, it isn't as if there is one set of rules that says 'Here is what we do for education.'" Burbank says. "It can depend on the Legislature, it can depend on the governor, it can depend on school boards for a lot of school districts, state rules, universities—there all kinds of things that work into that. So it's not uncommon for people to look at this and say this is a bit of a mess."

Burbank says it also helps voters when they find a candidate onto whom they can project their hopes, even if it's for campaign pledges that can't be directly fulfilled by the office they're running for.

Nevertheless, Clark sees the school board as a place of strength from which to advocate with other levels of government. He says that state issues such as job training and lowering college-tuition costs at public universities are integral to addressing the multi-generational poverty that disproportionately affects certain communities.

Creating educational opportunities requires change at the district level and beyond, and Clark wants to use the seat to strive for growing opportunities and decreasing the number of children stuck in cycles of poverty.

"Public education, to me, is the promise we've decided to make as a community and to our kids that we're going to give all of our kids an opportunity to succeed and better themselves," Clark says.