Frontman Greg Dulli is inspired by living fast but mindfully 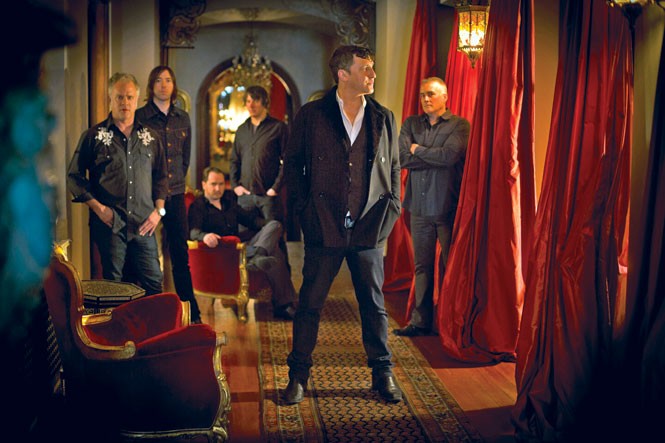 On Do to the Beast (Sub Pop), The Afghan Whigs' seventh album, main Whig Greg Dulli is in typical form, candidly and vividly brooding and purging through 10 guitar-driven, soul-infused tracks. As with classics like 1992's Congregation and 1993's Gentlemen (which Rhino will re-release with bonus content as Gentlemen at 21 on Oct. 27), Dulli takes you on a tense, cathartic ride. It took a while for him to pick us up—Beast is the first new music from the Cincinnati alt-rock band in 16 years—but it's worth the wait.

The album title comes from something Dulli said and his friend misheard as, "Do to the beast what you do to the bush." Via phone, Dulli says, "I really loved the sound of that. I'm a big phonetics fan. And it was enigmatic enough to hold my interest."

Enigmatic—that's Dulli. In January 2008, I was in New Orleans to interview him about The Gutter Twins, his project with Mark Lanegan. I'd be in town for only 36 hours, but Dulli called and postponed a few times. Finally, around 6 p.m., he swooped up curbside.

Dulli drove to the R Bar, a neighborhood joint he owned on the edge of the French Quarter. As we climbed the back stairs, dodging ladders and power tools, Dulli explained he was converting the R into a hotel. Only one room—"the penthouse"—was finished. It was mine for the night, Dulli said. Then he excused himself again.

Even when absent, Dulli filled the room. His cigarette smoke lingered behind him. He'd switched on the big-screen TV, tuned it to a black & white movie, and left it muted. Also, it's his place. He'd chosen the darkly stained hardwood floors, leather couches, red lamps, fireplace. Occasionally, he stayed here. And the red & black bar downstairs is where The Afghan Whigs hung out while recording 1965 (Columbia, 1998).

It was getting dark. The TV screen reflected in the windowpanes. An actor with a pencil-thin mustache laid a dramatic, tight-lipped kiss on an actress. I wondered how many of the film-noir scenes from Dulli's songs played out on that street corner? In the bar below? In this room? I decided I didn't want to know. It was better to imagine.

It was nearly 10 p.m. (my flight departed at 6 a.m.) when Dulli reappeared with drinks from downstairs. We started the interview, but he wanted to keep moving. This time I got to ride along.

Dulli steered his SUV through the French Quarter's dark streets. He spoke of Hurricane Katrina, pointed out famous graveyards. "This is Front Street," he said, and told the story of the Gutter Twins song it inspired.

In the present, I tell him that he seemed comfortable in that context. "Driving at night is relaxing to me," he says. "I drive through Los Angeles at night all the time. It's therapeutic."

We wound up at a bar where Dulli was to meet friends. I think, while ordering drinks, Dulli said he'd dated the bartender and she might be mad at him. I can't be sure; it was loud in there. Dulli's friends greeted him warmly. Everyone chatted for a bit, and then it was time again to go.

Driving again, Dulli shared some personal stories and listened to a couple of mine. We meandered around town and wound up in the back office of the R Bar, where we sat down at a tiny table surrounded by huge tin cans and cases of booze. We interviewed some more, and he scribbled something on a Garbage Pail Kid sticker for me before walking me back upstairs.

Dulli stayed for a minute, then split. A butt smoldered in the ashtray. It was after 12:30 a.m., but it felt like 4 a.m. Dulli moved fast, and it wore me out. I realized, then, that these songs he writes, so emotionally fraught and intense, are coming from a life lived fast but mindfully. I picked up the Garbage Pail Kid sticker and read his succinct message: Be happy.