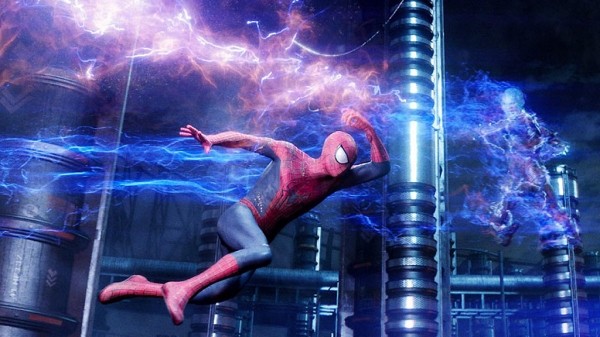 I stand on a bridge—metaphorically speaking—ready to throw myself over. Like Les Misérables’ Inspector Javert, I have committed myself with single-minded ferocity to a notion of justice, built around pursuing Sony’s Marc Webb-helmed Amazing Spider-Man franchise to the ends of the earth for its crimes against the memory of Sam Raimi’s magnificent early-2000s Spider-man films. And now, as The Amazing Spider-Man 2 arrives, I am rocked by a revelation that I may not be able to incorporate into my sense of self: What if this new movie doesn’t suck?

Please don’t misunderstand: It’s still not particularly good. There’s the matter of Andrew Garfield as a Peter Parker/Spider-Man who’s not remotely as appealing as Tobey Maguire at portraying an ordinary guy just trying to get by, while also living a life of extraordinary adventures. The plotting is too dense by several orders of magnitude, incorporating subplots that should require “meanwhile, back at that other thing that’s also happening” subtitles: deeper digging into the activities that took the lives of Peter’s parents (Campbell Scott and Embeth Davidtz); the transformation of nebbishy engineer Max (Jamie Foxx) into the pure-energy being Electro; the return of Peter’s old school buddy Harry Osborn (Dane DeHaan) to take over the family business, Oscorp, after the death of his father (Chris Cooper). Oh, and Aunt May (Sally Field) is taking night classes to become a nurse, so good for her, I guess.

But this one at least starts to get a few more things right as it distances itself from 2012’s clunky Amazing Spider-Man, as well as from Raimi’s films. Cut loose from the ridiculous rebooting of the origin story, Webb and his screenwriting team are able to focus more on the relationship between Peter and Gwen Stacy (Emma Stone). Theirs isn’t an easy arc to pull off, as Peter repeatedly waffles between his desire to be with Gwen and his promise to her dying father that he’ll stay away from her to keep her safe from his alter-ego’s dangerous enemies. Stone is such an appealing presence that the scenes between her and Garfield make it easier to overlook the herky-jerk rhythms of their romance on the way to a crucial turning point, while also making it more frustrating to see all the time wasted on Peter’s angst-ridden attempts to understand why Daddy abandoned him.

And yes, Webb isn’t a complete lost cause when it comes to putting together an action sequence. He doesn’t have anything approaching Raimi’s gift for using the geography of a scene to anchor the CGI acrobatics, but he still gives Spider-Man some satisfying spins through the concrete canyons of Manhattan, and finds a few uses for super-slo-mo scene inserts that actually help establish the stakes. It’s fortunate that the best moments come during the big showdown between Spider-man and the transformed Harry Osborn/Green Goblin, with the gears of a clock tower clicking ominously into place.

It’s no secret that Sony is attempting to create a Spider-Man-centered comic-book universe in the same way that Marvel Studios and Disney have done with their characters, and Amazing Spider-Man 2 features more than a few moments clearly designed to set up installments down the road for other characters; you don’t cast Paul Giamatti in a bit role as a Russian criminal who eventually puts on an armored suit, unless he’s going to be part of the Spider-Man cinematic family for a while. That busy-ness is part of what makes it impossible to fully embrace this movie, because you can never completely forget that it’s less about telling an individual story than keeping a machine chugging along.

Which is too bad, because the parts of the movie that are about an individual story—the resolution of Peter’s relationship with Gwen—do provide the kick that they’re meant to provide. The irony is that the motivation for Jamie Foxx’s Electro character is built entirely around envy—wanting to be noticed the way that the flashier Spider-man is, just as this franchise seems to be shouting “look at me!” while everybody showers their love on Raimi’s films and the current Marvel Studios successes. For now, I may give up my pursuit, because insecurity isn’t exactly a crime. It’s just a damned shame.