Deflated Euro: The American tries so hard to be oh-so European 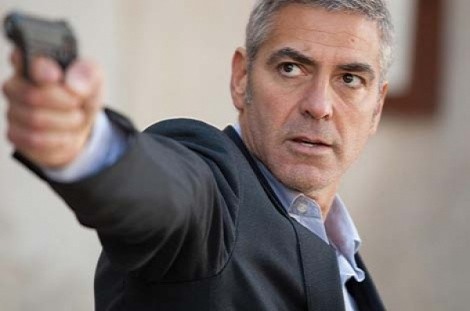 Usually, when people talk about a movie feeling “European,” it’s not exactly a compliment. It’s shorthand for languidly paced character-based drama, maybe with a few casually naked boobs and a general lack of Hollywood conventionality. The American feels very much like the product of people who want to make a “European”-style movie, yet forgot that fairly important last part of the description.

George Clooney plays a mysterious fellow—maybe his real name is Jack, maybe it’s Edward, maybe neither—but you get a sense right away for why he’s hard to pin down. Jack/Edward is a shadowy operative who sometimes kills people, and sometimes serves as the machinist creating specialized weaponry for someone else to do the dirty work. After killers track him down in the Swedish wilderness, he flees to Italy, and begins his latest assignment. Will it be his last—either by his own choice, or someone else’s?

The opening sequence does a remarkably efficient job of setting up Jack/Edward’s ruthlessness, and director Anton Corbijn (Control) builds tension through simple staging and spare use of orchestral score. Clooney’s performance provides a strong foundation for the enigmatic character, whose body language and darting eyes capture a guy who’s clearly expecting trouble around every corner.

But apparently he wasn’t expecting it from the screenplay. Rowan Joffe, adapting Martin Booth’s novel A Very Private Gentleman, eventually wallows in obviousness in his story about a killer searching for his soul. Jack/Edward begins chatting with a kindly priest (Paolo Bonacelli); he falls for a prostitute (Violante Placido). And both the tattoo on his back and later dialogue show us that our dangerous anti-hero is actually sensitive enough to be fascinated with butterflies. Even all those casually naked boobs and occasional gunshots can’t liven up the general tedium of a movie trying so hard to be oh-so European.