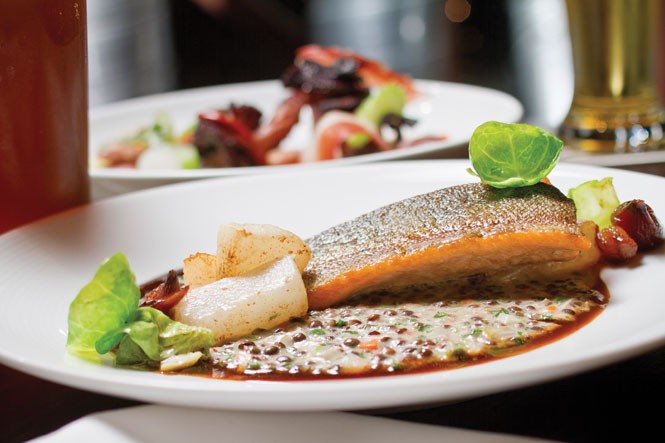 The past couple of years—and especially the past few months—have seen an explosion of new dining destinations in Sugar House. They range from medium-priced spots like Habit Burger, Pho Thin, Yellowfin and Flatbread Pizzeria to higher-end newcomers like Kimi's Chop & Oyster House, which I wrote about in the Dec. 11 City Weekly. In this week's portion of the Sugar House restaurant roundup, we'll take a look at newcomers Mellow Mushroom and Wasatch Brew Pub, as well as at the recent Annex reboot.

When I moved to Utah a couple of decades ago, I practically lived in the upstairs sports bar at Park City's Wasatch Brew Pub. I was on a first-name basis with beer-slingers Gordy, Mark, Darkside Dave, Jeff and others. I loved the beer, I loved the food, and I loved that the Wasatch Brewpub was the first microbrewery and pub to open in Utah, founded by Greg Schirf (another fellow I like a lot). I even love the Wasatch motto: "Continuing to misbehave since 1986."

So, why don't I have such warm feelings for the new Wasatch Brew Pub in Sugar House (2110 S. Highland Drive, 801-783-1127, WasatchBeers.com)? It's not because of the ambiance, which is perfectly fine: a large, loud, urban-industrial sort of space with high ceilings and a boisterous vibe. And, there's certainly nothing wrong with the beer selection, which features some of my Wasatch Brewery favorites like Jalapeño Cream Ale and the Lupulin Drift Session IPA, with its restrained hops and lower alcohol level.

With Wasatch's great beer in mind, the brew pub's hefeweizen flash-fried calamari ($13) sounded like a good place to start. We also decided to drink wine with our dinner during that visit—a decision that revealed some service misfires. The calamari arrived before the wine. We were told there was only one corkscrew at the pub and it took a while to locate. Granted, wine isn't Wasatch Brew Pub's specialty, but one corkscrew?

Once the wine was uncorked, we mentioned that the calamari was chewy, lukewarm and not in away way crisp. I also couldn't quite figure out why it was accompanied by pickled radishes, but that's another story. Our server took away the offending calamari and said they'd give it a second try. Unfortunately, the second effort at "flash-fried" calamari was identical to the first—chewy and soggy. It was clear that the oil hadn't been hot enough to fry the breaded squid. Our server removed the dish a second time and took it off our bill.

"Is medium-rare OK?" our server asked me about how I'd like my buffalo burger (it's bison, actually) cooked. "Perfect!" I replied, not suspecting it would actually arrive medium- to well-done, crisp and overcooked on the edges. The burger ($15) came with a ginormous pile of flavorless tater tots, which the kitchen did manage to get crispy.

No, I did not love the food at Wasatch's Sugar House location. But, I heard that it has recently lost its chef, so perhaps positive change is afoot.

By stark contrast, a meal at The Annex by Epic Brewing (1048 E. 2100 South, 801-742-5490, TheAnnexbyEpicBrewing.com) knocked my socks off. A recently acquired club license allows patrons to drink alcohol without ordering food. And a new chef, Craig Gerome, is firing on all cylinders in the kitchen.

I don't recall ever seeing beef tartare ($11) on a Utah restaurant menu, so I had to order it. It was a handball-size mound of minced raw Niman Ranch beef with crispy housemade lavash and a raw egg yolk on top, and it was divine.

Another killer appetizer was a half-dozen Bouchot mussels ($9) steamed in Berliner Weiss beer with garlic confit and crisp, crunchy shoestring potatoes. Some of the starters—the pasta, for example—could suffice as small entrees, like the housemade tagliatelle pasta with beef-cheek ragu and the generously portioned housemade ricotta. The pasta was some of the best I've ever eaten, and perfectly cooked al dente.

Exceptional entrees of steelhead trout with Beluga lentils ($23) and herb-fried chicken with fried green tomatoes and heavenly buttermilk risotto ($24) firmed up my notion that The Annex is one of the best dining options in Sugar House.

With longtime joints Este and Salt Lake Pizza & Pasta in the mix, as well as the newer Flatbread Neopolitan Pizzeria, you might not think Sugar House needs another pizza place. But, apparently the folks at the Atlanta-based Mellow Mushroom (1080 E. 2100 South, 801-844-1444, MellowMushroom.com) do.

Perhaps the largely contrived hippy vibe at Mellow Mushroom explains why a pizza would take 25 minutes to make. I would have expected more rapid service, but I must say that I really do like Mellow Mushroom pizza.

The red sauce tastes of bright, ripe tomatoes—not the bitter tomato paste that mars so many commercial pizzas. And the toppings are plentiful and of good quality. The crust is of medium thickness, slightly crisp on the bottom with a nice crunchy and lightly blistered outer crust.

And, there's wine, cocktails and a formidable beer selection, to boot, with two-dozen local craft beers on tap and more than 70 bottled brews, including ones from Deschutes, Big Sky, Rogue and others. They'll help you remain mellow while awaiting your pie.