Our yearly Arts Issue goes with everything. 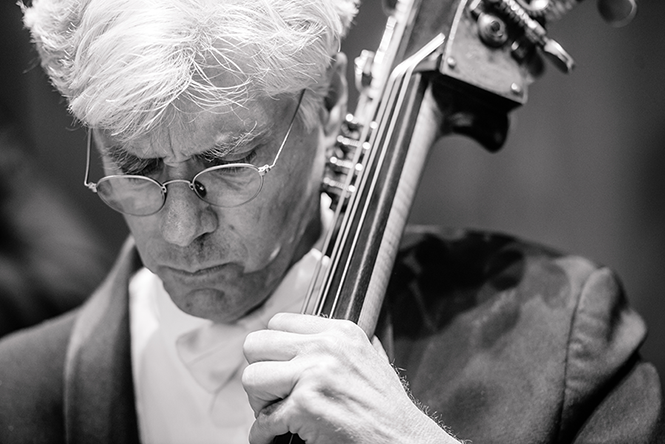 The Sound from the Stage
A veteran Utah Symphony musician considers performing before and after the new hall.
By Scott Renshaw

After more than 40 years with the Utah Symphony, Jamie Allyn, pictured, has a unique perspective on playing in Abravanel Hall. He's one of the few musicians whose tenure allows them the ability to compare what it's like to play in Abravanel to the Symphony's previous home in the Tabernacle at Temple Square.

Allyn, who plays double bass, joined the symphony in 1978, during its final season playing in the Tabernacle. His recollection of that space centers on how long sound would resonate throughout the space. "It's a very live hall; the echo just goes on forever," Allyn says. "It bounces off all kinds of surfaces. It made ensemble really difficult. Bass are on the periphery, so it made hearing across the orchestra challenging. Am I really hearing the violin, or the echo?"

He recalls that there was excitement among his colleagues regarding the soon-to-open Symphony Hall during that 1978-79 season, but not just because of the potential for improved acoustics. Logistically, it was difficult for the musicians to be using a performance space that wasn't completely their "home." "They were just so excited to be moving into a place where we could rehearse and give concerts," Allyn says. "We used to have to rehearse at places around town. So with the new facility, we could keep instruments in the hall, and not have to lug instruments back and forth."

Once the Symphony Hall opened in 1979, it was clear that the custom-designed symphony hall had different acoustics. Yet for Allyn, those acoustics were designed less for the musicians themselves than for those in the audience. "It was clear that it was much easier to hear colleagues on the other side of the orchestra," he says. "But for me, the sound on the stage, the sound that I make, is not particularly gratifying. It sounds better far away. I've been in halls where the sound under your ear is much deeper and warmer—Carnegie Hall, or the Symphony Hall in Boston. Here, you go out in the audience, and it's a totally different story. ... If I put a tape recorder out in the hall, and play on stage, I like the sound I hear on the recorder."

He also notes that there, as with any building, there are acoustical quirks in different onstage locations. "There are little 'hot spots,'" Allyn says. "If I sit my stool right up against the side walls, on the east side of the stage, you get enveloped in that. It's a really nice warm sound. I wish it sounded like that when I'm 15 feet away."

While Allyn acknowledges that every musician's experience and perspective can be different, he remembers an anecdote from one of the first seasons at the Symphony Hall involving the celebrated violinist Yehudi Menuhin, who was visiting to play with the Utah Symphony. At the end of the performance, Allyn recalls, "when the applause died down, [Menuhin] said, 'The sound of halls is sometimes much nicer if you go to the back of the hall.' So he went to the back wall and did his encore. At that point I thought, 'Well, I'm not crazy.'"