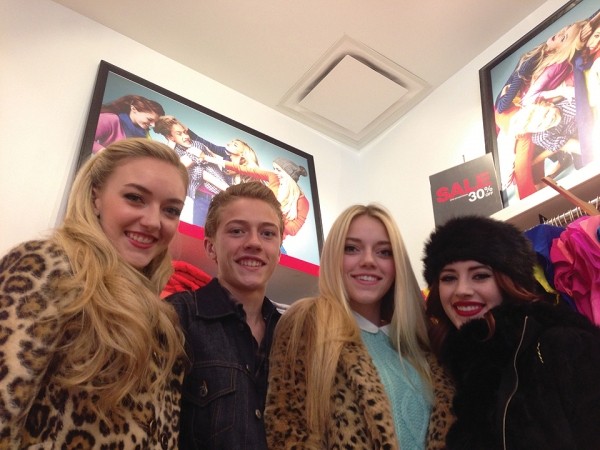 The Atomics, comprised of the four Smith siblings, ages 14 to 19, look like the poster children of teenage fashion, seemingly cut from a designer’s book and placed here at City Creek Center. It’s 3 p.m. on a random Tuesday, but they’re dressed to the nines.

“This,” says Starlie Smith, 19, gesturing down to her chichi black outfit, “is my life.” The guitarist stands beside her two sisters and brother in front of a framed photo hung above colorful shirts. The photo is of them; we are inside Gap.

Half an hour earlier, their mother, Sheridan, says—before I can even sit down at the cafe where we met for this interview—the Smiths are vying for a reality TV show. “Our family—we just do crazy things,” says bassist Daisy, 15. “There’s always a lot going on,” says guitarist Pyper, 17.

Then, Sheridan asks if she can film part of the interview for a sizzle reel. “We need to show a day in the life: school, drama, yelling, everything”—and, of course, the music, says Dallon, their father and music teacher.

The band practices their brand of surf-rock—covers of “Fever,” “Wipe Out,” “Pipeline,” etc.—for, generally, an hour a day in the basement of their Spanish Fork home. “It’s like herding cats,” Dallon says. There’s sometimes more laughing than singing, more inside jokes than playing in the pocket.

“No, but we’re good. We do practice. Sometimes it’s just hard to … stay focused,” Starlie says. Sometimes it’s due to ADD—as Sheridan points out multiple times—lack of motivation or made-for-reality-TV home drama.

But there’s one rule for practice: Once you’re in the music room, whatever drama happened before practice has no place there. “The band members are your family, so it’s not like you can just kick them out and replace them,” Pyper says. “We feel like we have to work through it.”

The making of The Atomics goes back eight years to what they call “Rock & Roll Christmas,” when the siblings all received instruments, an intentional family- oriented decision. “It’s made us all really tight—the kids really close and good friends,” Sheridan says. Each band member later echoed that sentiment.

Surf rock was a natural fit for The Atomics. The likes of The Ventures, Dick Dale, The B52s and so on are always on the car stereo; it’s a genre everyone can all agree upon, and it’s good for cultivating musicianship, Dallon says.

The Atomics’ first gig was at a summer car show in Spanish Fork. “Looking back, we were really not good,” says Daisy with a laugh. That was four years ago, and their playing has improved since then. The Atomics performed at KRCL’s Polar Jubilee—themed “Surfin’ Safari”—on Nov. 30.

“I just really want to be famous,” Starlie says. “I just really love music and performing. Having the next show is what motivates me. And the shows just keep getting better.”

The show is more than just performing, though. “Getting ready for a gig is a sacred process,” Daisy says, adding that it can take hours.

“Sometimes my mom will make Daisy re-do her hair if it’s not big enough,” Pyper says.

But Dallon and Sheridan insist that the band focuses on the music and looks beyond costumes, big hair or the many modeling gigs. Practice, practice, practice. It’s something that the kids can work toward—nailing a cover or writing new material—unlike landing the Gap holiday campaign, which happened suddenly, thanks to The Atomics’ agent.

The Atomics are featured in Gap’s TV commercials and in print media, alongside Nas, Aubrey Plaza and Rufus Wainwright. “It was really exciting,” says shy drummer Lucky, 14, speaking for the first time.

But Dallon offers up regular reality checks to his kids, saying things like this: “You got this commercial and modeling gigs, but it’s just bone structure. You lucked out. It’s nothing you did substantially,” he says. “I think the music’s good because they have to work on it.”