The Avalon vs. South Salt Lake 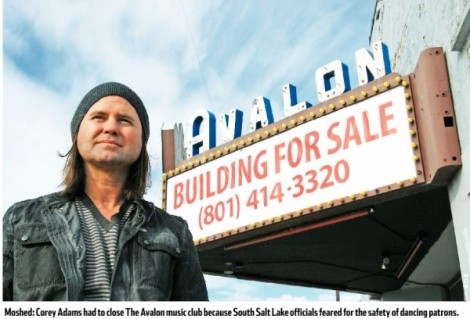 Corey Adams fell in love with the Avalon Theater four years ago. “It’s really hard to find old theaters like this,” the 40-year-old veteran concert promoter says about the one-time cinema at 3605 S. State.

He bought the Avalon for $400,000 in 2005 and turned it into an all-ages venue featuring hardcore and rock bands. He also allowed what he calls “a nondenominational” church, with whom he has a personal relationship, to hold meetings there. Above the theater, he built himself an apartment.

But from the get-go, he struggled with South Salt Lake’s fire marshal, Bruce Shoemaker. “It was personal from day one,” Adams says. “I came in here and did concerts, against his wishes.” That struggle finally led to South Salt Lake revoking his business license, because Adams says, “of people dancing,” and, in particular, moshing.

After Adams bought the theater, he ripped out the dilapidated seats and put in two additional exit doors on either side of the main auditorium. Shoemaker told him to put the seats back in, but since he had trashed them, Adams put in benches. Shoemaker, who said in court he didn’t have experience with concert venues, tried but failed to have the benches removed. Adams says Shoemaker harassed him over several years by hanging around outside the theater or going through his garbage.

South Salt Lake City Attorney Paul Roberts says Adams “was very suspicious of our motives. He thought we were just being vindictive.” He adds, “A little more cooperation would have gone a long way.” Fire marshal Shoemaker, Roberts says, “has a genuine concern for the safety of the occupants.”

In April 2009, Adams and his attorney, Lisa Marcy, met with Shoemaker and city officials. Both sides thought they had reached a resolution, although nothing was put in writing. Adams says he agreed to do all he could to keep patrons from moshing. Shoemaker told the court, “We came to an agreement … to not permit assembly in front of the stage.”

South Salt Lake’s pressure to curb moshing came back to haunt the venue. Adams stopped booking hardcore bands and started warning patrons not to dance aggressively. Hardcore fans turned against the venue, boycotting its shows because they were not allowed to mosh. “They took it as we were being discriminatory,” Adams says.

In a June 22 letter, Adams received notice that his license was being pulled. He appealed, and on Aug. 13, administrative law judge Ken Wallentine heard the six-hour-long case.

In his opening statement, South Salt Lake´s Roberts said the Avalon allowed people “to engage in moshing,” which is “a threat to the safety of patrons.” Marcy responded by saying the opposition to the venue reminded her of the Puritans, who prohibited dancing.

Camron Sherwood from Sunset testified he had attended a concert by heavy metal band Emmure in November 2008. A fight broke out in the shoulder-to-shoulder crowd in front of the stage, and security personnel maced the group fighting, leading to a mass exodus from the theater.

Adams says Sherwood started the fight during the Emmure show. After the concert was halted, Sherwood and other angry attendees threw rocks that resulted in injuries to Adams and his sound engineer that required stitches. Sherwood was subsequently banned from the Avalon and other Adamslinked venues.

Adams says that Sherwood wasn’t the only person who was ejected from the venue, then called by South Salt Lake´s attorney to testify against him.

On April 24, Jessica Johnson took her 14-year-old daughter to see The Horrorpops. They ended up in front of the stage in a crowd so packed there was “hardly any room to breathe,” she told the court.

Johnson told Marcy she had been to several hardcore concerts before and could handle them. But her daughter was not as seasoned. She was punched in the stomach. Furious, Johnson fought Avalon security, then called South Salt Lake Police Department. Johnson, whom Marcy described in legal documents as “overwrought,” denied she was thrown out of the venue.

Along with disenchanted customers, Roberts called several police officers to testify, one of whom was Officer Jerry Silva.

Silva said while driving by the Avalon earlier this year, he saw a crowd and went in with several undercover officers. He noted two security guards failed to control the 125 to 150 people crammed in front of the stage.

Marcy called SmithsTix Vice President Dee-Dee Hill, who told the court that the entertainment industry has struggled with moshing for 15 years. Even at an E Center concert by Australian children’s band The Wiggles, she says, 3-year-olds were “going crazy” in front of the stage in “a baby mosh pit.” Moshing, she said, is impossible to stop, “but you have to control it; you have to manage it.”

Hill said her company sold 30,000 to 40,000 Avalon tickets each year. In its four years, she received one complaint—from Shoemaker, who was concerned about overselling of the Avalon.

On Aug. 27, Judge Wallentine issued his written ruling. The testimony of Officer Silva was “credible and compelling,” and the conditions he witnessed “plainly constituted overcrowding.”

Adams had to close down. A disappointed Marcy says while Wallentine was fair and impartial, “his decision was not based on the empirical evidence that we submitted.” What it came down to, she says, was that the fire marshal felt there was a safety issue and so South Salt Lake yanked Adams’ license. “How do you punch holes in something like that?” she asks.

Avalon’s music and its audience, Marcy says, made city officials “really uncomfortable.” South Salt Lake City Attorney Roberts disagrees. “It was not our intention to take away a particular type of music,” he says.

SmithsTix’s Hill compares the Avalon’s fate to the movie Footloose. “There’s no dancing in South Salt Lake,” she says.