Wait for the ass-kickings to commence 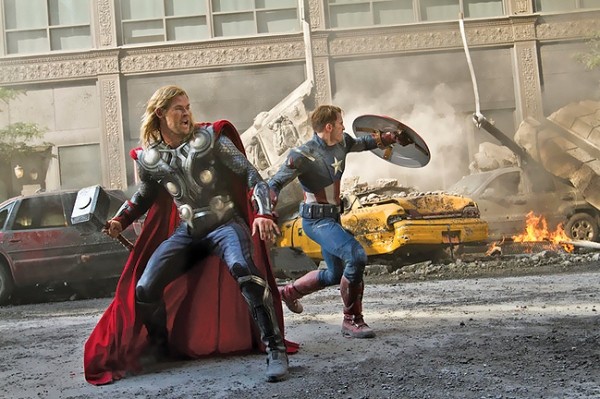 From Harry Potter to Twilight, from The Hunger Games to the new Marvel’s The Avengers and every comic-book movie that has preceded it, adaptations of beloved pop-culture properties face a question that is rarely asked, but pretty much always should be: Do the fans love them because they’re great, or simply because they exist?


Fan-thusiasms being what they are, you’d almost never get adherents to cop to the latter, obvious though it may be to those peering in befuddlement from the outside. Stories and characters that we encounter at particular times in our lives begin to resonate in ways that are indefensible through conventional means. Yeah, yeah, the editing was jittery, and sure, the narrative bends under the strain of its need to please the true believers. But that’s Katniss up there on a screen in three dimensions! Bella and Edward! Professor Snape! The X-Men! What part of that do you not understand?


So if there’s one thing that must be clear about The Avengers, it’s that in some ways it’s impossible for someone who grew up loving super-hero comic books to separate that love from the actual film writer/director Joss Whedon has created. Shrug however you might at a story that has to pack so many characters and tangents into 140 minutes; it will still be difficult for me to see beyond the joyous awesomeness.


That’s a vibe that Whedon—a self-professed geek of the first order who has written for comic books in addition to his fan-beloved work on TV series like Buffy the Vampire Slayer and Firefly—embraces unapologetically. Though there’s an inevitable amount of table-setting that must be done as Agent Nick Fury (Samuel L. Jackson) brings together “Earth’s mightiest heroes” to face the threat of an extra-dimensional invasion led by Loki (Tom Hiddleston), Whedon assumes that the audience’s familiarity with these characters from their respective solo films will do most of the heavy lifting. If you didn’t see the origins of Iron Man (Robert Downey, Jr.), Dr. Bruce Banner/The Hulk (Mark Ruffalo), Thor (Chris Hemsworth) or Captain America (Chris Evans), you’re welcome to sit back, not understand a bunch of Whedon’s smart referential dialogue and wait for the ass-kickings to commence.


And commence they ultimately do, in giddiness-making combinations. For a large chunk of the movie, that means battles between the heroes themselves as they try to move beyond their competing agendas and find the common ground to become a team. Thor and Iron Man go at it; Thor and The Hulk exchange subwoofer-shaking body blows; Black Widow (Scarlett Johansson) and the archer Hawkeye (Jeremy Renner) engage in more down-to-earth fisticuffs. Like every comic-book nerd, Whedon grew up on “who would win a fight between …?” conversations. Given the opportunity and the budget to bring those conversations to life, he immerses himself and his audience in the experience.


It all serves as elaborate prelude, however, to a 40-minute finale in which a hole in the sky over Manhattan begins vomiting forth an endless supply of faceless villains just waiting to be dispatched with a flourish. It’s a flourish Whedon is happy to provide, finding glorious ways for his heroes to save the world in style, whether independently or in various combinations, like Iron Man launching a ricochet blast off of Captain America’s shield. Nearly all of the best moments seem to involve The Hulk, whom Whedon clearly understands how to use in a way the two disappointing Hulk films never did. The only truly fitting description of the audience response to Hulk’s Greatest Hits would be “and the crowd goes wild.”


Was there a better way to make an Avengers movie than the way Whedon opted to make it? Maybe. Perhaps the shadowy cabal behind the scenes of S.H.I.E.L.D. could have been axed, or the opportunities for real character moments beefed up. There’s little in the way of emotional connection developed, something it’s clear from his previous work that Whedon does know how to achieve. The Avengers aspires to little more than gathering its geek-tastic all-star team together, pointing them in the direction of the nearest impending apocalypse and saying, “Go get ’em.” Those who’ve been waiting for that moment for decades are going to love that it seems to have been done right—even if, deep in our hearts, we also love that it was done at all.