Utah blogger shifts from humor to inspiration after going viral 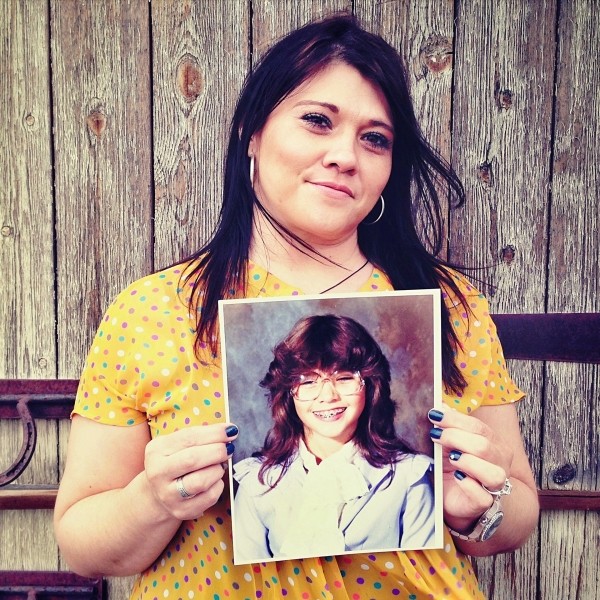 The 11-year-old Merilee Allred captured in a Big Sky Elementary yearbook is wearing a friendship bracelet that she made for herself. In front of a gaudy early-’90s backdrop, she’s sporting poofy bangs, permed hair and giant glasses that fade from purple to clear. Outside the frame, she didn’t fit in, and was called names like “Gumby” and “Four Eyes.”

Thousands upon thousands of people worldwide have now seen this photo, but it took some cajoling for Allred, a now-35-year-old Salt Lake City resident, to show it to the world. A friend wouldn’t believe that Allred was awkward back then and demanded proof, which sparked the idea for AwkwardYearsProject.Tumblr.com, a blog with captioned pictures of a person holding up a photo from his or her “awkward years.”

Allred made her first post to Tumblr and Instagram four months ago. “I felt like I couldn’t just send this picture out into the digital universe by itself,” she says, adding that she felt comfortable as long as it was a then-and-now shot. Allred took more photos of her friends doing the same, and by the luck of her winning an unrelated Instagram contest and having someone scroll through her back-dated images, the whole thing went viral. It landed on national online outlets like Laughing Squid, Huffington Post and Mashable, all before the site had 10 submissions.

Allred is still trying to make sense of the popularity. Initially, Allred wanted to be the sole curator of content, but with an overwhelming number of readers asking to submit photos, the project evolved quickly. “I only know a certain amount of people, and I don’t know how far I could have taken it,” Allred says. “If I could get a lot of people to submit, I could keep this project going, and get more people excited about it.”

Naturally, she began asking herself what the blog’s mission was—whether it was simply lighthearted and laugh-inducing, or should it aspire to make meaningful connections. “Since I was teased and bullied, I thought it would be a good idea to raise awareness with it, and, maybe, hopefully help kids currently going through struggles, to let them know that life does get better,” Allred says. She began including a short questionnaire with each post so submitters could describe their awkward years, whether it was a funny anecdote or a more somber story about being bullied.

Most people will probably visit the blog because the photos are funny, and if they can get something more out of it, that’s a bonus. The photography itself isn’t incredible—all taken on cell phones, whether Allred’s or guests’ submissions—but the content can be profound, and that’s what matters, Allred says.

A project like this straddles the line between a blog and a photo essay; with user submissions, it leans toward the former. “It’s cool to see that level of collaboration,” says Trent Nelson, Salt Lake Tribune chief photographer and the editor of UtahPhotoJournalism.com. “That’s the art of how we share our visual memories and our visual experience now.”

But, Nelson says, “You have a short window to make an impact, because people will move on—at most they add it to their blog feed. These blogs are a flash in the pan.”

Can blogs sustain momentum after going viral? Allred hopes so. Although she says she had no big-picture plans before the blog went viral, she now wants to make this a full-time occupation, including site advertisements (in place as of last week) and public speaking on the topic of bullying and cyber-bullying to middle-schoolers around the country to “help them through it and find ways to get stronger from getting bullied.” Based on the volume of Awkward Years Project readers, she says, there’s a need.

In the past two months, offshoots have sprouted across the world, and there’s one focused on the LGBT community called the Straight Years Project. The Awkward Years Project’s tagline has changed from a jokey “It gets so much better,” to a more Oprah-ified and inspiring “Be proud of who you are,” which seems better suited for Allred’s new purpose.

To that end, Allred posted a comment on the blog four weeks ago defending it against naysayers, who’ve criticized the Awkward Years Project as a “look how I got cute” blog: “This blog is about self-discovery and surviving our awkward years,” she said. “Most, if not everyone I have blogged about so far, are not only are proud of who they are now, but they are even proud of who they were back then. It just took a while for most of us to realize it.”