The Banality of Evil

The Brink captures Steve Bannon as a depressingly familiar monster. 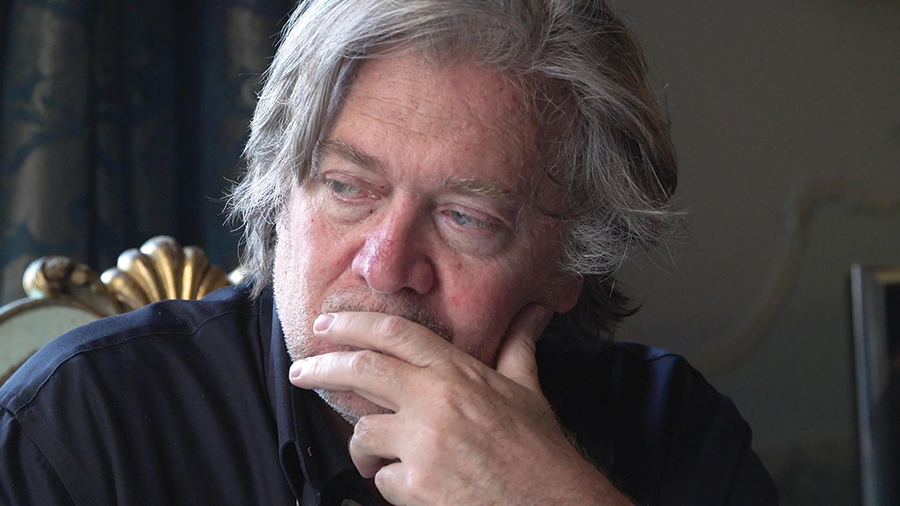 At which point in the political and cultural shitshow cycle do we stand right now? If it's winding down, and we are about to begin the upswing back toward sanity (though I concede there is no specific evidence of this), then this film could be an essential chronicle of one piece of the mess—a cautionary tale of the kind of vile bastard to keep an eye out for next time. ForThe Brinkis a documentary portrait of Donald Trump's propagandist, chief strategist and architect of the Muslim ban, Steve Bannon—and, perhaps, a last-gasp attempt by its human-dumpster-fire subject to demonstrate his relevance and importance.

That might explain why he gave director Alison Klayman (Ai Weiwei: Never Sorry) such free rein. She embedded herself as a one-woman filmmaking crew into Bannon's life in the year leading up to the 2018 U.S. midterm elections, with total access; Bannon had no creative input or control over the final product. Was his willingness to agree to such terms because he knew this might be his last opportunity to be the center of attention; because he knew he had nothing to lose?

The other possibility is downright horrifying: What if things are still going to get much worse? What if we're actually in the 1938 part of this particular cycle, and the 1940s are on the horizon? Maybe Bannon doesn't care that Klayman had such an intimate view of his awfulness—his bigotry is on full parade here—because he is going to continue winning, and the triumph of his racist white-nationalism is going to spread even further. (His confidence in the correctness of his perspective might be the most terrifying thing Klayman captures.) Bannon is already an instrumental figure in the behind-the-scenes manufacturing of the Brexit vote in 2016, and his Brexit pal Nigel Farage appears here; I might have thrown something at the screen at that point. We see asThe Brinkends that Bannon is focused on ensuring that the 2019 EU elections, now mere weeks away, will continue to fan the ultra-right-wing flames already burning across Europe.

What would a portrait of Nazi propaganda minister Joseph Goebbels have looked like in 1938? Would it have served as a call to action? Might the events to come have unfolded differently with an advance warning not only of the evil plans afoot, but of the political and cultural manipulations that would be deployed to enact them? This shit has got to be countered, somehow; can we use the evidence on display here to help? Or is it already too late?

Lest you think Goebbels is too extreme a comparison, know that in The Brink Bannon calmly and with admiration talks about the design precision of Birkenau concentration camp, and also asks, as he ponders his work, "What would [Hitler's filmmaker] Leni Riefenstahl do?" I feared Klaymanmight end up trying to humanize Bannon, might create some sympathy for him, but he seems beyond that. He appears devoid of personality and lacking in any human warmth. He's an ugly, nasty, self-congratulatory, hypocritical pustule fomenting hatred and race war, and there's literally nothing else to him. The best that might be said of Bannon is that he puts the banality in "the banality of evil"; he might be dangerous, but he isn't even dangerous in an original way. He's a depressingly familiar monster.

The Brinkis a deeply unpleasant film to watch, but it's a vital one for appreciating just how big a mess we're in. And it's a film that we will be digesting for a while yet, for this is a dispatch from the present to the future, from the middle of a story that has not yet ended. If we're lucky, this movie might help us end it well.