Looking back on a jam-packed year of music.

I could cram in a cavalcade of New Year's clichés, but I'll get right to it: my totally unscientific, randomly ordered best-of list from 2018, which includes the highlights of my concert-going, record-listening, band-interviewing year. This could easily stretch from the six choices here to 60 or even 600, but these moments stand out in my mind and have me excited for what's to come in 2019. Let's make more memories like these soon.

Best Outdoor Concert Experience: Red Butte Garden Concerts. I sampled more than a few outdoor shows in 2018—Ogden Twilight, Salt Lake Community College Twilight Concert Series, Night on Commonwealth—but the by-and-large winner for me was the stacked Red Butte lineup. With 21 years in the books, 2018 represented a major leap forward in terms of booking, including international favorites like Gipsy Kings, Angélique Kidjo and Rodrigo y Gabriela rubbing shoulders with Americana standouts like The Avett Brothers, Ryan Adams and Shakey Graves and retro pop stars aplenty like Violent Femmes, Sheryl Crow, Jackson Browne and Chris Isaak. Beyond the bands, it's the atmosphere at Red Butte that matters: Nestled into Salt Lake City's east bench, with the stars and moon above, it's the only place I've been where lines are nonexistent, food and drink options are whatever you pack in your picnic basket and all ages of the concert-going spectrum are represented. When's the lineup release announcement for 2019?

Most Lit Night Out: Alex Cameron at The Urban Lounge. Honest confession No. 1: I circled this March 3 concert mostly because of my love for the opening act, Austin-based chanteuse Molly Burch. I knew Aussie Alex Cameron was an instigator and a party-starter, a proprietor of icy synth-pop that sardonically examined male toxicity by scoring it with a driving beat. Little did I know that a couple hundred of my closest friends and I would be dancing up a storm on this cold night while Cameron and his crack backing band gyrated and howled, building and releasing tension with each track. Three of those supporting cast members—psychedelic guitarist Jack Ladder, sex-positive pop savant Holiday Sidewinder and crane-obsessed sax man Roy Molloy—captured my heart as 2018 went on, too, making a 2019 return visit must-see programming. As the guy in the white truck said as he drove off into the night, "Al Cam forever!"

Best Big-City Crossover Moment: Machine Dazzle and Taylor Mac at Kingsbury Hall. Although Matthew "Machine Dazzle" Flower is best described as a surrealist conceptual artist, his Nov. 2 appearance at Kingsbury Hall with Taylor Mac was a lavish, ambitious set piece that tried to relate A 24-Decade History of Popular Music. Originally conceived by Mac as a "marathon performance art concert that tells the history of America through the perspectives of those whose stories are often forgotten, dismissed or buried," this abridged version found Machine Dazzle bringing along elaborate costumes representing the years 1776-1806. Raised in Idaho Falls as a gay man enamored with drag, Machine Dazzle's roots in the area run deep, making his return in November an event so momentous it was called out by Hilton Als, Pulitzer Prize-winning drama critic for The New Yorker. As Als so beautifully said, "Machine Dazzle is, more than anything, an excavator of the subconscious, who longs to show his country what he sees in it." Thank goodness he came back to Salt Lake City to show us what we're all capable of.

Best Space for Late-Night Dancing: Sphere. The first concert I attended in Utah was so damned fun I followed the stream of humanity out onto the street full of fever and fire for a few more hours of dancing. My partner and I met a few friendly folks who gave us tips on the best place to buy artisanal cookies and the best dog-friendly hikes in Millcreek Canyon. The one piece of information they couldn't provide, however, was the best way to extend the party into the wee hours. "After-parties aren't really a thing here," they said, to my general dismay. Thank goodness Sphere, a warehouse space way out west in Salt Lake City's industrial hinterlands, stepped in to fill that yawning need in 2017. With trippy audiovisual journeys in a cosmically decorated space, Sphere's well-curated events often stretch until 5 a.m., giving big-city DJs a reason to come to town and local house and techno aficionados somewhere to sweat up a storm. And with names like Cosmic Catacombs, Galaxy Quest, Mystic Isle and Body Heat, these events give a transcendent, conceptual luster to just another night out on the town. New World Presents kicks 2019 off right at Sphere with Sol—perhaps I'll see you there?

Most Promising Trend: The tight-knit female DJ community. Speaking of SLC's fervent house and techno community, the best aspect I've picked up on is the camaraderie between DJs. When one spins, the others dance; when one leaves the decks, the other picks up seamlessly. Nowhere was that more obvious than at October's 20th anniversary party for New City Movement at the former Club Bricks. Closing out the rooftop lounge, two women, Artemis and Choice, kept everyone warm with fire beats and flawless transitions, laughing and trading shots as they switched spots with an easy familiarity and infectious energy. Later, when the rooftop closed and the party moved inside, I spotted Tina, who wowed me at the City Weekly Battle of the DJs in August, dancing with Artemis and Choice and a host of other friends, reinforcing the bonds that these women share. I know these three only represent the tip of the iceberg when it comes to female DJs in and around Salt Lake City, but their evident friendship inspired me to learn more. After all, if the DJs are having fun, the crowd is sure to follow. 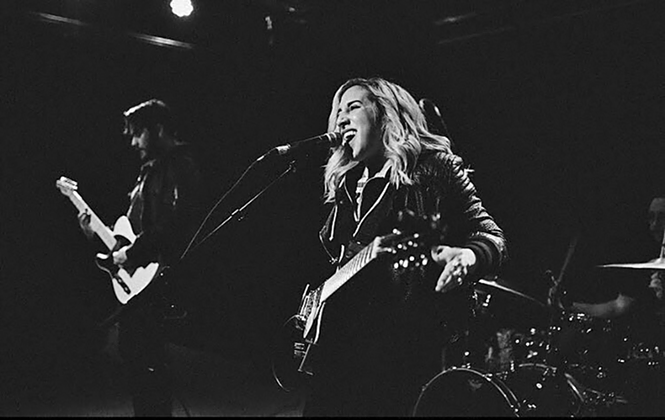 Tightest Debut Release: City Ghost's When the Lights Go Out. On paper, Sadie O'Neill and Matt Mascarenas shouldn't have even started a band together. O'Neill comes from a folkie singer/songwriter scene in Los Angeles, while Mascarenas specializes in post-hardcore and emo-inflected heavy rock. But when the two ran into each other, a creative spark was ignited—one that came to full combustion in Wes Johnson's newly christened Archive Recordings studio last summer. With Ken Vallejos and Chase Griffis backing them, O'Neill and Mascarenas co-wrote six excellent songs for their new band City Ghost's debut release, playing them live in their entirety for the first time in December at a celebratory show at The Urban Lounge. Mixing the concise narrative specificity of Hop Along's Frances Quinlan with a moving, mournful voice akin to Erika Wennerstrom of Heartless Bastards, City Ghost should make waves in 2019. O'Neill hit her groove so well with Mascarenas and the rest of the band that her father, who flew in from Los Angeles just for the show, raved afterward about how the band had "it"—that special something that really sets it apart. And if City Ghost can claim that after just seven months together and boast a powerful EP already under its belt, imagine what comes next?