The Bold and the Beautiful

These beers are more complicated that a Mexican telenovela 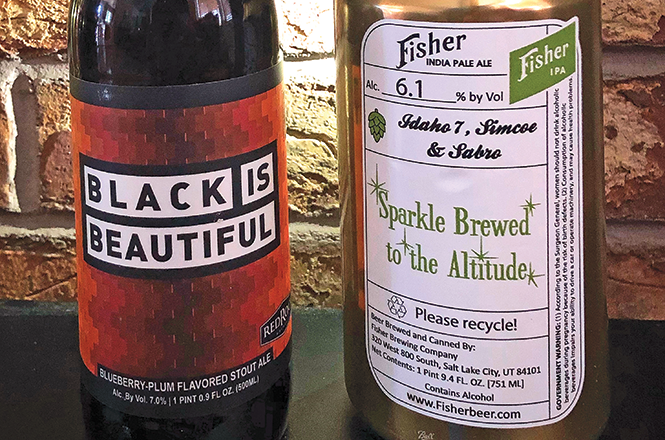 If I were dating this week's beers, they'd probably dump me for a less fickle beer nerd. However, if they were to stick around, I'd have a tough time breaking up with either one. Hey, If Brigham could have a gazillion wives, I could have a couple of beer mistresses. Right?

Red Rock Black Is Beautiful: I've discussed a few of the local Black Is Beautiful beers here over the past couple of months. Organized by Weathered Souls Brewing Co. of Texas, Black Is Beautiful is a collaborative effort among the brewing community and its supporters who believe in bringing awareness to the injustices that many people of color face. Red Rock is donating a portion of profits to the Utah YMCA and the Rocky Mountain Innocence Center.

This beer pours pitch black, with a seriously dark brown head that goes down quickly and leaves a small film on top of the beer. Initially, you get a nose of roasted notes and blueberry—a dark-chocolate-covered blueberry kind of vibe, but with hints of coffee in there as well. The result proved quite pleasant to my nose holes.

The first thing I notice about the taste is that there's a sweet, slightly sour blueberry character, and then the roasted bitterness. Rather than dominating the beer, the blueberry complements it very nicely without becoming too much. The sweetness and tanginess from the blueberries and plum don't leave an unappealing, artificial-fruit sort of aftertaste. The finish is very mildly bitter, with more of that blueberry flavor. As a whole, this isn't a bitter beer much at all, thanks to the contribution of the plum and blueberry. There's a slight bit of it from the roasted malt, which is to be expected, but it's nicely balanced, and the 7.0 percent alcohol isn't noticeable at all.

Overall: One of my new favorites from Red Rock. It's not often that you see a fruit-infused stout turn out to be as tasty as this one is. Again, the berry and stone fruit are there to accent this beer, not turn it into fruit juice, so definitely try this one out.

Fisher Rotating IPA (Idaho 7, Simcoe and Sabro): This pours a yellowish golden-orange color. The beer itself is mostly clear, with a very slight haze from the intense amount of dry-hopping. The retention on the heady foam here is very solid. The nose is certainly sticky and dank, with grassy, herbal notes and a bit of ruby red grapefruit. There's also a strange tannic/ester quality, with an undercurrent of earthy mint—definitely weird, but also kind of great due to how out-of-left-field it comes off. This is a hop blend you are not likely to see come up very often.

Once in the mouth, it's oily and sticky with a lot of dank/catty flavors and some raw resinous pine notes. Here and there, I can get some of the red grapefruit and orange peel, but this just drowns the palate in oil, when all's said and done. I'm still getting a bit of the earthy note from the nose, but it takes a backseat to the dank and green element of these hops—pungent and bitter with some subversive qualities that I appreciate, and that could potentially inspire brewers to think outside of the box with regards to hop utilization (which is a great thing, in my opinion).

Overall: This 6.1 percent beer has a solid flow on the tongue. I really enjoy getting reacquainted with bitter and hoppy IPAs. There's just something about that lingering resinous bitterness that lights up every sensory cord in my mouth. If you want some of that early 2000s zap in your IPA, give this shot.

The Fisher Brewing guys hand-package every one of these big 750 milliliter cans, and you won't find them anywhere but their brewery. Red Rock's restaurant network should have Black Is Beautiful at all of its locations, including Park City. As always, cheers!