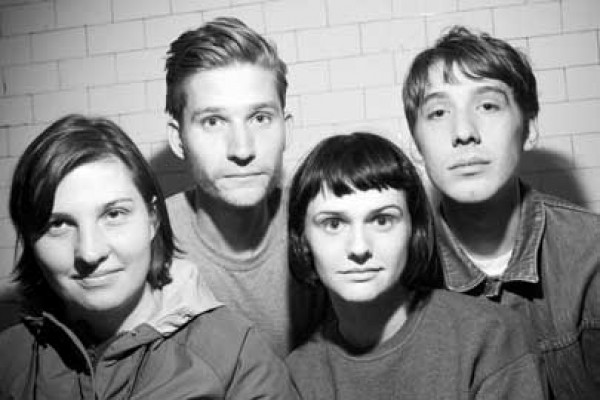 Naming a band can be a tricky process—how do you encapsulate your sound and vision in only a few words? Some band names might follow the time-tested formula of a color paired with a noun, but local four-piece electronic-pop band The Circulars—who released their self-titled debut EP on Sept. 28—drew their name from an unexpected source.

“I had a dream,” says lead vocalist, guitarist and band founder Sam Burton. “For me, band names have always been kind of difficult. … Someone asked me in the dream what my band was named, and it was The Circulars. And I just kept it.”

Over rooibos tea at The Rose Establishment, where Burton and keyboardist Maxwell Ijams are both employed, the band members laugh about how their name was initially received. “People made fun of us for it for a while,” Burton says. Deciding that the word “circulars” would refer to a widely distributed newspaper or flier—“like your weekly circulars,” he says—not the angle-less shape, “I just went with it. It seemed right.”

Happening upon the perfect band name hasn’t been the only lucky coincidence in the formation of The Circulars; Burton also happened to find the perfect people to build the lineup. He met Ijams at a Starbucks, and the two of them found common interests in music and the work of Bob Dylan. Complete with drummer Cathy Foy (whom Burton regularly worked with in another project, The Awful Truth) and bassist Dyana Durfee—both baristas—The Circulars officially formed in April.

“It just meshed really well; it was serendipitous,” Durfee says. “And even now, we sit down together and music happens really quickly. It’s a really productive environment between the four of us, I feel.”

Burton says that the harmonious union between the band members “has something to do with why we click musically.” Durfee adds, “We don’t have to map out like, ‘This is the genre we want to try and re-create, this is the feel we want to have.’ It comes very naturally.”

It could have been easy for The Circulars to put an exorbitant amount of pressure on themselves in anticipation of the release of their debut album. Instead, they think of the EP as documentation of where they were in their progression as a band at the time of its creation—the album’s “a timeline mark, honestly, more than anything,” Burton says—not an end-all definition of their style and direction.

“Our full-length, I think, will be more of a definitive statement for the band. ... This is six songs, this is what we started as,” he says. “We’re continuing to write, but this is a new band. And so … we’re going to make this a chapter, and then focus the rest of our energy on the next one.”

Recorded live in only three hours due to budget constraints, the album—released digitally through Plastic Arts Records—is nevertheless a moody jewel, with an ’80s alt-rock leaning that might remind listeners of The Cure’s Disintegration, especially on tracks “My Friend” and “Spent Our Wisdom.” Ijams’ chilly keys are counterbalanced effectively with Burton’s warm, hypnotic electric guitar, and Durfee’s bass and Foy’s drumming tightly weave it all together with a beat that’s often easy to dance to. The result is full and rich, but without any unnecessary fluff, and that minimalism is integral to The Circulars’ sound, as well as their creative philosophy.

“We’re a very, very minimal band, and we have just only the most basic tools,” Burton says. “We’re not trying to do anything weird ... we’re just working with each other. But we have a lot of emotional push behind the music.”

It’s “minimal in approach, not minimal in sound,” Durfee adds. “There’s a lot of fun, bizarre effects on [the album], but it’s a very focused sentiment that we’re trying to get across.”

At the root of it all is The Circulars’ deep commitment to their craft. “We are just trying to be artists in the purest sense of the word,” Durfee says. “Not to call ourselves artists, but to create art.”