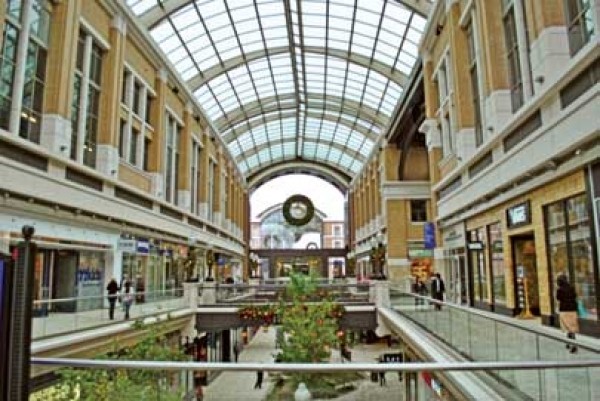 The City Creek shopping center has been open for over nine months in downtown Salt Lake City and has been bringing shoppers in by the droves, unloading full-to-bursting TRAX trains at the 100 South stop and attracting cheesecake addicts from around the state.


But as for whether surrounding retail and restaurants have felt the City Creek effect, the majority of the business owners, managers and representatives whom City Weekly talked to sum up the impact as “meh.”


Some businesses close to the mall say they’ve felt an immediate positive impact, while most in the surrounding blocks say they’ve seen only an increase in foot traffic and window shoppers.


“City Creek is designed for one-stop shopping; it’s designed to keep people in the compound,” says Francis Liong, owner of Lamb’s Grill at 169 S. Main. Lamb’s is a downtown institution but is a block and a half away from City Creek.


“At City Creek, they’ve got 25 restaurants under one roof. Last Saturday night, a family came in and said there was a 2 1/2 hour wait at Cheesecake Factory,” Liong says with a roll of his eyes.


Businesses closer to the mall, however, have fared better. Eric Gilzean, owner of Edinburgh Scottish Castle Imports at 124 S. Main, says that since City Creek opened, Saturday has become a busy day for his store, which offers kilts, kilt rentals, clan crests and other trinkets and goods of the Scottish Highlands.


“You don’t spend $2 billion without it having an impact,” Gilzean says, referring to the LDS Church’s massive investment in the City Creek project.


Caffé Molise is located at 55 W. 100 South, directly across the street from the west block of City Creek, but Kendra Russo, who has worked at the cafe as a hostess since before the opening of City Creek, says the business hasn’t seen many more customers trickling down from the mall.


“We weren’t quite sure what to expect—if it would be a little bit or a lot more busy—and honestly, it’s only a little bit [busier],” Russo says. “They got the food court, and people only see us if they come out this entrance.”


According to a Downtown Alliance survey from August conducted among shoppers who had come downtown in the six months prior, 45 percent said they had shopped or dined at a downtown location other than City Creek. It’s an encouraging sign, but a number of businesses—especially those outside of the City Creek block between South Temple and 100 South—still say it still hasn’t translated into a noticeable uptick in business.


Ebu Fall, the owner of Twisted Roots, an emporium of all things reggae located at 156 S. Main, says he’s seen an increase in foot traffic—passing by his store on the way to City Creek.


“They’ll stop and check us out, but we are not their destination. They are going that way,” Fall says, pointing north. “By the time they get back here, they’ve spent all their money.”


Kimberly Southam of the Southam Gallery at 152 S. Main, which just celebrated its 30th anniversary in Salt Lake City, echoes Fall’s assessment. She sees more foot traffic but not enough of it, and worries that shoppers from outside the city don’t really embrace a pedestrian shopping experience, favoring businesses with convenient parking over exploratory city jaunts.


“We need a little bit more of a New York [mindset],” considering the array of eclectic independent businesses in Salt Lake City, Southam says. While she’s seen swarms of people around City Creek, she hasn’t seen many venture farther out into the city.


The lackluster business for the independent shops and restaurants in the orbit of City Creek begs the question of what, if anything, should be done about it.


“We tried to build on the synergy of the opening of the mall by giving RDA loans to people on Main Street,” says City Councilman Luke Garrott, whose 4th District covers downtown. He points out that the Chalk Garden Co-Op, which has thrived since opening on the same block as City Creek, received an RDA loan for its space, which includes women’s clothing, Lunatic Fringe hair salon, a spa and Lanny Barnard Gallery in its 74 S. Main location.


Garrott says that it’s hard to qualify the business climate for independent businesses, arguing that “there are as many different stories as there are businesses.” It’s difficult to compare a totally enclosed mall like City Creek with the many smaller, disparate businesses, each with separate client bases, business needs, budgets, locations, etc., he says.


Jason Mathis, director of the Downtown Alliance, says the smaller businesses suffer mainly because they lack the advertising resources that City Creek has. He says the Downtown Merchants Association is floating an idea for a cooperative group of small downtown businesses, City Creek and The Gateway mall to pool resources for joint advertising. While the Downtown Alliance is offering administrative support to the merchants association, Mathis says that so far, smaller businesses have not been willing to contribute funds for a joint advertising project.


“Small businesses have to have at least a little bit of skin in the game,” Mathis says. “But it’s a fairly disparate group that doesn’t have a lot of resources to do that kind of advertising. There’s definitely a need for it, but there’s a question of people stepping up and making that happen.”


Garrott says one way the city is helping is by assisting the funding of community business districts as part of an initiative first launched in 2009. One local shop owner, Pam O’Mara, founder of the Utah Artist Hands Gallery at 61 W. 100 South, is working toward that exact goal.


“This will be the first holiday in five years without construction, so I’m hoping that I see a difference,” O’Mara says. “Because, so far, I don’t feel like people are going out of the mall and seeing all of the wonderful things that there are to see in the city.” O’Mara has even set up a website, CityArtsAndIndie.biz, to promote small downtown independent businesses.


For Garrott, improving downtown through neighborhood business districts, as well as weighing the impact of the planned Broadway-style performing-arts center, provide for more optimism for the vitality of the city’s core.


“Downtown Salt Lake will continue to see a rise in value, and City Creek is a piece of that, certainly, but not an instant fix,” he says.