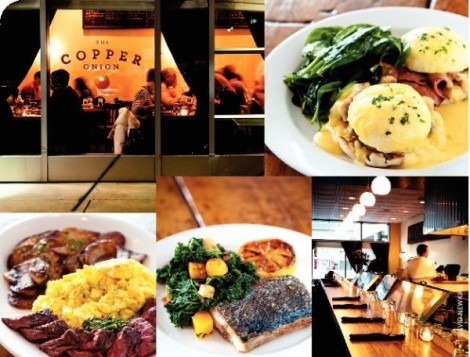 Once in a while, though not often, I come across a restaurant that sparkles and shines so brightly that it actually makes my job difficult. Difficult, because it’s a challenge to do justice to all that is right in a single column. The Copper Onion—a new, gleaming gem of the downtown dining scene—is one such restaurant.

I admit to being biased toward the scale of places like The Copper Onion. It’s not an in-your-face, flashy eatery. Rather, this is an attractive, modest enterprise, independently owned, along the lines of Eva, Pago, Forage, Meditrina and such. You won’t necessarily be bowled over by the design or decor—although, as I say, it is a very visually appealing restaurant and a comfortable one. You will be bowled over by the food. After five visits, that’s something I’m certain of.

Ryan and Colleen Lowder are the owners of The Copper Onion, which opened in sync with the Sundance Film Festival—a smart move, given that the restaurant sits adjacent to the Broadway Centre Cinemas. Ryan runs the kitchen and Colleen manages the front of the house. Together—and again, this has to do with the scale of the restaurant—they can view what’s going on at every table and counter seat, which helps assure quality control. Ryan watches virtually every plate go out from the exhibition kitchen, and Colleen patrols the dining room with an eagle eye. Servers like Clint and Johanna are sharp and professional, yet casual and friendly.

Come to The Copper Onion for a big meal or a small bite. The menu is set up to accommodate any size appetite. You could, for example, share a quartino (small carafe) of wine and a sampling of cured meats and cheeses and call it a night. If you do, be sure to order the sensuous gran biscotto (the creme de la cr%uFFFDme of cured hams) and decadent, French double-cream d’affinois (cow’s milk cheese). Or, perhaps, enjoy a bowl of Lowder’s uber-peppery steamed mussels ($12) with toast points. This dish replaces the mussels with chili and basil that were featured upon the restaurant’s opening. One day, I stopped in for lunch and Chef Lowder asked me if I liked black pepper. “I love black pepper,” I replied; it’s almost impossible for me to get too much of it. So, he tested out his new mussels dish on me and hit a home run: Lots and lots of black pepper add plenty of snap to the creamy mussels’ sauce. It’s delicious.

Another fantastic small plate is the ricotta dumplings ($9). Warning: These suckers are highly addictive. Lowder forms the dumplings by combining his own fresh ricotta, eggs, parmesan cheese, flour, nutmeg and spinach. He rests them on semolina overnight, and then they’re sautéed in brown butter and tossed with parmesan. The result is light, luscious pillows of ricotta greatness.

Although he doesn’t wear it on his sleeve, Chef Lowder has a highfalutin pedigree. Originally from Salt Lake City, Lowder discovered his passion for cooking in Portland, Ore., before moving on to attend the Culinary Institute of America and cook at restaurants including Jean-Georges, Mario Batali’s Casa Mono and Mercat restaurants in New York City, as well as the Michelin-starred El Raco D’En Freixa in Barcelona. Not to be outdone, Colleen Lowder worked at New York’s posh Four Seasons Restaurant, and also managed the renowned Grand Central Oyster Bar. Any food enthusiast should be thrilled that the Lowders have chosen to make their gastronomic stand here in Utah. I know I am. After tasting multiple entrees, starters and sides at The Copper Onion, there’s only a single one that I didn’t love— but, more about that later.

The wine list is small, but filled with well-chosen, food-friendly wines. A glass ($6) of Li Veli Passamante pairs nicely with a hearty bowl of thick, homemade pappardelle noodles tossed in a Berkshire pork ragout and ricotta ($10). Accompanying this Bolognese-style pasta dish for lunch, I chose a side of Brussels sprouts, which were just awesome. Lowder simply shaves the sprouts thinly, then tosses them in olive oil on a super-hot grill and finishes them with garlic and lemon. It’s deviously simple, but superb. Other interesting sides include roasted cauliflower with anchovy cream and capers, snap peas with horseradish and garlic, and “thrice-cooked” fries. It’s those fries that were the only flaw in my otherwise divine meals at The Copper Onion. I just don’t like big, thick, wedge-cut fries, even if they’re cooked three times. You might, however; tastes vary. I’m just a skinny-fry guy.

I love pasta Carbonara, but it’s rarely made in restaurants here the way it ought to be, with a raw egg yolk on top to mix into the warm pasta. The Copper Onion serves the real deal: al dente house-made fettuccine bathed in a creamy sauce with Niman Ranch smoked bacon and raw egg yolk ($9). Another winner is housemade merguez sausage, served atop a vibrant green basil-thyme puree ($8), which I enjoyed with Four Bears Cabernet ($6).

The tombo tuna ($18) entrée is superb: a thick filet of high-quality tombo, rapidly sautéed on a fiery griddle—just to the done side of rare—and served with burnt lemon, kale, julienned Niman Ranch bacon and root veggies. Equally impressive is The Copper Onion’s way with trout. The large, skin-on Utah trout filet is topped with a fascinating and (deliciously) unexpected mélange of grilled lemon, shaved fennel salad, olive tapenade and chili oil ($16)—just killer.

Simply put, restaurants like The Copper Onion remind me how much I love my job.