The Curious Case of the Peculiar Recorder

Gary Ott has always been odd, but how odd is too odd to be an elected leader? 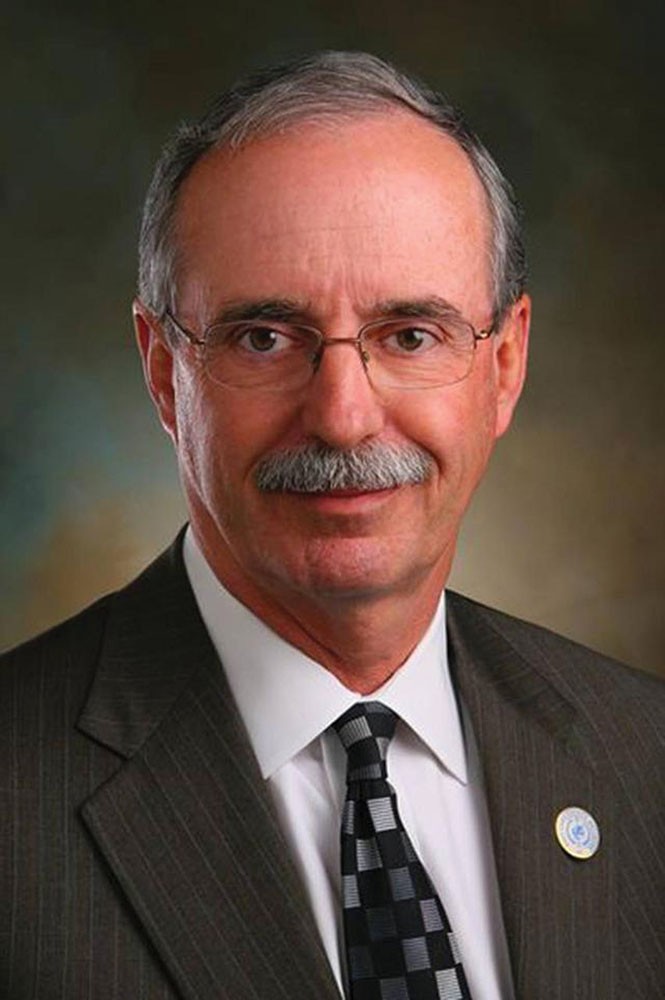 The joke goes that Gary Ott, Salt Lake County's elected recorder since 2002, misspelled his last name on the navy blue-and-yellow (think University of Michigan) lawn signs that bore his name. More like Gary "Odd," some who know the man would say.

This story, says Julie Dole, the county's deputy chief recorder and Ott's right-hand in the office, is one of her boss' favorites. That's just Gary, Dole says, an "odd guy."

"Anybody that knows Gary, [thinks] he's odd," Dole says. "He's not just your normal guy. He does things differently."

Dole's characterization of Ott arrives amid accusations from some county employees that the four-term county recorder is suffering from some type of ailment, which, according to some, was registering well before he won reelection to a six-year term in 2014, and is now spurring questions about the man's ability to do his job.

Over the past couple of years, Ray Lancaster, a veteran county employee who is president of the Utah Alliance of Government Employees union, says, among other instances of odd behavior, Ott has forgotten where his office is located and wondered why employees who haven't worked for him for years are not at their desks. And in January, Ott's behavior took a dangerous turn when a Grantsville Police officer found him wandering around the west desert in freezing temperatures. His car was found nearby, out of gas with a dead battery and a Smith & Wesson handgun in the glove box.

Beyond simply being a bit odd, Dole and Kenneth Richmond, a division administrator in the Recorder's Office who has worked with Ott for nearly two decades, both insist that nothing is wrong with their boss. "He's the same guy I've always worked with," Richmond says. "He's slowing down, he's getting older; we're all doing that."

While questions surrounding Ott's abilities only recently surfaced, his political opponent in 2014 and other county employees say concerns surrounding his behavior trace back years, prior to his most recent re-election, in which he won 118,531 votes, beating his Democratic challenger, Mary Bishop, by 8 percentage points.

But as an elected official, Ott's job, at which his annual salary is $144,600, with $35,000 in benefits, is secure. No state statutes afford any way for Ott to be ousted due to health issues. Mark Thomas, the state's director of elections, says that candidates can be impeached if there is criminal wrongdoing, but for health purposes, removing a candidate from office would be a sensitive and difficult process.

"Trying to judge someone's ability to be in elected office based upon their medical or perceived medical procedures is a very tricky, sensitive, issue," Thomas says. "There's not anything in the statute, and I can understand why."

If Ott, a Republican, began to show signs of wear and tear prior to the 2014 election (Dole said Ott was in meetings and not available for an interview), then questions remain about whose responsibility it is to discourage candidates from running in the event they aren't fit for the job. And in Utah's caucus/convention system, where primary election runoffs against candidates from the same party are about as common as a cat that walks on two legs, incumbents almost always find their names on the general election ballot, and they almost always win.

Bishop says she was made aware that there were concerns with Ott's performance at the office, and his lack of presence during the campaign raised eyebrows. But like any scenario dealing with one's potential health problems and the speculative nature of the situation, Bishop decided against making it a campaign issue.

"When we looked at the issue, we would have loved to have said something, but what can you say?" Bishop says. "We just couldn't see where we could do anything."

Lancaster says that Ott failed to show at a union-sponsored meet-the-candidates night. Appearing in lieu for Ott, Lancaster says, was Karmen Sanone, Ott's secretary, who has been identified in other media reports as having a personal relationship with her boss.

Lancaster says Sanone told her that evening that Ott was going to try to make it, and so the Q&A with the recorder candidates was held last. But Ott never did appear.

Bishop and others have said Republican Party brass should have been aware of Ott's issues before he sailed through the convention. Had there been a primary bout between Republicans, Bishop says Ott would have been forced to speak to his constituents about his job—a seemingly routine function for a man who had been recorder since 2002, but one that Bishop doubts he could have pulled off.

Although it is a fact that Utah's system affords incumbents a massive advantage when seeking re-election, Utah Democratic Party Chairman Peter Corroon says that it's just as easy to imagine that the hyper-interested delegates attending the convention can sniff out oddities easier than a possibly disinterested electorate.

Even so, Corroon acknowledges that earnest convention challenges are rare, partly because the candidates and party leaders try to pare the numbers down to one candidate before a battle erupts that could spell the word "primary." And if an incumbent candidate hasn't given voters a reason to not pick them, then they're usually picked.

Whether Ott's situation is chalked up to being a flaw in the state's election system, a reminder of the need to pay attention to who is running for office, or simply that the man is "odd," obscures the fact that there might well be someone who is dealing with an issue that needs to be addressed.

Jenny Wilson, an at-large member of the Salt Lake County Council, says she, too, noticed that during the 2014 campaign, Ott was rarely present at candidate events, and that she heard he "wasn't doing well."

"I had noticed that there wasn't a single time that he stood behind the microphone and addressed constituents and voters about any issues related to the Recorder's Office," Wilson says.

Wilson says she's willing to explore folding the Recorder's Office and other more obscure county elected positions, such as the assessor, into the mayor's purview, making the leaders of these departments appointed positions rather than elected.

Either way, she wonders who is looking out for Ott. "Unfortunately, in this situation, the people that seem to be closest to Gary Ott are also working with him in his own office," she says.

While speculation surrounding Ott abounds, Dole indicates that the Recorder's Office, and the man who has been at its helm for the past 14 years, are firing on all cylinders.

Dole says that she has never seen Ott and Sanone engage in any activities that would indicate that they are in a relationship, and she denies that the pair is engaged. During the campaign, Dole says Ott was busy and had too many events to attend. When this occurred, she would attend a campaign event, Sanone might attend another and Ott would attend where he could.

The controversies surrounding Ott, Dole says, appear to be stoked by people who simply do not know the man—an odd man—to be sure.

"He's always expressed odd behaviors," she says. "If you've known him for all these years, you'd say, 'That's Gary.'"