Nolan stumbles while reaching for transcendence 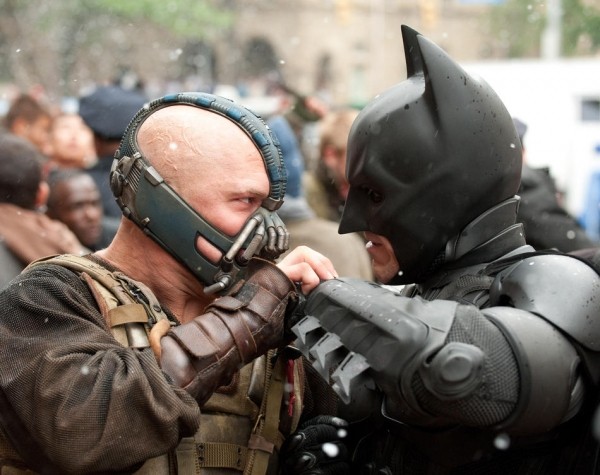 Over the past seven years, Christopher Nolan has been turning the story of a comic-book superhero into an operatic meditation on what it is that can save us from ourselves. And as he approaches the climactic, soaring aria in the final act—The Dark Knight Rises—his voice cracks.


He had to know we’d be listening for every false note, too. Beginning with 2005’s Batman Begins and continuing with the juggernaut of 2008’s The Dark Knight, Nolan had set such a high bar for the realization of a pop blockbuster franchise that we could only expect the latest iteration of genius. The Dark Knight Rises finds Nolan—perhaps to his everlasting credit—embracing that expectation and aiming for an unparalleled crescendo. How much do we penalize him for not quite reaching it?


The screenplay—again by Nolan and his brother Jonathan—sets the action eight years after the events in The Dark Knight, with Bruce Wayne (Christian Bale) now a recluse and Batman vanished entirely after taking the fall for the death of Harvey Dent. Into the long tough-on-crime peace inspired by Dent’s mythology as a fallen hero walks Bane (Tom Hardy), a menacing mercenary who seems intent on carrying out the anarchic plans of his mentor—and Batman’s—Ra’s Al Ghul. And that might just include getting control of the fusion reactor energy source developed by Wayne Industries.


The long view of Nolan’s Batman films has always felt like a contemporary re-imagining of the Biblical “one righteous man of Sodom” tale, with Bruce Wayne/Batman trying to prove himself as the solitary hero whose willingness to take action—and represent the idea that a hero “could be anyone”—makes the corrupt Gotham worth saving. The Dark Knight Rises continues to build on that notion in compelling ways, forcing Wayne to confront his sense of himself and his role as Batman. Yet as ambitious as the psychological underpinnings might be, they don’t make the same thematic sense here that they did in Batman Begins and The Dark Knight, where the villains’ plans—Scarecrow’s fear-inducing chemical agent, or Joker’s “prisoner’s dilemma”-style threat—were built around turning the anxieties of Gotham’s citizens into the agents of its destruction. Here, Bane plants the idea that the terrorized people will tear the city apart, except that the nuclear threat winds up leaving them cowering and almost completely invisible.


That’s only one place where Nolan seems to have built too much stuff into The Dark Knight Rises to bring to reasonable fruition. The cast is stocked with several new characters, including burglar Selina Kyle/Catwoman (Anne Hathaway, impressively shifty), new Bruce Wayne romantic interest Miranda Tate (Marion Cotillard) and young cop John Blake (Joseph Gordon-Levitt). While 164 minutes of running time is enough to make sure that nobody is left completely floundering, the characterizations often feel rushed, their various connections to Batman either not given room to breathe or requiring too much expository down time. As a result, the film starts to feel cluttered, an epic without the clean, powerful through-line that keeps it centered.


And yet, for all its small stumbles, The Dark Knight Rises still feels so powerfully consequential that it’s almost always gripping in the moment. Contrary to preposterously perpetuated notions that the film is an Occupy-approved broadside against conservatism, the film actually wrestles with how easy it is to demagogue issues of financial inequity, or ideology-driven deceptions by people in power. Hans Zimmer’s percussive score drives the action like a steadily increasing pulse rate, and Nolan’s ongoing improvement as a director of set pieces gives the central confrontations—including a brutal slugfest between Bane and Batman—a visceral intensity. Racing against a countdown clock may be nobody’s idea of revolutionary adventure filmmaking, but it generally works, even as we know it’s ultimately about more than whether all the flashing red numbers will get to zero.


It seems petty to feel ambivalent about a film that flirts with transcendence and fails, while so many big-budget contemporaries are content to throw 3-D distractions at an audience. Christopher Nolan is a filmmaker who virtually guarantees that his work will never be simple, never lazy, never obvious. The Dark Knight Rises isn’t a game-changer, nor is it merely a game. It’s a film with so much it wants to say that the words sometimes collide. That single, dramatic aria Nolan might have aimed for instead becomes a chorus, the voices sometimes converging in glorious harmony, at other times veering into cacophony.