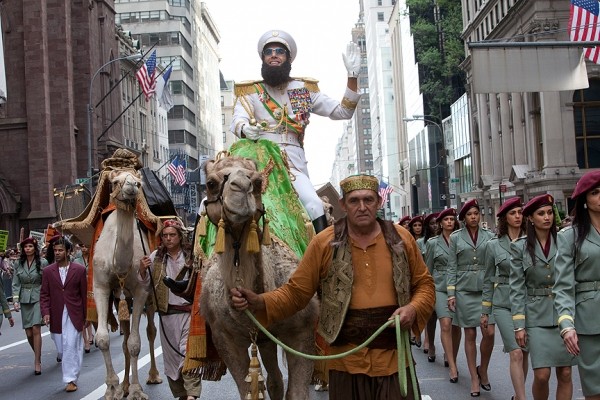 With The Dictator, Sacha Baron Cohen finds himself addressing a situation no entertainer wants to confront: What do you do when the shtick that was your bread & butter just can’t work anymore?


Borat was, after all, a minor masterpiece of comedic filmmaking, combining Cohen’s sensibility as anarchic, gleefully offensive social satirist with faux-documentary style in something that emerged as Candid Camera by way of South Park. But by the time he was ready for his follow-up, BrÃ¼no, it was already clear that Cohen wasn’t going to be able to sneak up on people anymore. Sure, he could find plenty of work for hire as a gifted comic actor in stuff like Hugo, or more Madagascar voiceovers. But for his own original creations, he was going to have to find a new, Punk’d-free delivery system—and based on 2002’s Ali G Indahouse, that was far from a sure thing.


The Dictator eases us into a more conventional comedy setting for Cohen with a biography of General Aladeen (Cohen)—the capriciously iron-fisted ruler of the North African country of Wadiya who inherited his rule from his father—courtesy fake TV-news footage. Wadiya is facing potential international military action in response to its weapons program, requiring Aladeen to address the United Nations in New York City. There, his uncle (Ben Kingsley) arranges to have Aladeen executed and replaced by an easily manipulated double who will—much to Aladeen’s horror—sign a new constitution making Wadiya a democracy, albeit one that will make his uncle very rich.


Aladeen, of course, manages to escape, and wanders into the wilds of New York City, shaven and unrecognizable as a reviled despot. For most comedians, this would be the cue for the tamest of fish-out-of-water humor, but Cohen—working again with his Borat and BrÃ¼no director Larry Charles—attacks the concept with his characteristic refusal to find anything sacred. Aladeen’s encounter with Zoey (Anna Faris)—the aggressively progressive owner of a “vegan feminist” grocery store who was protesting against Aladeen’s policies—turns into a hilarious skewering both of granola-lefty stereotypes and Aladeen’s inability to deal with a diverse world. Never at a loss for women to pleasure him—his photo “Wall of Fame” includes Lindsay Lohan and Oprah Winfrey among his conquests—Aladeen learns for the first time how to, um, handle his own business. And when the conversation between Aladeen and his expatriate nuclear-program chief (Jason Mantzoukas) aboard a tourist helicopter is misunderstood to be a terrorist plot, it’s in a manner more scathing than the trailer snippet hints at.


Along the way, Cohen is almost certain to offend somebody, in ways that American film comedy is almost never prepared to attempt. Sure, there’s stuff that’s simply outrageous, like Aladeen’s impromptu act of midwifery that turns a birthing vagina into an occasion for a romantic interlude. But this is also a guy who won’t shy away from courting gasps when Aladeen plays the “Munich Olympics” module on Wii Terrorist, or turning a culture’s devaluation of female babies into a punch line. It all comes to a glorious climax when Aladeen gives a speech about why America doesn’t understand the beneficial aspects of a dictatorship, rattling off uncomfortable truths about things you would never see in a democracy in a manner that’s magnificently pointed. If you’re not folding your arms in disgust at Cohen’s views, you’ll be howling with laughter at his ability to puncture America’s sense of moral superiority.


Inevitably, some of the gags fall flat, and the stretch of The Dictator that takes place before Aladeen gets to New York City isn’t nearly as inspired. But it’s hard to resist the goofy brilliance behind a movie that sets the lonely urban wanderings of its protagonist to the clichéd tune of REM’s “Everybody Hurts”—except with lyrics sung in a foreign tongue. Or that casts John C. Reilly as a covert operative embarrassed by his obsolete torture equipment. Cohen proves that he doesn’t need unwitting suckers to make his comedy work. He just needs an audience willing to laugh at liberals, zealots, racists, assassinations, political persecution, abortion and the idea that every male celebrity has his price for a little gay sex with a Chinese diplomat. You know who you are.