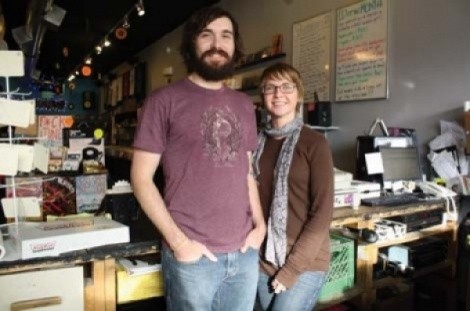 Anna and Chris Brozek arrived in Salt Lake City five years ago, moving to town specifically to open Slowtrain music store. In the time since, they’ve expanded their store’s offerings, hosted countless memorable live performances, created their own record label and become a major part of the Salt Lake City music community. Now, with a daughter named Iris set to arrive any time, they’re closing Slowtrain to embark on a new chapter in their family’s life. Anna talks about why the time is right to move on, after a sale to unload everything in the store beginning Nov. 8.

Why is Slowtrain closing?
Slowtrain is closing not because the record store can’t survive in Salt Lake City. We’re actually doing really well right now. We’re closing because Chris and I have made a personal decision that we would rather spend our time and energy being parents rather than business owners. Slowtrain takes a lot of time. It’s amazing and wonderful, but it takes a lot of time.

Were there people pretty serious about buying the shop, and what options did you consider?
Over the last year, we looked at the possibility of us keeping it and letting the staff run it, but we decided that we are still so emotionally invested in the store that there was just no letting go. It’s all or nothing with us. The next step was to try and find someone to buy it who would carry on our legacy, and even improve it, breathing new energy into the store. We had lots of interested buyers. Our first fell through in September, so we opened up to all our customers and the public, letting them know to contact us if they were interested. I think the major problem with that is that people either didn’t have the time to invest in it—because it does take a lot of time and energy—and the people who had that, they couldn’t get the funding in time.

The store has basically been you and Chris and some part-time help, right?
Yeah, it really was like our first child, and it probably taught us a lot about what we’re about to experience. It needs a lot of tender love and specialized attention. We’ve been lucky with Matt (Hoenes) and Vanessa (Wardy) helping us out, and some others along the way. It’s hard for us to let go of that.

What was particularly rewarding about this experience the past five years?
We did move here just to open the store, and it hasn’t paid us well, but it paid our employees and it paid our bills and we’re still open. Really, the most rewarding thing about it—and I’m hormonal, so I hope I don’t get teary when I talk about it—has really been relationships and friendships we’ve gained from the store, and the people we’ve met. The incredible experiences we’ve had that never would have crossed our paths had we not opened this record store. We got to shake David Byrne’s hand, and he knew who we were, saying, “You guys are the record-store owners,” which was amazing. Chris was a typical ’80s-born teenage boy who grew up learning to play guitar by listening to Pearl Jam, and we got a shout-out from Eddie Vedder onstage when they were in Salt Lake City. Things like that were just unbelievable, and I can’t wait to share them with our daughter.

Then you can talk about the friendships—friendships we have from out of town, musicians and tour managers and people in the industry. Some of our favorite bands are friends now. And in town, everyone we know in Salt Lake City is from this record store! What more can you say?

What’s the immediate future look like?
We’ve both been working part-time [outside the store] since the store opened. So Chris went into the stereotypical dad mode almost immediately when we found out we were pregnant and started working as much as he could at his other job because that job actually paid. He’s actually officially transitioned into a full-time job there at the post office. And I’ll still work part-time for the Junior League of Salt Lake City. … We’ve already sort of transitioned into that. I can’t remember the last time Chris set foot in the store.

What is the plan and the timing for closing down?
We’re going to close for a week in November and reopen the store Nov. 8. Initially, everything in the store will be 30 percent to 50 percent off—30 percent off music and 50 percent off non-music items. And everything will be for sale, from light fixtures to CD racks and show posters. We’re pulling out everything, and as we get closer to closing, we’ll keep lowering prices. My plan is to be open through Dec. 24, and then close so we’ll have the last week of December to get everything out of here. Slowtrain will be done by the end of the year.

Was there something that might have been different—like making 20 percent more a month or something else—that would have convinced you to stay, or to keep the store going?
Slowtrain had never been about money for us. I’m sure there’s probably a number out there where we would have said, “Well of course we’re going to keep it open!” But I don’t know what that number would have been. It’s really such an emotional investment for both of us. I don’t if people realize how much every comment and remark wears on us. There’s always something, and you try to smile through it and say, “I’m sorry we don’t have that album you’re looking for, I’m happy to special order it, but dude, there’s like 5 million records out there! We can’t possibly carry them all.” And even though I know people don’t intend to be mean, every little thing wears on you. I’m pretty big on personal boundaries and being in control of where we are emotionally in our lives, in general, so it seemed really important to me to be able to say, “I love Slowtrain and I love what it is, but what it takes from me is something I want to give to my daughter.” The kind of patience and energy that it takes for me to take those little comments and still power through and provide this service for the Salt Lake community, that energy and emotion I felt needed to be directed a different way. And I can’t imagine doing both.