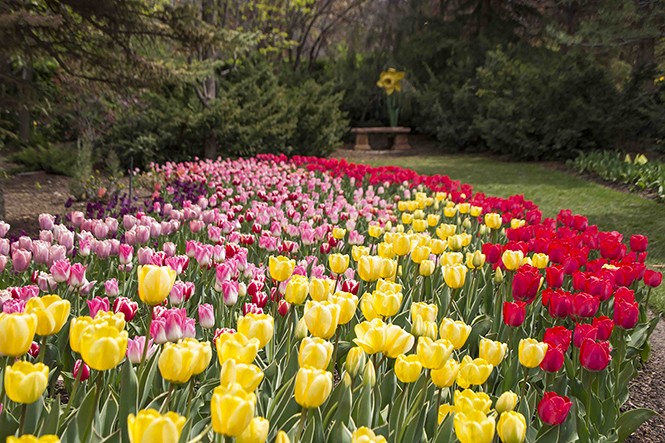 THURSDAY 4/19
Thanksgiving Point Tulip Festival
Nothing says spring quite like 55 acres sprouting almost 300,000 tulips of more than 100 unique varieties. Tulips are real-world phoenixes: If cared for correctly, they can re-bloom season after season, espousing living history and soon-to-awaken potential.

At Thanksgiving Point's 14th annual Tulip Festival, tulips from as long ago as 1595 are featured in an Antique Tulip Area. Given personal care the rest of the year from the Hortus Bulborum—a living museum in Limmen, Noord-Holland—these bulbs have been planted and replanted in a continuous stream of life and rebirth.

The festival runs through May 5 in Thanksgiving Point's Ashton Gardens. Aside from ancient tulips, the festival also provides attendees the chance to wander through sections of tulip-filled gardens devoted to themes like "Tulip Riot," "Tulip Fashion Show," "Italian Gardens" and, for the bibliophiles out there, the "Secret Garden," to name a few.

Dutch traditions—as well as scavenger hunts, weekly vendor and food truck markets, dancing and more—are also part of the agenda. On the festival's final day, events culminate with a 7:30 p.m. concert by the American Heritage Lyceum Orchestra, which is included in the price of the day's admission. Once the event concludes, attendees can take a floral souvenir home with them, with the formerly planted tulip bulbs sold at $4 per dozen, to rise again in gardens all across Utah. (Casey Koldewyn)

"Contemporary dance is really the evolution of ballet and modern dance," Nielsen says. "We have companies that do classic work, and that will always be there. It's classic, it's foundational and it's what our dancers train in on a daily basis. What we have needed is contemporary."

SALT marks the conclusion of its fifth anniversary season providing that contemporary flavor with an eclectic program of world-premiere choreography. Among those is a new work by celebrated Spanish choreographer Gustavo Ramírez Sansano, and bringing him to Utah involved a two-year process of fund-raising. His piece, set to pop music, includes among its components a sequence where two dancers attempt to lower an orange to the ground with their bodies.

That's exactly the kind of work Nielsen is thinking of when she describes SALT's mission to collect and showcase the most innovative voices in the field. "We want Utah audiences to have a front-row seat for what is on the cusp of the field globally," Nielsen says. "Who are the buzz artists: Have you seen that? Have you seen what they're doing? ... I want the theme of the show to feel like it's 'I haven't seen that before.' Things people are going to be surprised by, and excited about." (Scott Renshaw)

FRIDAY 4/20
Pygmalion Theatre Co.: Red Bike
When Pygmalion Theatre Co. artistic director Frances Pruyn got the opportunity to be part of the rolling world premiere of Red Bike, she knew the play's unusual format would be well worth the challenge. The bones of the script are written in tight poetic verses, so the flesh and stage direction of the play are left largely to the director and crew.

"I said to myself, 'I must do this show,' because I see it as such an interdisciplinary piece of theater," Pruyn says. "It's storytelling through the device of not only the epic poem that it is, but also through music, movement, drumming and shadows that are all used to forward the plot."

Since the interior landscape of the story is so abstract, she needed to find a special kind of cast that could work with her as a team to create a unique interpretive vision. "I chose my cast for their ability to work together as an ensemble and because they weren't married to traditional stage methodologies," Pruyn says. "I needed actors that could play!"

In this twisted vision of the American Dream, even the titular red bike itself becomes a silent character, and so can your own—whatever color it might be. Working together with the SLC Bicycle Collective, if you bring a bike to the show for donation, it will become a special set piece for the night, you'll get $5 off your ticket price and you just might make someone else's American Dream a little better. (Samantha Herzog)

TUESDAY 4/24
Jeff Benedict: Tiger Woods
As Jeff Benedict—co-author with Armen Keteyian of Tiger Woods, a tell-all book about the rise and rapid fall of the enigmatic golfing icon—points out, there are only a handful of celebrities known by one name: Elvis, Prince, Madonna. But in the sports world, Tiger Woods—make that "Tiger"—remains one of the most readily recognized individuals on the planet. Mickey Mantle, Mohamed Ali and Michael Jordan were sports heroes of legendary proportion, but few athletes scaled higher heights, or suffered more humiliating disgrace, than that which marked Tiger's career.

Benedict calls Tiger's decline the steepest and swiftest in sports history. At one point, Tiger was among the wealthiest individuals in professional sports, worth an estimated $1 billion. He was admired and inspiring, causing the biggest corporations to clamor for him and beg for his endorsements. However, his sudden downfall in November 2009—a perfect storm resulting from an infidelity scandal, sex addiction, prescription drug dependency, divorce and an arrest for DUI—turned that image upside-down, costing him millions and threatening his career.

Which makes his comeback in recent months all the more remarkable. "It's so much more than a sports story," Benedict says. "Tiger's return is a human-interest story. His vulnerabilities have finally made him relatable. There is nothing quite as compelling as redemption."

Or, hearing the author share his Tiger tale from a personal perspective. In literary circles, this is the equivalent of a hole in one. (Lee Zimmerman)