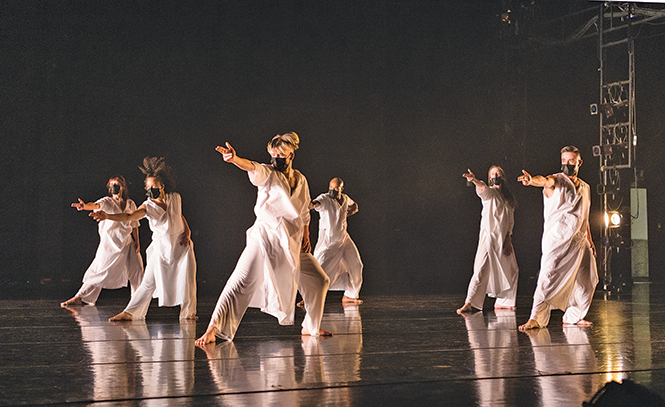 Ririe-Woodbury Dance Co.: Cadence
A unique mix of pieces—two of them originally planned for live performance last spring, and one created during the past year specifically for online presentation—came together for Ririe-Woodbury's Cadence virtual production in a way artistic director Daniel Charon didn't quite plan for. "This show wasn't conceived with a thematic through line, but one emerged through the process," Charon says. "[Choreographer Charles O. Anderson] spoke so much about howleveraging individuality can serve a collective solidarity––how what makes us all the same is our striving to be individuals. I think that there are moments of this that emerge in all of the dances on the program intheir own unique ways."

Anderson's Rites marks the program's original commissioned work from 2020, a dance theater piece loosely inspired by the writings of James Baldwin. According to Charon, "We filmed [Rites] onstage with multiple angles that go far beyond a traditional archival filming of the work. [Anderson] has also envisioned additional overlays of footage that consist of pre-made imagery, like photos and pre-recorded video, to be added as semi-transparent layers over the filmed dance." Joining Rites on the program are two works that had been scheduled for performance in 2020: an abridged version of Yin Yue's In the Moment Somehow Secluded, and Utah native Andrea Miller's joyous I can see myself (formerly Pupil Suite).

Cadence premieres on demand at ririewoodbury.com on April 22 at noon, running through May 22. Tickets are $18, available via overture.plus/patron/Ririe-Woodbury-Dance-Company. A free opening night virtual reception takes place April 22 at 6 p.m. (Scott Renshaw)

Dr. Mae Jemison @ NHMU online
The word "pioneer" gets thrown around a lot nowadays—and certainly has its own particular connotation in Utah—but it's hard to deny that Dr. Mae Jemison deserves the designation. After all, Dr. Jemison—an engineer and Peace Corps physician who joined NASA in 1987—became the first Black woman in space when she served as a mission specialist aboard the space shuttle Endeavor for an eight-day mission in September 1992. And after retiring from NASA duty, she founded her own technology company, became a writer of children's books and earned the reins of the 100 Year Starship project directed toward developing the capacity for interstellar travel within a century.

As keynote speaker of the Natural History Museum of Utah's "Trailblazing Women in Science" series, Dr. Jemison will speak about the 100 Year Starship project, and how the initiative pushes for radical leaps in technologies and systems across a wide range of disciplines. It's a chance to learn how space exploration remains an important vector for innovation and discovery, despite seeming more removed from daily life and less groundbreaking than it did in earlier generations. The presentation will also address how interdisciplinary approaches combining social sciences and art with the "hard sciences" helps foster innovation, and—as the first real astronaut to appear on a Star Trek series—how speculative fiction tends to shape our vision for what is possible in the future.

Dr. Jemison's virtual presentation is offered Thursday, April 22 at 6:30 p.m. The event is free, but registration is required at nhmu.utah.edu/2021-lecture-series-registration. (SR) 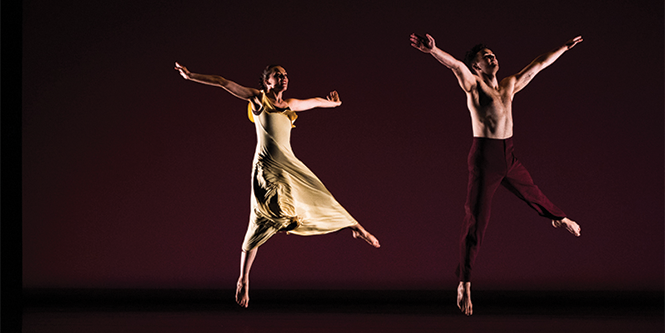 Repertory Dance Theatre: Homage
Since Repertory Dance Theatre is a company dedicated to preserving the history of the dance art form, you might think that a recorded performance would fit right in with that mission—and you'd be right, but only to an extent. According to RDT artistic director Linda C. Smith, it's important to think of a virtual performance like the new production Homage as a supplement to, but not a replacement for, live dance.

"Nothing replaces the impact of seeing dance live in a theater setting, but because of COVID pandemic limitations, we have found that a virtual performance can also offer some supplemental information that can enhance the performance," Smith says. "It also offers RDT the opportunity to present our concert to audiencesoutside of the Rose Wagner Theatre. We have dance students from Connecticut who will be watching Homage."

Homage is made up of four classic works dating back more than six decades: Donald McKayle's 1959 piece Rainbow Round My Shoulder, set on a chain gang in the American South; the 1949 work Invention (pictured) by modern dance pioneer Doris Humphrey; Elizabeth Waters' 1959 Castor & Pollux, inspired by Pueblo Indian rituals; and José Limón's 1958 Suite from Mazurkas. Homage begins streaming Friday, April 23 at 7:30 p.m., with tickets available for $15 at rdtutah.org; viewers will then receive a personalized link that they can view at their leisure. A virtual launch party kicks off the production at 7 p.m. on Friday, April 23 at 7 p.m., including a farewell to retiring dancer Jaclyn Brown. (SR) 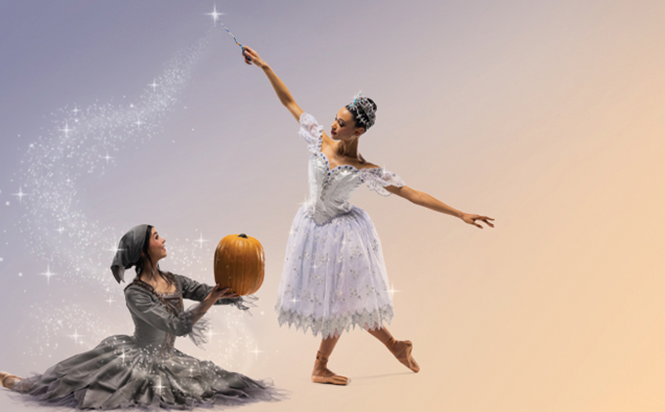 Ballet West II / Ballet West Academy: The Glass Slipper
It's not entirely accurate to think of Ballet West II as simply a "minor leagues" for the primary Ballet West company. While some of its performers do go on to become part of Ballet West, the two-year program is really about education. That idea doesn't apply just to the education of the dancers who participate and receive personalized instruction, but also to education for the entire community, as Ballet West performs around the country as ambassadors for the main company, and (in non-pandemic years) in front of more than 100,000 students and educators annually.

That education component certainly applies to The Glass Slipper, a Ballet West II world premiere of choreographer Pamela Robinson Harris's new take on the classic Cinderella story, featuring students of Ballet West Academy. The familiar magical tale of a poor girl and a handsome prince—in a one-hour, family-friendly presentation full of charm and comedy—is part of the Family Classics Series, featuring a guided narration that allows the youngest audience members to understand more clearly the story that is unfolding on stage. And in a first-ever supplement to this educational offering, one performance of The Glass Slipper will be presented with Spanish translation as well, opening up the experience to an even larger potential audience.

The Glass Slipper plays at the Capitol Theatre (50 W. 200 South, saltlakecountyarts.org) April 23 at 7 p.m. and April 24 at 12 p.m. in English, with the Spanish-language performance April 24 at 5 p.m. Tickets are $25, with limited seating due to reduced capacity. (SR)