THURSDAY 4/25
Kirk Wallace Johnson: The Feather Thief
When Kirk Wallace Johnson first heard about the strange tale of Edwin Rist—the classically trained flute player whose fascination with tying authentic Victorian-era salmon-fishing flies led him to steal priceless tropical bird specimens from a British natural history museum—he had no idea that it would become a multi-year odyssey in which he would become as much a participant as a reporter. "I had a choice," Johnson says. "Do I just write a book that says 'and he got away with it,' or do I decide to channel my own obsession into trying to find these [missing birds] myself?"

Johnson's investigation into what became of these lost specimens—many collected in the 1850s by naturalist Alfred Russel Wallace, a man often lost to history who developed the theory of natural selection at the same time as Charles Darwin—anchors The Feather Thief. The book also explores the history of trade in rare feathers and the contemporary subculture of fly-tying enthusiasts attempting to re-create "recipes" using feathers from endangered species. Yet it might be most compelling as a profile of the author himself, an Iraq War veteran whose frustration working with refugee-relief nonprofit groups transferred into his work on this project.

"By the third or fourth year of this investigation, where I'm now waist-high in the manuscript and I'm wrestling with the conclusion that I may never find these [birds], that's where it began to sink in that I'd kind of backed myself into another unsolvable problem," Johnson says. "There was joy in trying to solve both of those problems, and mixed success on both fronts." (Scott Renshaw)
Kirk Wallace Johnson: The Feather Thief @ The King's English Bookshop, 1511 S. 1500 East, 801-484-9100, April 25, 7 p.m., free, kingsenglish.com

THURSDAY 4/25
Broadway at the Eccles: Disney's Aladdin
In the classic folk tale "One Thousand and One Nights," Aladdin had the power to grant wishes to anyone who freed him from his magic lamp. When Disney turned that timeless yarn into an Oscar-winning animated movie and later a blockbuster Broadway musical, audiences, investors and accountants found their wishes coming true as well. Credit the talents of the Tony and Academy Award-winning songwriters Alan Menken, Howard Ashman and Tim Rice, who between them have been responsible for penning such hit musicals as Beauty and the Beast, Sister Act, Chess, Aida and The Little Mermaid.

Released in 1992, Disney's Aladdin became the highest grossing film of the year, no small achievement for an animated film. After spawning the successful stage version, the musical quickly went on to break box office records and enchant audiences worldwide.

"It's about keeping all the stuff that everyone loves from the movie," Tony-winning director-choreographer Casey Nicholaw writes in an email. "And, in order to get it on stage, giving it a musical-comedy heart."

The stage version includes several Academy Award-winning songs from the film (among them the No. 1 pop hit "A Whole New World") and others written especially for the stage. "Coming to the show is like opening up, in a sense, a treasure trove—or a 'Cave of Wonders,' if you will—of material that was intended for the animated movie," Menken adds. "And it's now being brought to life on stage!" (Lee Zimmerman)
Disney's Aladdin @ Eccles Theatre, 131 S. Main, 801-355-2787, April 25-May 12, dates and times vary, $55-$160, artsaltlake.org

The piece is a conglomeration of two initially separate plays, Round2 and Exposure. Instead of character or story overlap, the two attempt to create a cohesive play across the intermission through themes of connection and disconnection.

Natalia Noble and JayC Stoddard—playwrights for Round2 and Exposure, respectively—say jointly via email, "One of the things the shows really explore, the thematic through-line, is the seductive, and yet false idea of instant connection. This thought that all we have to do is click on some stranger, and make that human connection we all crave. The funny thing is that the reality is quite the opposite."

The performance plays with the idea that while so much has changed in the fields of love and sex, there is much that has remained the same. In order to explore the central themes, attendance at Love and Sex in the Digital Age is limited to audience members who are 18 or older. "Although marketing has been clear that we will be baring our bodies, it's the exposure of the soul of the show that will resonate and stick with them long after the lights have gone out," Noble and Stoddard say. (Casey Koldewyn)
Utah Repertory Theater Co.: Love and Sex in the Digital Age @ Rose Wagner Center, 138 W. 300 South, 801-355-2787, April 25-27, 7:30 p.m.; April 28, 3 p.m., 18+, $10, utahrep.org 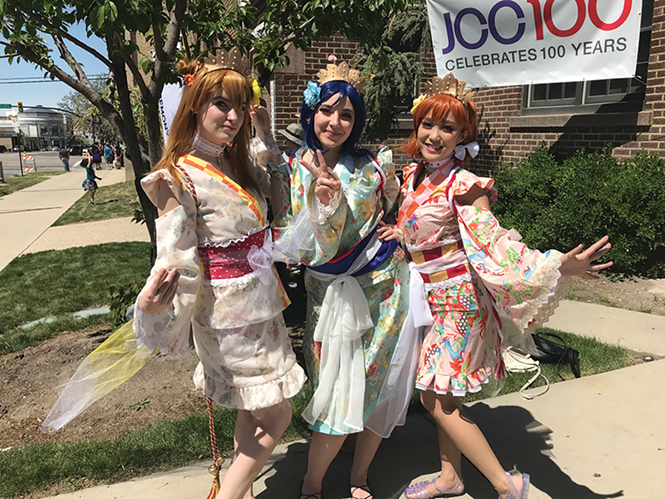 SATURDAY 4/27
Nihon Matsuri Japan Festival
Celebrating a culture rich in history, the annual Nihon Matsuri Japan Festival offers activities for all ages. The event begins with a welcome by the Kenshin Taiko group of the Japanese Church of Christ and highlights Contested Histories, a collection of Japanese historical artifacts presented by the Japanese American National Museum.

Following a discussion, visitors can view a pop-up display including photographs and artwork handmade by Japanese Americans while incarcerated in American internment camps during World War II. In addition, visitors can experience an authentic immersion in Japanese heritage with a kimono fashion show, traditional tea ceremony, noodle-eating contest and the ever-popular cosplay contest. Exploring Japanese culture through anime and manga, the contest is a vibrant showcase of characters, with prizes for best costumes and performances.

A variety of martial-arts groups are scheduled to demonstrate throughout the day, with special guests including Sil Lum Kung Fu Kwoon performing the traditional lion dance and members of the Zen Bu Kan School of Japanese Swordsmanship offering an exciting show. Festival participants since 2005, the award-winning One Voice Children's Choir shares their beautiful harmonies in a one-of-a-kind performance as well. "There will be 60 children in the choir," founder and director Masa Fukuda says. "And we will be performing three or four songs in Japanese, along with recognizable pop songs."

In addition to the entertainment, enjoy a variety of Japanese food and merchandise, along with free activities for kids, including games, face painting and crafts. (Colette A. Finney)
Nihon Matsuri Japan Festival @ Japantown Street (100 South between 200 and 300 West), April 27, 10 a.m.-5 p.m., free parking available at Salt Palace entering from 300 West, nihonmatsuri.com