The Essential A&E Picks for April 26-May 2 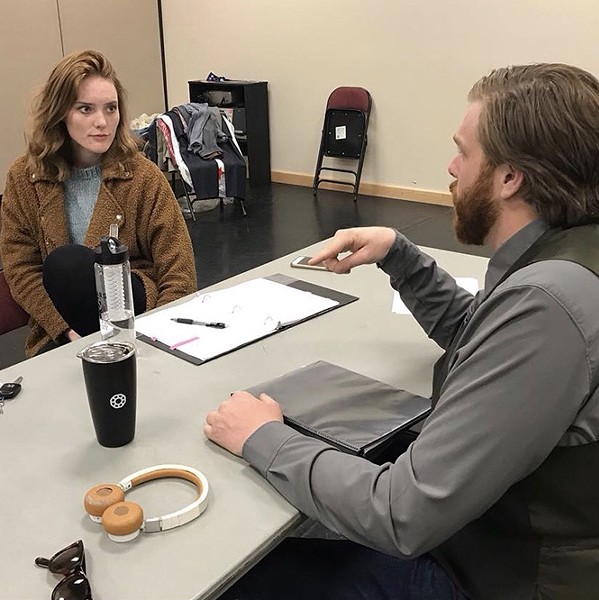 THURSDAY 4/26
Wasatch Theatre Co.: What We're Up Against
It would be great if the adage "what's old is new again" only applied to fun things—like choker necklaces coming back in style—instead of sexism being reinvented for every new generation. What We're Up Against explores sexism's pernicious nature through the story of Eliza, a new architect trying to make a name for herself in a male-dominated workplace. While the play was written by Theresa Rebeck in 1992, this production marks the premiere of a 2017 update.

According to Amanda Caraway, a member of Wasatch Theatre Co.'s board of directors, the company chose to produce the play becauseof the starkly different reactions male and female board members had toward it. "This is a conversation we need to have, because men and women are seeing the exact same thing and coming away with different ideas," Caraway says. "It's a great vehicle for men seeing what women go through, and women seeing that they're not alone."

Director Natalia Noble says she hopes audiences resist categorizing women as heroes and men as villains, and instead push for a broader critique of toxic masculinity. "We need to look at our values system of what is masculine and what is feminine, and why we prize certain traits one over the other," she says. "It's not that easy a fix."

Before each performance, actors will read monologues about local women's experiences with workplace harassment. Women can submit their stories, anonymously or not, towasatchtheatercompany@gmail.com. The company plans to craft the submissions into a new play to be performed in 2020, the centenary of the 19th Amendment. (Kylee Ehmann)

FRIDAY 4/27
Salt Lake Men's Choir: 35 Years and Counting
Things have changed quite a bit for the Salt Lake Men's Choir since the group was formed by 13 people in 1982, according to choir vice-president Justin Hudspeth. "There were a lot of years where there were more members on the stage than audience members," Hudspeth says. "They started out rehearsing in members' homes. It was not always easy."

Such humble beginnings offer even more reason to celebrate more than three decades of entertaining Utah audiences, as the Salt Lake Men's Choir now stands 85 members strong and wraps up its 35th anniversary season with a two-night performance. These concerts celebrate the entire history of the group and the different musical emphasis of different directors, with songs ranging from a brand-new arrangement of John Lennon's "Imagine" to long-time audience favorites like "The Rainbow Connection" and "Over the Rainbow." The latter song has been part of the repertoire for so long, Hudspeth says, that the arrangements used by the group are now out of print.

While the choir has long been associated with the local LGBTQ community, Hudspeth is careful to note that the group is open to all men who love to sing, and currently features several straight members among its ranks; "We always kind of left that door open a little bit," Hudspeth says. Yet it's the commitment of long-time members—including Dale Sheld, who was one of those original 13 in 1982, and 25-year president Leslie Brady—that has made it possible for another generation to be part of the group. Here's to another 35 years of finding their rainbow connections. (Scott Renshaw)

FRIDAY 4/27
Compagnia T.P.O.: Farfalle
The most brilliant dance performances can create quite a spectacle, one where music and movement intertwine, find a common bond and hold audiences in their sway. Compagnia T.P.O. takes that concept several steps further by offering an opportunity to indulge in sights, sounds and sensory embellishment as a total immersive experience.

That's the core of one of the company's signature offerings, Farfalle, which features a pair of expressive dancers moving through a specially designed stage. Colorfully enhanced and expressively illuminated, the unique scenic design provides an imaginative landscape and a cinematic screen that fully integrates video and audio elements into its all-inclusive environment.

The idea, of course, is to stimulate the senses and free the crowd from complacency. The audience is encouraged to be more than onlookers, and to freely explore the stage, interacting with the digital setting and allowing themselves to be stimulated by its sensations. The stimuli are borne from the space itself, and the spontaneity comes about when the third wall between artist and observer is shattered. Each performance is entirely different, wholly original and completely unpredictable. It's an ever-changing dynamic, one that allows all involved to release their inhibitions and move about as they wish, part of a process of interacting with the dancers and the designs at the same time.

Granted, not all of us are as agile as others, but we've been given assurance that Farfalle garners response from even the most timid wallflowers. That suggests to us that T.P.O. is definitely A-OK. (Lee Zimmerman)

SATURDAY 4/28
Nihon Matsuri Japan Festival
The Nihon Matsuri—or, in English, "Japan Festival"—provides an annual chance to learn about and appreciate Japanese culture and tradition. Performances, ceremonies, food and vendors make for a well-rounded event with no shortage of things to do.

The fest hosts two stages alive with everything from Taiko drumming to a Kimono Fashion show featuring the work of designer Sueko Oshimoto (pictured above, center). "She is an award-winning kimono master costume designer from New York, and will be a special addition to our extensive list of Japanese events at this year's Nihon Matsuri," festival committee chairman Irene Linnett says. This year also features historical tea ceremonies and authentic calligraphy to keep you busy.

All this excitement is sure to work up an appetite, and luckily there's an abundance of food. From new and exciting takes on Japanese flavors to traditional home cooking, there's something for everyone (see p. 22 for more on that). When you're done eating, check out the vendors and take home a little piece of Japan just for you.

For years, this festival has been educating the Utah community by sharing Japanese culture and teaching people about local Japanese-American history. The Nihon Matsuri venue is "Japantown" street in the heart of Salt Lake, but the Japanese Church of Christ and Salt Lake Buddhist Temple are all that remain of a once-prominent community in the downtown area. This festival creates an opportunity to bring Utah Japanese-American culture back to the forefront through food, traditional crafts, arts and ceremonies that provide education and entertainment for all ages. (David Miller)