Broadway Across America, Cabaret, The Rose Exposed and more

THURSDAY 8.25
Broadway Across America: Newsies
Adults of a certain age probably have fond memories of the 1992 Disney musical movie Newsies starring a then-relatively unknown Christian Bale. Despite its catchy tunes—namely "The World Will Know," "Seize the Day" and "King of New York"—the plot was a tad thin. The Broadway version, currently on tour, strengthens the story, introduces new characters and adds more substance to the style.

In 1899 New York, the better the headline, the more newspapers are sold. The 100 "papes" news boys purchase for 5a0 cents to resell helps them earn enough money to get by. When publisher Joseph Pulitzer (Steve Blanchard) decides to increase the price to 60 cents, Jack Kelly (Joey Barreiro) and the rest of the newsies threaten to strike. With the help of young reporter Katherine (Morgan Keene), the newsies work to change how child workers are treated in the city.

If you've seen the movie, you know the basic story, which was based on the real-life 1899 newsboys' strike. But you probably haven't witnessed incredible Tony award-winning choreography like this before. The energy pours off the stage during every number, with scaffolding sets and projected images that help transform each scene.

Newsies' message is simple: Fight for what you believe is right. Even if the theme doesn't stick with you past the curtain call, the lyrics should. "Look at me, I'm the king of New York" or "Open the gates and seize the day" will probably be stuck in your head for days. (Missy Bird)
Broadway Across America: Newsies @ Capitol Theatre, 50 W. 200 South, Salt Lake City, Aug. 25-28, Thursday, 7:30 p.m.; Friday & Saturday, 2 & 8 p.m.; Sunday, 1 p.m. SaltLakeCity.Broadway.com

FRIDAY 8.26
Utah Repertory Theatre: Cabaret
It's hard to believe that 2016 marks the 50th anniversary of the original Broadway production of Cabaret. It might be just as hard to believe how daring it was at that time. From its subject matter—placing issues like anti-Semitism and abortion in the typically happy-go-lucky realm of musical theater—to the scandalously racy costumes, that original production took plenty of risks on its way to winning eight Tony Awards, inspiring an Oscar-winning movie and becoming one of the modern musical classics.

But there's more than nostalgia to Utah Repertory Theatre's current production. The story might be set in Weimar Republic-era Berlin—as expatriates like American writer Cliff Bradshaw and British singer Sally Bowles experience the swirling unrest of the Nazi Party's rise to power—but there's some powerful contemporary resonance to a story of people watching the rise of a fascist movement while assuming it can't possibly get that bad. And that's on top of the pure pleasures of appreciating the classic John Kander/Fred Ebb songs like "Wilkommen," "Don't Tell Mama," "Two Ladies" and "Cabaret."

Utah Rep's own twists on this groundbreaking show include offering cabaret table seating that allows audience members to interact with the performers as though they were patrons of the Kit Kat Klub, and gender-bending the role of the Emcee with the casting of talented local actor Teresa Sanderson. Celebrate Cabaret's landmark birthday with a reminder of theater that takes chances, telling stories that continue to tell us about ourselves, as much as we might wish otherwise. (Scott Renshaw)
Utah Repertory Theatre: Cabaret @ Sorensen Unity Center Black Box Theatre, 1383 S. 900 West, Aug. 26-Sept. 11, Friday-Saturday, 7:30 p.m.; Saturday matinee, 2 p.m.; Sunday, Sept. 11 matinee, 3 p.m.; $17-$35. UtahRep.org 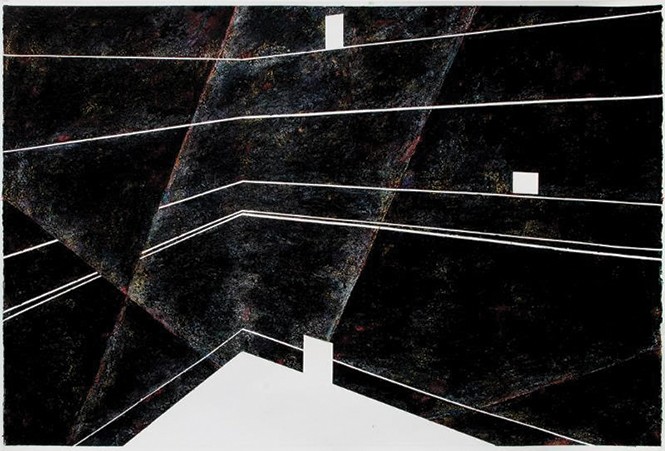 FRIDAY 8.26
Andrew Rice: (re)Structured
The spaces in which we spend the duration of our existence can be a shell, or a hell. Local artist Andrew Rice's work delineates the ways the very structures of buildings shape our experience—the ways their angles and corners, nooks and crannies are protective but also can keep us isolated, separate. In his exhibit (re)Structured at the Utah Museum of Contemporary Art's Projects Gallery, his collagraphs—made with oil sticks—create a multi-textured surface that is reminiscent of his other favored medium, printmaking.

Even though these textures are often rich and layered, they ultimately have the effect of increasing the weight and the thickness of the walls, rendering them more impenetrable and solipsistic. The ambiguity these pieces produce might best be termed "comfortable claustrophobia." It appears to be an "interior design" in the psychological sense, but one that might prompt an escape from its suffocating embrace.

Perhaps the inaccessibility portrayed is even deeper, depicting the layers of self we hide from ourselves; the quietude of his forms invites contemplation. In any event, the implied narrative is somewhat obscured, even as the artist's technique is deliberate and methodical, and all the more intriguing because of it.

Some of these works were seen in Redefining Structures, in tandem with prints by Justin Diggle, at the downtown library, and also premiered at a pop-up event Aug. 19 at Art Central on Broadway. (Brian Staker)
Andrew Rice: (re)Structured @ Utah Museum of Contemporary Art, 20 S. West Temple, 801-328-4200, through Oct. 8; opening reception Friday, Aug. 26, 7 p.m. UtahMOCA.org

SATURDAY 8.27
The Rose Exposed: Flight
Think of The Rose Exposed experience as a tapas bar of the arts—a place where you can get a little theater, a little dance, a little live music. Each year, the Rose Wagner Performing Arts Center uses the event as a way to sample the venue's artistic offerings through an evening of original 10-minute works by all six of the Rose's resident companies: Gina Bachauer International Piano Foundation, Pygmalion Theatre Co., Plan-B Theatre Co., Ririe-Woodbury Dance Co., Repertory Dance Theatre and SB Dance.

It's a great time for people unfamiliar with the Rose to enjoy an inexpensive evening of amazing performances. And it might just turn some theater lovers into dance enthusiasts, or vice-versa. There will also be live piano accompaniment of all performances coordinated through the Gina Bachauer Foundation, with pianist Koji Atwood and a young competitor from this year's Gina Bachauer International Piano competition, Junhao Wang.

Each year, The Rose Exposed chooses a beneficiary and a theme for the performance. This year, with proceeds going to Tracy Aviary, the theme guiding each original work is Flight. For example, playwright Jenny Kokai took that idea and created Bird Brains for Plan-B Theater (their 2015 performance is pictured). What exactly Bird Brains is about—or what we're likely to see from any of the companies—is a bit of a surprise, and part of the excitement of the experience. For a sneak peek, the public is invited to walk through the Rose studios during the day on Saturday, Aug. 27 to watch the rehearsals in progress. (Katherine Pioli)
The Rose Exposed: Flight @ Rose Wagner Performing Arts Center, 138 W. 300 South, 802-355-2787, Saturday, Aug. 27, 8 p.m., $15. ArtTix.ArtSaltLake.org