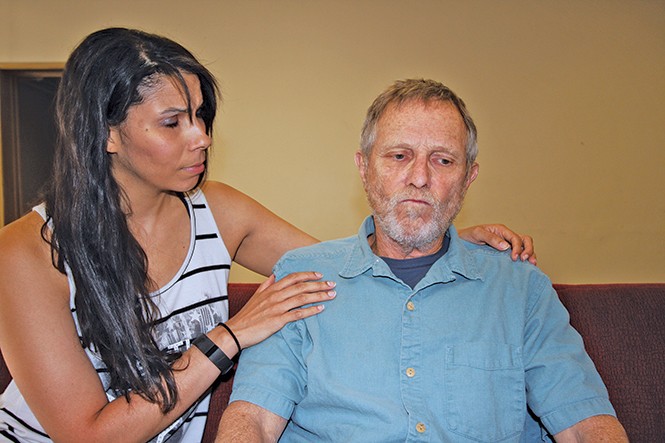 THURSDAY 8.4
People Productions: The Witness
Many of history's most horrifying tragedies have been captured in iconic photographs, like a terrified 9-year-old girl fleeing a napalm attack in Vietnam. But many of the people captured in those photographs lived afterward. How does life go on after surviving a nightmare?

In her 2012 play The Witness, Vivienne Franzmann speculated on the aftermath of a heartbreaking real-life photo from the 1994 Rwandan genocide, which showed a crying baby reaching across a pile of corpses, trying to get to her dead mother. Franzmann imagines that the orphaned girl, here named Alex, was taken in by the British photographer, Joseph, who captured that image. Twenty years later, Alex has been living a comfortable life, and is returning home after her first year at Cambridge—but the ghosts of her past still haunt her, especially as she comes to wonder if secrets are hidden just out of frame in that famous photograph.

People Productions artistic director (and this production's director) Richard Scharine finds plenty of thorny issues in the play's moral questions, including America's own guilt over not interceding in Rwanda. "The dramatic power behind the play is a question of where guilt and family coincide," Scharine says in an email reply. "I'm not sure I believe in God, but I do believe in the Taxman—that sooner or later, someone will show up at the door and demand to see the books. Sooner or later you have to face the consequences of your actions." (Scott Renshaw) 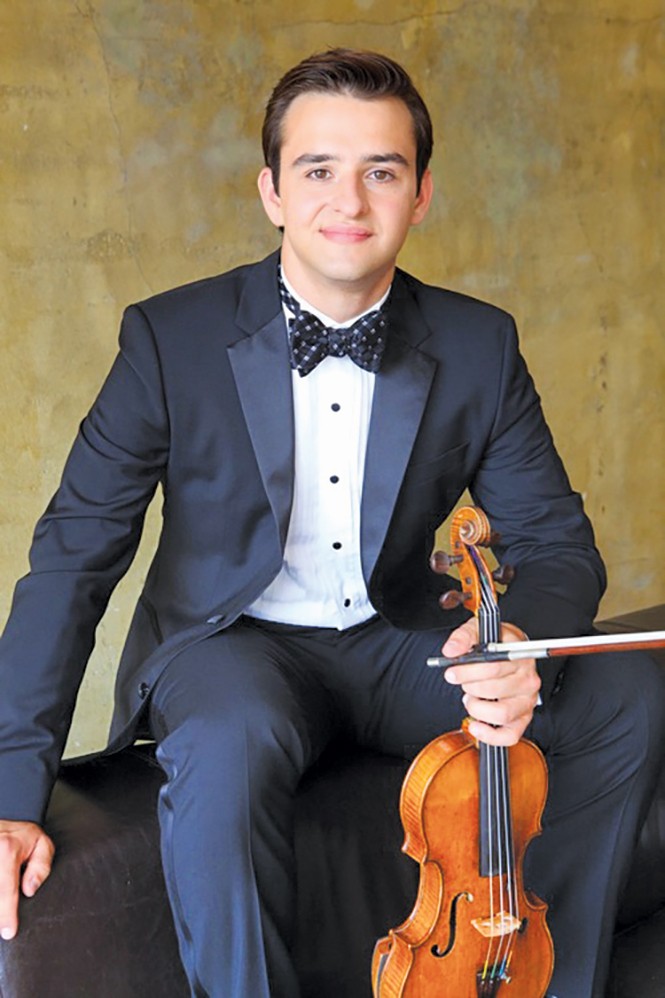 FRIDAY 8.5
Utah Symphony: Tchaikovsky's 1812 Overture
Salt Lake City's beautiful Abravanel Hall—home to the Utah Symphony—is a magnificent place in which to enjoy classical music. There are, however, limitations to any venue. For instance, it's not the best place for firing off cannons.

Deer Valley's Snow Park Amphitheater, however, is a perfect place for musical munitions, as the Deer Valley Music Festival hosts the Utah Symphony's performance of Pyotr Ilyich Tchaikovsky's famous 1812 Overture, under the baton of Rei Hotoda. It has become a crowd-favorite staple over the years, as one of the best-known pieces of music in the symphonic canon—yes, pun intended—sets the mountain air ringing with actual cannon fire (courtesy of Cannoneers of the Wasatch) during its climax. You'll feel like you're there on the battlefield, defending Mother Russia against the invading army of Napoleon, in a victorious battle Tchaikovsky was commemorating with his 1882 composition.

The evening's program includes a number of other highlights to get even more bang for your buck. Utah native Will Hagen (pictured) visits as soloist to perform Tchaikovsky's Violin Concerto in D major. And, in honor of the Summer Games getting underway in Rio de Janeiro, John Williams' Olympic Fanfare and Theme—written originally for the 1984 Summer Games in Los Angeles—will also be featured. Rounding out the program are Shostakovich's Festive Overture, Borodin's Polovtsian Dances from Prince Igor, Khatchaturian's "Adagio of Spartacus and Phrygia" and Sousa's Washington Post March. Head up to Park City for an evening of triumphant music. (SR) 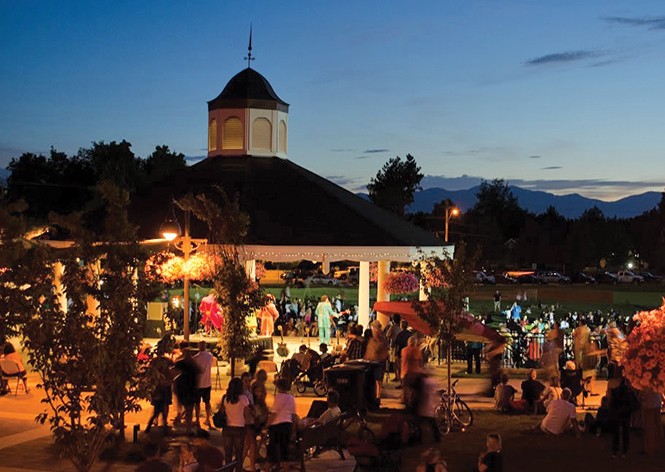 SATURDAY 8.6
Holladay Blue Moon Arts Festival
Waiting is hard. Sometimes that's what makes the thing you're waiting for more valuable, like it does with blue moons; other times it simply drains your patience. Thankfully, you don't have to wait for any lunar phenomena to enjoy Holladay's annual Blue Moon Arts Festival.

An actual blue moon won't be making an appearance at this year's festival. However, it has headlined the event a few times in the past, as it did in 2012, which gave the festival its name. Now, coincidental blue moons are simply a nice bonus to the regular festivities.

Judging by attendance, the event is worth it even without one. Margo Richards, Holladay City's Arts Council coordinator, says, "It doesn't seem to matter when it's held; the community comes together for a fun-filled day of music, artisan booths, food, free kids crafts, beer and wine." Given the wide variety of activities, the festival's popularity probably shouldn't be too surprising. For its current iteration, all of the festival's music will come from local entertainers, including Tamarra Evans, Excellence in the Community, Hot House West and Joshy Soul and the Cool.

A small firework show ends the festival activities, so feel free to sit back and enjoy the lights sparkling against the night sky. Even without a blue moon in the background, the setting shouldn't disappoint. "When you are on the lawn watching the concert with Mt. Olympus as a backdrop, it just doesn't get any better," Richards says. (Casey Koldewyn) 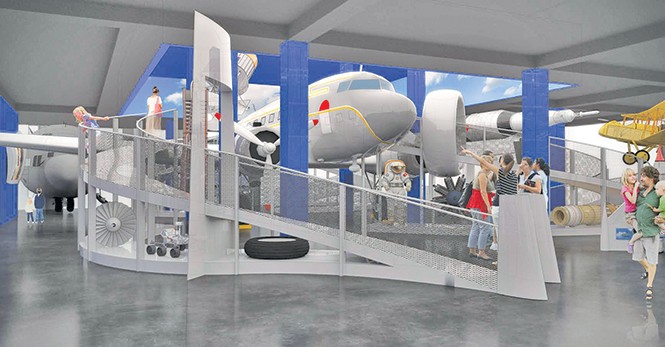 SATURDAY 8.6
Flight
The Leonardo has hosted a number of large, well-received traveling exhibits, such as Body Worlds and Dead Sea Scrolls. This week, the downtown museum that connects science and technology with creativity and art is opening its very own gigantic exhibit.

Flight will be a permanent exhibit at The Leonardo—in part because, once you've knocked out some walls to fit a C-131 military aircraft inside the building, you're probably going to want to leave it there for a while. The plane, which moved into the museum in June, measures 105 feet, 4 inches from wing-tip to wing-tip, and has just 6 inches of clearance to the walls of the museum on either side.

The plane is just one of the attractions that make up Flight. Visitors can immerse themselves in the world of animal flight, or fast-forward to future long-term explorations of space. There will also be a "Tunnel of Dreams" that covers the history of flight and those who studied it—including the museum's namesake, Leonardo da Vinci. The Tunnel exits into a 1969 replica living room, where guests can watch the first moon landing.

Those who dream of flying can try the two "hyper-realistic" flight simulators on display to get the feel of what it's like to be in control of a plane. The Rockwell Collins simulators are the same type used to train pilots.

The exhibit is included with general admission to The Leonardo, which offers many other exhibits and activities such as Perception and Leonardo's Studio. (Geoff Griffin)