Liven up your weekend with our 10th annual Beer Fest and other stellar events. 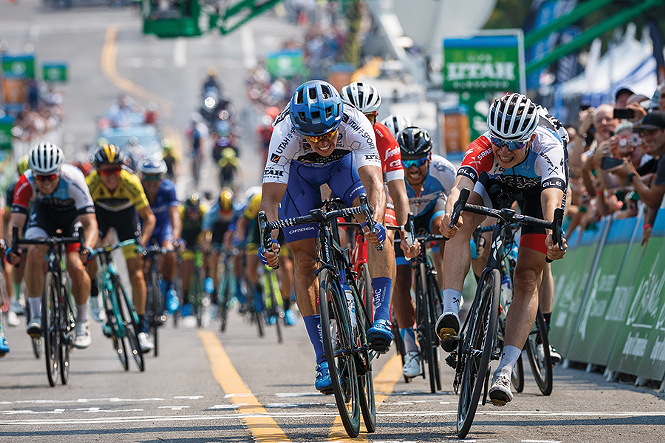 THURSDAY 8/15
Tour of Utah
There are few challenges in the world of sport that equate with the Tour of Utah, a formidable week-long cycling competition featuring 117 world-class athletes from 24 countries—among them, two riders from Utah. Requiring both daring ability and dexterity, it finds 17 teams tackling one of the most gruelling racing courses in the country, a route that ascends a total of 37,882 feet over the course of 477 miles that stretch from Logan to Antelope Island, and from downtown SLC to Park City. Little wonder that after 15 years, it's earned the title of "America's Toughest Stage Race."

Although the scenery itself could prove distracting, the Tour of Utah, like other renowned races, is more than a mere spectator sport. It's an opportunity to share pride in our surroundings with veterans of some of the most prestigious competitions the world of bicycle racing has to offer.

"The Tour of Utah brings world-class, professional cycling teams to Utah,and showcases our beautiful state as a postcard to the world," John Kimball, managing director of the Tour of Utah, says via email. "The start and finish lines are a hub of activity that include giveaways, autographs from the riders, entertainment, kids' bike races, live big-screen broadcast coverage of the entire race and an interactive festival area. It's all free and a great way to enjoy race day."

It might be family-friendly, but the skill shown by these athletes certainly is much more than kid stuff. (Lee Zimmerman)

Lenise Peterman, Helper mayor and festival organizer, says the festival is a celebration of the local artist community and the city as a whole. "Frankly, we have seen a downturn economically—we've been suffering that for the past 10 years," Peterman says. "The resilience of coming together to celebrate the arts, and especially getting to our 25th year ... just really exemplifies our community's commitment to the community itself and also to the arts."

In addition to artisans and musicians livening up Main Street, this year features a performance ofA Midsummer Night's Dreamby the Grassroots Shakespeare Festival, a traveling theater troupe specializing in encouraging audience interaction and improvisation in the Bard's plays. They perform in a vacant lot just off Main Street at 11 a.m. on Saturday.

Peterman says this year also marks the return of the popular Helper Idol, a local riff on American Idol. While preliminary auditions take place a few weeks before the event, attendees can see the best singers around belt their way to cash prizes. For those interested in watching, the top 10 finalists perform Saturday evening. (Kylee Ehmann)

FRIDAY 8/16
Richard Russo: Chances Are ...
Richard Russo—the Pulitzer Prize-winning author of Nobody's Fool, Empire Falls and Bridge of Sighs—has always written his characters with a generosity that allows them their faults and foibles while recognizing their attempts to keep growing. In his new novel Chances Are ... , Russo takes on the tale of three men looking back to a time that changed them all, but without bathing in hazy nostalgia.

Lincoln, Teddy and Mickey were best friends at a New England liberal arts college in the 1960s, scholarship students at a place full of wealthy prep-schoolers. Forty years later, the men reunite at the same Martha's Vineyard beach house where they once spent their pivotal post-graduation summer. It was there that they spent a final time with the fourth member of their unofficial clique: Jacy, the girl that all three of them loved. And it was there that something happened that would change the course of all of their lives.

Russo fashions Chances Are ... as a kind of cozy mystery, yet the revelations about what took place in the summer of '71 aren't ultimately the focus of the story. Instead, it becomes a tale of the natural moments of reflection that come about when people reach the beginnings of old age, and how unsettling the prospect of major change can seem. As these characters wrestle with regret and uncertainty, they emerge through Russo's simple prose not as annoyingly self-absorbed representations of aging Baby Boomers, but as men trying to understand that it's not too late to be better versions of themselves. (Scott Renshaw)

SATURDAY 8/17
Utah Beer Festival
A decade ago, it felt kind of crazy to be imagining Utah as a place that would host a major celebration of the art of brewing. Now, as the City Weekly Utah Beer Festival hits its 10th anniversary, it stands as a representation of a local beer-enthusiast culture that has given rise to an explosion in new local micro-breweries, and brand-new craft beverages appearing on an almost daily basis.

For this year's installment of the Beer Festival, nearly 60 creators of beers and hard ciders from around the country bring their wares to the Utah State Fairpark—more than 200 different brews in all representing everything from household names like Guinness to newer Utah establishments with exciting new offerings. Whether you want to try a wide variety of 5-ounce sample sizes or settle in with a 12-ounce draft of your favorite frosty beverage, there's a perfect way for you to enjoy what the vendors have to offer while paying with your reloadable wristband.

Even if you're a non-drinker or a designated driver, there are plenty of ways to enjoy the event. Check out a variety of vendors, or enjoy food from more than a dozen local vendors, including Lucky Slice, Fatty Tuna Sushi, Jamaica's Kitchen and Dough Gods Edible Cookie Dough. In addition to live music and DJ performances on two stages throughout the two days of the festival, you can even stick around for after-party concerts headlined by Royal Bliss on Saturday and Jagertown on Sunday. Raise your glass to another decade of brewing up this great weekend of frothy frolicking. (SR)