The Essential A&E Picks for August 9-15

FRIDAY 8/10
1812 Overture
These days, it's difficult to find many areas of common ground between Russia and the U.S.—other than the bromance shared by their respective presidents. However, it's interesting that the 1812 Overture evokes such patriotic pride for both nations.

Written in 1880 by composer Peter Ilyich Tchaikovsky, the composition commemorated Russia's defeat of Napoleon's French army in 1812. When it debuted in 1882, it was ceremoniously pronounced Russia's new national anthem, and though it went through various permutations over the years, it returned to prominence after the fall of the Soviet Union.

It's also become one of America's unofficial Independence Day theme songs, a tradition that started in 1974 when Arthur Fiedler included it in a July 4 Boston Pops performance. That "dada dada dada dum dum dum" refrain is now an indelible part of the classical music hit parade, prompting rock renditions, film-score sequences and even an intro to the video game Farscape.

"Deer Valley Music Festival audiences have, by popular demand, made our1812 Overtureconcert an annual tradition," says Toby Tolokan,the symphony's vice president ofartistic planning. "While other orchestras may program a shortened version, our audience will hear every note composed by Tchaikovsky in a truly complete performance. And, thanks toCannoneers of the Wasatch, the audience will also experience the thundering cannon shots that Tchaikovsky wrote into the grand finale."

Tolokan also notes that Ben Beilman, a violinist who has earned acclaim with other orchestras, makes his Utah Symphony debut with this latest rendition. (Lee Zimmerman)

FRIDAY 8/10
Craft Lake City DIY Festival
Salt Lake City is a complicated place, and people intimately familiar with the city often have complex relationships with it. Craft Lake City's DIY Festival is all about this synergy—channeling what's already inspiring about SLC into an even more beautiful, diverse and creative place.

The DIY Festival was founded 10 years ago by SLUG Magazine Executive Editor Angela Brown. As she says, "It's not just me. It's the community. It's people who have loved the festival, who have attended, who have wanted to be part of something bigger than themselves and to encourage the creative community that wants to thrive here in Utah."

Anyone is invited to be part of the DIY community, whether as new artisans brought on board via the festival's mentorship program or those who have attended for years. A sponsored-family program will help folks with attendance costs, and Kid Row targets young artisans' creativity. At the West Elm Workshop Area, after reserving space in advance online, anyone can learn new crafting skills and take home a few creations they put together themselves. Partnering with several local artistans, workshops include botanical watercolors with Laura Muir, journal making with the University of Utah's Book Arts Program, and sun-printed cyanotypes with photographer Chris Blackburn.

Be part of the community making SLC a place we can all be proud of. "We have an incredible pool of beautiful, interesting and unique individuals here that are doing unique and interesting things," Brown says. "I want someone of that mindset to come [to the festival] and think, 'Maybe Utah is different.'" (Casey Koldewyn)

SATURDAY 8/11
Jackie Kashian
On her most recent comedy CD, 2017's I Am Not the Hero of This Story—recorded just a few months into the Trump administration—Jackie Kashian (pronounced KAY-shen) recounts that much of her originally planned jokes went out the window. "I don't do political material," Kashian says, "but I do now, I guess, because I'm human. Because I'm alive, and in America. ... Did anyone else call it that we would be the bad guys in World War III?"

That ability to re-invent herself and adapt to a changing world is part of what has allowed Kashian to enjoy a career in comedy for 30 years, including four full-length recordings, multiple appearances on late-night talk shows and a Comedy Central special. She was even an early player in the comedy podcast game, and is now in her 13th year of recording The Dork Forest, in which she brings on celebrity guests—including fellow comedians and comedy writers like Karen Rontowski, Mike Drucker and Al Madrigal—to discuss their most cherished obsessions, from music to games to weird mythology.

Still, it's at the stand-up game that the Milwaukee native excels, using personal storytelling to find the laughs in everything from sexual experimentation to impending menopause to her grandmother's survival of the Armenian genocide. But she's at her best when skewering herself, including her relatively late marriage and subsequent unlikelihood of having babies: "I have, like, four eggs left, and they're marinating in extra chromosomes. ... We are not what Jeff Goldblum was thinking of when he said, 'Life finds a way.'" (Scott Renshaw) 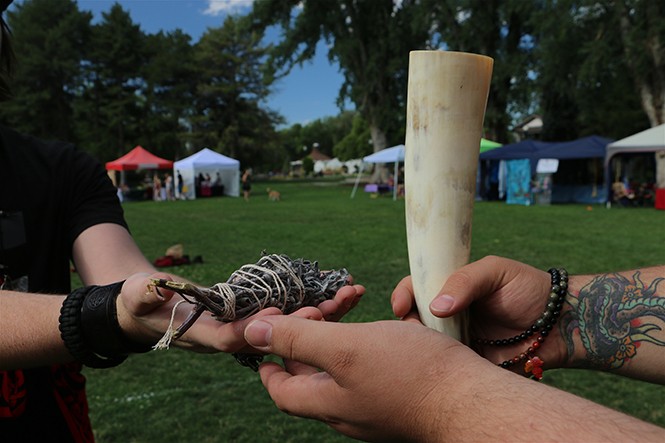 "I've seen positive change," Hurst says this time around. "More and more people are coming out of the closet, so to speak. When I'm teaching a class, there are those questions that will come up: 'I've heard that [paganism] was this.' Things do get twisted around. But over the last few years, I've had less of that type of questioning."

Education—both for those who are curious about exploring earth-centered spirituality themselves, and for those who just want to be better-informed—is one component of the annual Pagan Pride Festival, but certainly not the only one. Thirty vendors offer a wide range of items and supplies, practitioners conduct workshops and worship services, and live music and spoken-word performances provide entertainment.

Most important, however, is the chance to show visitors of all kinds that "pagan" doesn't need to be a dirty word. "People need to realize, we're just like they are," Hurst says. "We just think outside the box. And sometimes it's very hard for people to think outside a box. ... But I got a really cool message from someone last year, saying, 'Thank you very much for the opportunity that I learned so much more than I did before.'" (SR)