Christmas in Color, The Sting & Honey Co.: This Bird of Dawning, Utopia Early Music: A Celtic Christmas, and more.

FRIDAY 12/20
Christmas in Color
There are plenty of things that remind us of joyous holiday traditions and memories: the scent of peppermint; the ringing of bells; the magic of twinkling lights. Returning to Utah this year is the drive-through light show Christmas in Color. More than 1.5 million lights are arranged throughout the Salt Lake County Equestrian Center infigures of snowmen, candy canes and arched pathways. During the enchanting drive, synchronized music plays on your own car radio (channel provided after ticket is scanned), giving you extra holiday spirit.

"Christmas in Color takes the time-honored holiday tradition of looking at Christmas lights and sets it to music. Our goal is to give families a way to create unforgettable Christmas memories together without ever having to leave the warmth and comfort of your car," the attraction's CEO Todd Glover says via email.

All regular sized trucks, vans and cars are welcome. Prices don't vary per person, so pack your vehicle with friends and family (though they urge you to "keep it legal"). A "happy hour" is available daily within the first hour (5:30 & 6 p.m.), allowing visitors either to see the show twice, or bring a second vehicle for free admission. Purchasing advanced tickets is encouraged, as the price at the gate is more expensive and the wait is longer.

This event is a perfect way to enjoy the colors of the holidays. And better yet, you can add a brand new holiday family tradition to your list. (Kara Rhodes)

FRIDAY 12/20
The Sting & Honey Co.: This Bird of Dawning
In a place like Salt Lake City, the winter holidays—with their traditional, potentially dominating Christian rituals—evoke a wide range of emotions. For the past 11 years, Javen Tanner, Sting & Honey Co.'s artistic director, has led a production that includes those rituals—but perhaps not in the way most would expect.

Through music, poetry and mask, This Bird of Dawning tells the story of Christmas. More than that, though, it tells the story of the ritual surrounding that story. "One of the most gratifying things about the show, for me, is that it has connected to both Christians and non-Christians," Tanner told City Weekly in 2018. "The piece does not preach, but it unabashedly digs deep into the ritual of the story."

Tanner first presented This Bird of Dawning in Manhattan before co-founding Sting & Honey in SLC. Elements of the show have changed over the course of its 11 years, and the performers have rotated. What has remained, though, is the approach that sets this production apart: Through its blank masked-performers and reverent atmosphere, ritual is foregrounded. "Though the piece is quiet, the ritual endows it with a kind of wildness you rarely get from contemporary theater," Tanner says. "In that respect, I think of This Bird of Dawning as an act of heresy against the humdrum hegemony of the theatrical establishment. I think Jesus would like it. I think Dionysus would, too." (Casey Koldewyn) 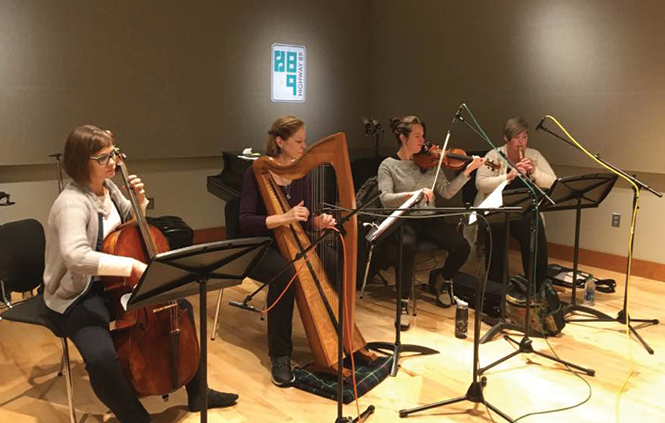 SATURDAY 12/21
Utopia Early Music: A Celtic Christmas
America has its own Christmas traditions, but much of what we embrace comes from the countries of our oldest ancestors. Indeed, the heritage of Celtic music continues to loom large in our modern day festivities, specifically the beautiful carols, folk songs, reels and lullabies that add such a rich flavor to our holiday cheer. With origins spanning England, Ireland, Scotland and Wales, to the coast of Cape Breton in Canada, these melodies stretch back centuries, but never go out of style.

Utopia Early Music shares that Old World wonder by transporting audiences on a trip through time—from the early origins of Celtic music in the Middle Ages through the stirring sounds of the 19th century. Along with Utopia co-founders soprano Emily Nelson and tenor Christopher LeCluyse, visiting vocalists and musicians will maintain Utopia's reputation for excellence and authenticity.

"Our program ranges from gorgeous medieval chants to brilliant fiddle tunes," Nelson notes in an email. "This show has a strong element of folk music because the main repository of Celtic music from the past is really stored in people's heads, in oral history. I just love singing this kind of music because it's so deeply soulful and emotionally connective. To me, doing this concert will be the perfect way to celebrate the season." (Lee Zimmerman)

SATURDAY 12/21
A Charlie Brown Christmas
In 1965, Charlie Brown first ruminated on national television that holiday commercialism was leaving him depressed. Lucy, Charlie's friend and self-styled psychiatrist, responded to his melancholy by suggesting he direct the community's Christmas play.

As the first Peanuts TV special, based on the comic strip created by Charles M. Schulz, it found a place the hearts of viewers enamored with the precocious children and the iconic music by Vince Guaraldi.

For one day only at Eccles Theater, the national touring company of A Charlie Brown Christmas stops by Salt Lake City to continue the spirit of the Peanuts gang for two performances. They'll feature an expanded storyline, more musical numbers and offer further introspection into the true meaning of Christmas. The audience, too, is invited to sing the cheerful and beloved songs of the season.

Although not fully costumed, the actors are committed to maintaining the integrity of the characters' familiar personalities and existential viewpoints. For a story that's been adored for more than half a century, this 90-minute show with intermission certainly appeals across generations. (Miacel Spotted Elk)